Wall Street pros refer to these as “special-situation” investments.

Why these aren’t on more investors’ radars is because these events are mainly reported as news.

At TradeSmith, with our team of experts and proprietary trading tools, we’re able to go beyond the news and let you know if there is a potential profit opportunity.

With this issue of Special-Situation Central, the team compiled a list of three companies that could be acquired over the next year by larger firms. All three companies offer something unique, ranging from one-of-a-kind sports content to a rich library of hit TV shows to potential treatments for a rare disease.

Of course, as we mentioned earlier, these are far more than just news events.

To get a deal done and win shareholder approval, the company making the acquisition will often offer a nice-sized premium from where the stock price of the acquisition target is trading.

For example, Microsoft Corp. (MSFT) is trying to acquire Activision Blizzard Inc. (ATVI) for $95 per share, 23% higher than ATVI’s stock price as of this writing. Some companies may be willing to pay an even higher premium than that.

And with recession and stagflation fears still following us into 2023, finding pockets of potential double-digit winners in a short time can’t be ignored.

Now, there’s obviously risk involved in just buying a company based on the idea that it could be a takeover target as there’s no guarantee that any of these companies will be acquired. But because you’re reading this right now, what you have on your side is our Health Indicator and Volatility Quotient (VQ). You can quickly see how a company stands on its own merit through its health and the risk level associated with investing in it.

You also have one of our newest experts, Quantum Edge Pro Editor Jason Bodner, to weigh in on one company in particular, as it has been all over the news after a former CEO returned to the company as a board member.

Hedge funds pay tens of thousands of dollars a year for his analytics, and his paid-up members have gotten the first taste of his investing acumen.

He’s seeing some unusual buying activity for this company, and we’re going to give you the inside scoop.

What to Know: The global video-streaming market is projected to soar from $473.39 billion today to $1.69 trillion by 2029. And what’s needed to capture the majority of that money up for grabs is exceptional content… Content that is exclusive to a particular streaming service – like sports.

Google just inked a $2 billion deal with the National Football League (NFL) to stream its Sunday Ticket package on YouTube TV starting in 2023, and there will be more companies looking for sports content.

World Wrestling Entertainment Inc. would be a crown jewel of original sports content for Amazon, Walt Disney, Alphabet, Apple, Netflix, or any other potential suitors. The company broadcasts its shows to more than 180 countries in 30 languages and to 1 billion households worldwide each week.

In terms of WWE being up for sale, even before founder Vince McMahon retired, then-President and current co-CEO Nick Khan said in July 2022 that the company wasn’t actively pursuing a deal, but that it was “open for business” and that if somebody called, he would listen.

The stock price received a jolt (climbing to an intraday high of $89.43) on Jan. 6 when it was revealed that McMahon would return to WWE as a board member and would be looking at strategic alternatives to maximize shareholder value. In other words, he could be looking to sell the company.

On its own merit, WWE is currently considered a “buy,” being in our Green Zone. It’s considered a medium-risk investment by our Volatility Quotient (VQ) tool, and it pays a dividend with a yield of 0.53%.

Jason’s Take: “Consumer service companies, specifically entertainment and programming providers, have been seeing unusual buy signals lately. WWE has appeared on my top 20 report 27 times since July of 2014. It has great fundamentals, visible institutional support, and a high Quantum Score of 82.8.”

Generally, a high score in Jason’s proprietary trading system of over 70 is really good… and anything over 80 is great.

In the chart below, you can see where the green and red lines are signaling unusual buying and selling activity, with several buy signals popping up on Jason’s radar in 2022, as well as that large amount that has just happened in January 2023.

Something big could be afoot, especially with WWE expected to report earnings near the start of February.

AMC Networks Inc. (not to be confused with AMC Entertainment Holdings Inc., the movie theater company) had a rough 2022, with Christina Spade becoming the CEO in September and abruptly stepping down in November, the hit series “The Walking Dead” coming to an end, and AMC planning to write down up to $400 million in content-related moves.

AMC also planned to reduce 20% of its staff in the United States.

But with all of that in mind, for a larger company looking to win in the streaming wars, AMC is still a treasure trove of content with “Mad Men,” “Breaking Bad,” “Better Call Saul,” and “The Walking Dead.”

It also has spin-offs to add to “The Walking Dead” universe, as well as its Anne Rice Immortal Universe franchise that already launched Anne Rice’s “Interview with the Vampire” in October 2022.

As of September 2022, the company had 11.1 million paid subscribers for its streaming service, AMC+, which was a 44% increase from the previous year.

On its own, our tools say that AMCX is currently not a buy, as it’s in our Red Zone on top of having a high-risk rating from our VQ tool. For risk-averse investors, this would be more of a company to add to a watchlist to see if AMCX turns things around on its own or receives takeover interest.

Horizon was an attractive takeover target because its medication Tepezza was the first one ever approved for treating TED.

Currently, the medication is only approved for treatment in the United States, but plans are to make Tepezza globally available, which could generate peak revenue of $4 billion. 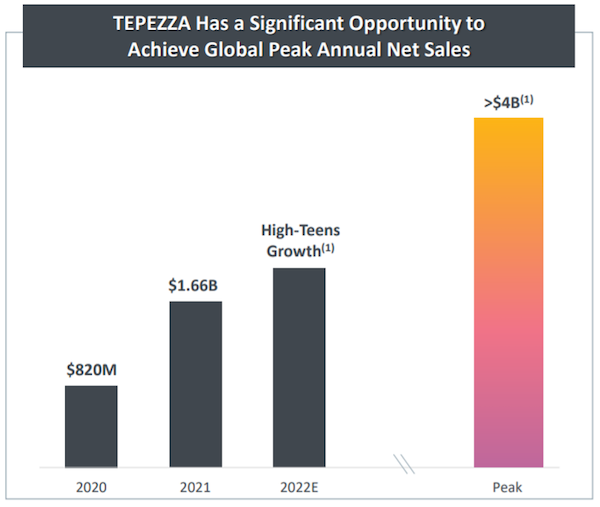 Source: Horizon Therapeutics
But Johnson & Johnson and Sanofi were also interested in Horizon.

So, since these two companies missed out on Horizon, a nice consolation prize could be Viridian Therapeutics.

VRDN is in our Green Zone, but this is not a company for a risk-averse investor. It has a sky-high-risk VQ at 73.72%.

We hope this can be an aid in your own research, and we’ll back tomorrow.