The U.S. dollar is headed lower. And as we'll show you today, that should support a continued rally in gold...

This past weekend, Japanese Prime Minister Fumio Kishida said he would nominate a new candidate for Bank of Japan ("BOJ") governor in February. Haruhiko Kuroda, the central bank's current head, is scheduled to depart by April 8.

We've talked before about how Governor Kuroda has favored "easy money" policies for years... and how that has weighed on the yen.

This is important as it relates to the outlook for the greenback. Take a look at the following chart of the Intercontinental Exchange's U.S. Dollar Index. It's made up of six different currencies... 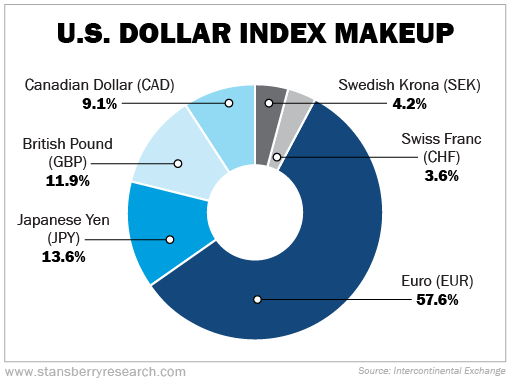 As you can see, the Japanese yen holds the second-largest weighting in the basket behind the euro. So, any changes (up or down) in the yen will have an opposite impact on the dollar's direction.

Governor Kuroda has favored a dovish monetary policy ever since he took office. That means he has been in favor of low interest rates as well as pumping stimulus into the country's financial system to stimulate economic growth. The problem with that policy is that it keeps the yen weak and the cost of goods high.

The early indication is that the Japanese government and central bank members want a more hawkish governor – one who is inclined to raise interest rates. This would weigh on the dollar and support the outlook for precious metals like gold and silver...

Kuroda took over as the BOJ's governor in March 2013. He was nominated for a five-year term by then-incoming Prime Minster Shinzo Abe, who later endorsed Kuroda for a second term as governor.

But Abe wanted Kuroda as governor for exactly the policies he pursued – he wanted the central bank to flood the world with yen. 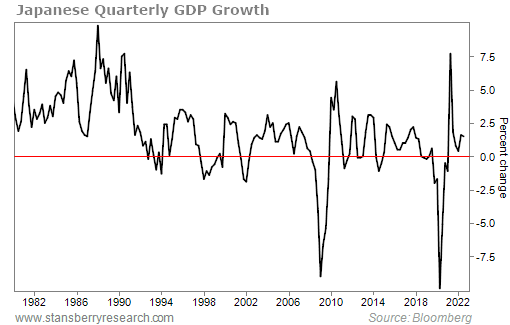 However, rampant speculation, loose monetary policy, and an overflowing money supply caused asset prices in the country to skyrocket. The BOJ was forced to raise interest rates to cool demand and economic growth. The country's stock markets tumbled, dragging the growth with them.

Japan's economy was based on exporting goods abroad. A weak currency meant it was cheap for foreigners to buy Japanese-made goods. Due to the rate tightening, the yen strengthened from around 277 per dollar in 1982 to a low of almost 75 per dollar in 2011. Remember, when it takes fewer yen to buy a dollar, its purchasing power has increased. 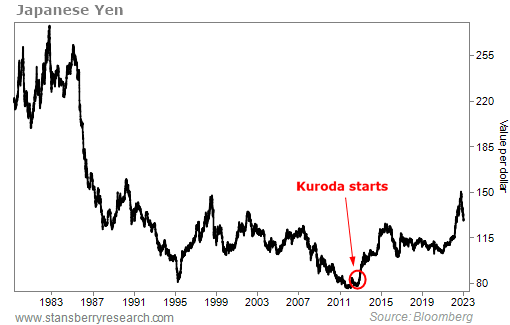 When Abe was elected, he decided the best way to stimulate the country's economy was through an easy-money monetary policy. The BOJ had been wary of its past, not wanting to fuel rampant speculation and create another asset bubble. The prime minister decided the central bank needed new thinking, hence the appointment of Kuroda.

As you can see in the chart above, the new BOJ chief didn't waste much time. He started down the path of easy money rather quickly. During the course of his tenure, the yen's value dropped from roughly 80 per dollar to around 150 per dollar. In other words, its buying power diminished greatly because it took more yen to purchase a dollar.

The country's economy never really saw a resurgence to its previous strength. If we go back to the chart showing Japan's quarterly GDP growth, we see that the yen had brief periods where it rebounded... but nothing sustainable.

On the other hand, toward the tail end of Kuroda's time in office, inflation has shot back up to its highest level since 1990. Take a look at Japan's Consumer Price Index ("CPI") below... 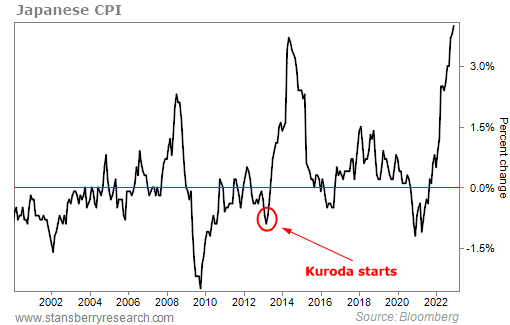 Prime Minister Fumio Kishida and BOJ board members are now questioning the value of easy-money policies. The Japanese economy isn't snapping back as they had hoped, and inflation is becoming a problem once more.

They're left with little choice but to allow interest rates to rise in an attempt to regain buying power for the yen. In fact, at the December meeting of the BOJ, it said it would allow the yield cap for 10-year sovereign bonds to double from 0.25% to 0.50%. And according to the Sankei Shimbun Newspaper, Hirohide Yamaguchi, a critic of Kuroda’s policies, has emerged as a top candidate for the next BOJ head.

As we said from the outset, a stronger yen means a weaker greenback. After all, it makes up 13.6% of the U.S. Dollar Index. But, based on the correlation between the dollar and gold, a weaker dollar should create a rally in gold... 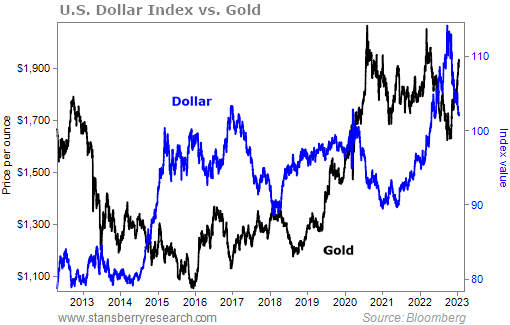 You can see how the dollar and gold tend to have an inverse relationship. When the dollar falls, gold rallies – and vice versa. That's because when the dollar holds less value, it takes more to buy an ounce of gold.

So, as our central bank appears to be taking a breather, the BOJ is headed in the opposite direction. That means investors seeking gains will be attracted to the yen. In other words, because the yield for Japan's currency is rising while ours is either flat or maybe even lower, the return potential will drive more investment in the yen.

As more money floods into the yen, it will increase its value. Meanwhile, less money going into the dollar and possibly even leaving will drive its value lower. The outcome should spell a continued rally for gold.