Signs of peak yields are proliferating... And that should boost the outlook for fixed-income investments.

Since the start of last year, there has been one important question on every investor's mind... When will the Federal Reserve stop raising interest rates? The topic is of vital importance because it's an indicator of the direction of both the bond and stock markets.

You see, bonds and yields have an inverse relationship. When interest rates are going up, the underlying bond prices fall. In other words, if you own say 10-year U.S. Treasurys with a coupon payment of 2% and you think that rate may shoot up to 4%, why do you want to hold onto an asset that returns less? You don't. So, you sell that investment and wait until the yield becomes more attractive to reinvest.

Stocks and interest-rate increases also have a relationship that is opposite in effect. When the cost to borrow rises, it makes households and businesses using credit less likely to spend. Think of it this way, if the interest payment on your credit suddenly went from 4% to 8%, you'd think twice before using. But those incremental debt-service costs weigh on corporate profits while less demand hurts sales.

So, investors uncertain about how high interest rates will go tend to sell first and ask questions later. They unload bonds waiting for rates to peak, and they sell stocks until they have a better idea of costs stabilizing. That way, they have money to invest when the environment turns.

And recent indicators point to peak rates quickly approaching. That should support a rally in bonds as well as the S&P 500 Index.

But don't take our word for it, look at what the data is showing us...

We like to follow the monthly manufacturing surveys from the regional Fed banks. They give us an idea of what business activity looks like in various parts of the country. Specifically, we follow the results from the Dallas, Kanas City, New York, and Philadelphia surveys. The states represent over 22% of national economic output.

We monitor their prices paid and received indexes. Those tell us what it costs companies to purchase raw materials to make goods in addition to what they receive for their finished product. We look at those as forward indicators of the U.S. Bureau of Labor Statistics' Producer Price Index ("PPI") and Consumer Price Index ("CPI"). That way, we have a better idea of what inflation growth looks like.

Yesterday, the Philly Fed released its survey. Here's what the prices paid index looked like... 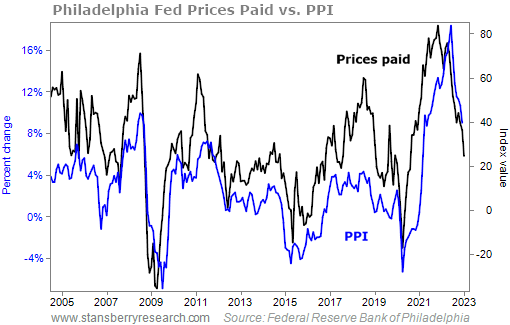 And here's the same chart for the prices received index...

As you can see in the charts above, both prices paid and prices received peaked in November of 2021. Ever since they've been in steady decline. Meanwhile, PPI didn't peak until March of last year while CPI kept rising until June. But as you can see, both have been in a steady downtrend ever since.

That's important because it tells the Fed its rate hikes are working. At the same time, it diminishes the need for future increases.

And then there's the central bank's beige book...

The publication is compiled from the 12 different Fed districts. It's released eight times a year, shortly before the rate-setting Federal Open Market Committee meets. The purpose of the report is to give policymakers an idea of what the current economic environment looks like.

On Wednesday, the summary highlighted that pricing pressures and supply-chain constraints continue to ease while slowing economic activity takes hold. Six of the 12 regional bank districts reported no change or slight slowdowns in economic activity... five reported no change or slight upticks... and one reported a significant decline. And businesses and contacts surveyed expect little growth in the months ahead.

So, while many investors may pay little attention to this report due to the lack of major macroeconomic surprises, the fact that economic activity is showing little growth is important. After all, a slowdown in economic activity is one of the explicit prerequisites the Fed is looking at as it judges just how high rate hikes must go.

This past week, policymakers have signaled the rate-hike cycle is reaching its zenith. Vice Chair Lael Brainard said recent data point to subdued economic growth this year. She stated inflation growth is slowing and it's appropriate to slow the pace of rate increases. More importantly, she noted monetary policy is closer to a "sufficiently restrictive level."

The sentiment was echoed by Boston Fed President Susan Collins. She said a measured approach to rate hikes makes more sense. She noted that it takes time for the economic fallout of these increases to be felt. But she said that once the federal funds target gets to just above 5%, compared with the current 4.5% level, it would be appropriate to stop.

Those two comments are Fed speak for we're about to hit peak interest rates. 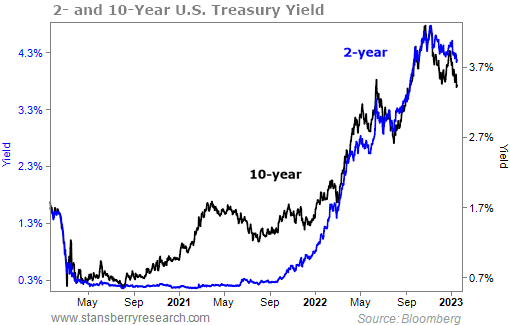 The above chart tells us bond market investors are starting to catch onto the idea that yields are close to peaking. After all, if the federal-funds target is already at 4.50% and the goal is just over 5%, that means there are roughly 50 to 75 basis points worth of rate hikes left until we're there. In other words, rate hikes at both the February 1 and March 22 meetings could be the end of the line. 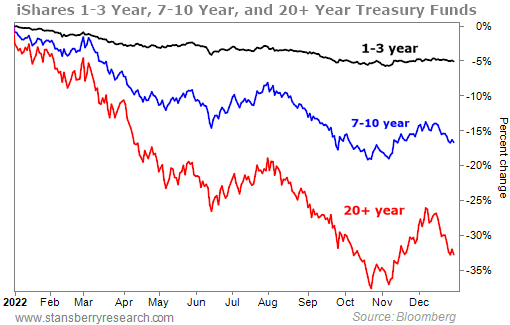 But, for those investors waiting to pounce, the moment could be nigh. If the Fed is about to stop raising rates, now could be the time to lock in high coupon payments. As we saw in the previous chart of Treasury yields, they're already starting to turn. Sure there's more room for the federal-funds range to go up but considering we went from 0% to 4.50% in 2022, the rest of the move is minor.

So, don't be surprised as yields start easing as we move forward this year. Sure the economy may slow further, but big-money investors seeking steady return potential won't want to miss out on this opportunity. They'll start with the highest-quality assets but work their way across the asset scale as they continue to seek out optimal returns.

And then as rates slide, borrowing costs for households and businesses will do the same. That will help to ease the cost of buying a car or home and paying down a credit card. The net effect will be a slow but steady turnaround in the economy. And as that plays out, it will support a steady rally in bonds as well as the S&P 500.