The Fed Cannot Rely on an Easing Labor Market

The labor market isn't as strong as you think...

Federal Reserve Chairman Jerome Powell has said he's keeping a close eye on employment figures and the ease at which individuals can find employment. Namely, the central bank is waiting on the labor market for a signal on when to ease interest rates once more.

Employment figures released today (and earlier this week) continue to show us one thing: The labor market is still fairly tight, based on existing government metrics. That would support a Fed effort to keep rates higher for longer.

However, the labor data is becoming increasingly unreliable. They don't paint an accurate picture of the current state of the economy. And this situation increases the risk of the Fed raising interest rates too high.

The longer it takes the central bank to figure this out, the more damage it could do to the economy and the stock market...

In today's December jobs report from the U.S. Bureau of Labor Statistics' ("BLS"), the establishment survey showed nonfarm payrolls increased by 223,000 last month. At the same time, the report's household survey showed the unemployment rate fell to 3.5%. Interestingly, the household survey – which has contradicted any positive sentiment since March – showed a sharp rise in employment by 717,000 jobs... 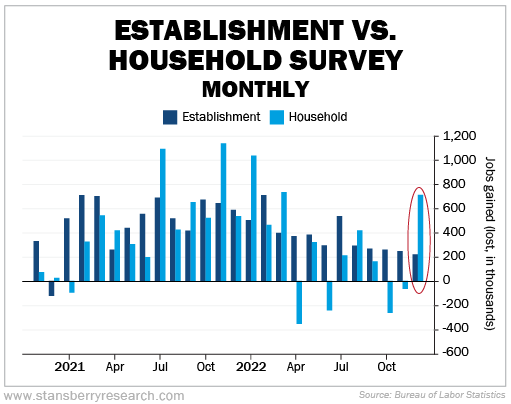 To give you a little background, the two surveys approach employment from two different angles. The establishment survey tracks jobs filled by employees, while the household survey tracks whether working-age individuals in one home are gainfully employed. So, you or I could take two jobs each, and the establishment survey would count that as four workers. However, the household numbers would only count us as each having a job – or two workers.

As mentioned above, if you compare the two since March – the same time the Federal Reserve started to hike rates – you can see a clear divergence in trend... 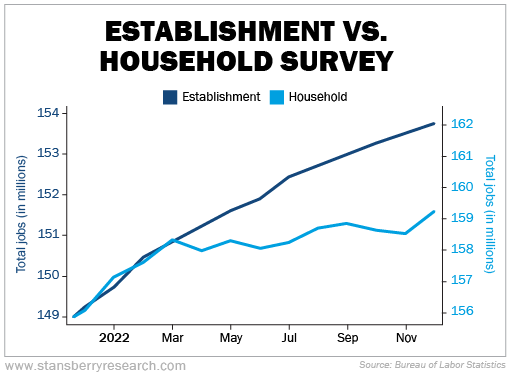 The difference between the establishment and household surveys from March through December is about 2.1 million jobs. That closes the gap of 2.7 million jobs through November. In other words, the household survey shows that the country hasn't really gained any jobs over the last three quarters.

So why suddenly did the household survey make that massive jump?

According to the BLS, "Seasonally adjusted household survey data have been revised using updated seasonal adjustment factors, a procedure done at the end of each calendar year." That means this large increase is an annual revision and does not completely reflect employment trends for December explicitly.

But if we look at the distinction of the type of jobs added since March, the outlook becomes a lot less rosy.

Since March, part-time jobholders and multiple jobholders have accounted for any and all employment gains. In fact, the latter has increased in number by 684,000... 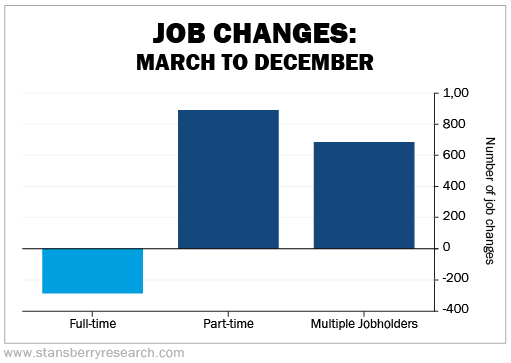 The issue with this is that the establishment survey double-counts these jobs. As such, these figures vastly exaggerate the state of the labor market and employment gains.

This could lead to the Fed overtightening monetary policy. (Remember, the central bank has told us it'll keep raising interest rates until the labor supply-and-demand picture comes back into balance.)

But the lack of consensus among multiple data points for the past year suggests a systemic shift among these metrics. Job gains may not be as strong as what the establishment survey shows. Powell has even acknowledged this likelihood during the December monetary policy meeting. He said the labor market lost 3.5 million workers due to early COVID-19 retirements and deaths – and does not expect them to return.

That means the labor supply could be structurally challenged because if we added those workers back into the labor pool, the unemployment rate would be higher than 5%. That means the Fed cannot wait for employment figures to slow down (as it historically has been accustomed to doing).

If the central bank is going to gauge its monetary-policy changes on the establishment survey labor metrics, the market could be headed lower. After all, these numbers are painting a much rosier picture of employment dynamics.

But if they follow the household numbers more closely and recognize the structural labor deficiency, we could edge closer to the end of the rate-hike cycle. And the sooner the Fed stops raising interest rates, the quicker institutional and retail investors alike can become more constructive on risk assets like stocks.