The Inflation Pivot of 2023 Signals a Market Rally

Last year the term "Fed pivot" – referring to the point at which the Federal Reserve would indicate a slowing and/or stopping of interest rate increases – flooded the airways, tv chyrons, and internet articles.

Now there is no denying that even us here at Stansberry Research utilized this term a lot over the last 12 months and recognize the importance of Fed policy and its interest rate policy outlook.

Remember that it was only June of last year when headline inflation peaked with the Consumer Price Index ("CPI"), showing an annual growth rate of 9.1%. Since that time, the CPI has descended to its current level of 7.1% annual growth for November.

And in December, the Fed enacted its first pivot, slowing its pace of rate hikes to 50 basis points, following four straight hikes of 75 basis points.

These events dominated headlines in 2022, and for good measure. But moving into the new year, we must reorganize our thoughts and look even deeper at how inflation and the overall economic environment may affect investors.

And when we put inflation figures under an even stronger microscope, we can see that there are two very different types of peak inflation.

The Federal Reserve Banks of Atlanta and Cleveland characterize these distinctions within the Bureau of Labor Statistics' CPI reading as flexible and sticky CPI. With sticky CPI outweighing flexible CPI 3:1 in the total headline CPI reading.

These two sets of prices – sticky and flexible – can provide insight into the different aspects of inflation. Sticky prices tend to incorporate long-term expectations about inflation to a greater degree and are slower to react to pricing pressures. Whereas flexible prices respond more quickly to current economic conditions.

For example, flexible CPI items include items such as gasoline, fresh food, used and new vehicles, and clothing.

The average time flexible CPI items take to reprice is about 2.6 months.

On the other hand, sticky CPI items include items such as shelter or owners' equivalent rent ("OER"), medical care services, education, recreation, and household furnishings.

The average time sticky CPI items take to reprice is about 10.7 months.

This leads us to what I (Kevin Sanford) characterize as the inflation pivot – or the point at which sticky inflation has peaked.

Take a look at the following chart that shows the historical path of both flexible and sticky CPI... 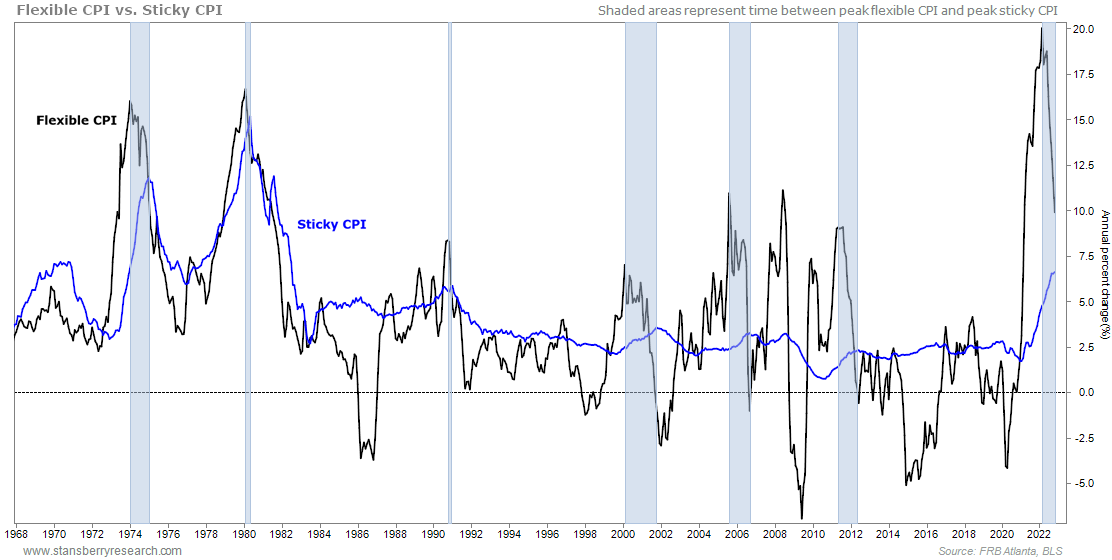 You will notice that flexible CPI has greater fluctuations (as expected), but also peaks faster than sticky CPI.

In fact, flexible CPI tends to peak even before the headline CPI reading does.

Take a look at the following chart that shows inflation broken down since June 2020. Flexible CPI peaked in March, and three months later headline CPI peaked in June. And as of the latest CPI reading in November, sticky CPI was still rising... 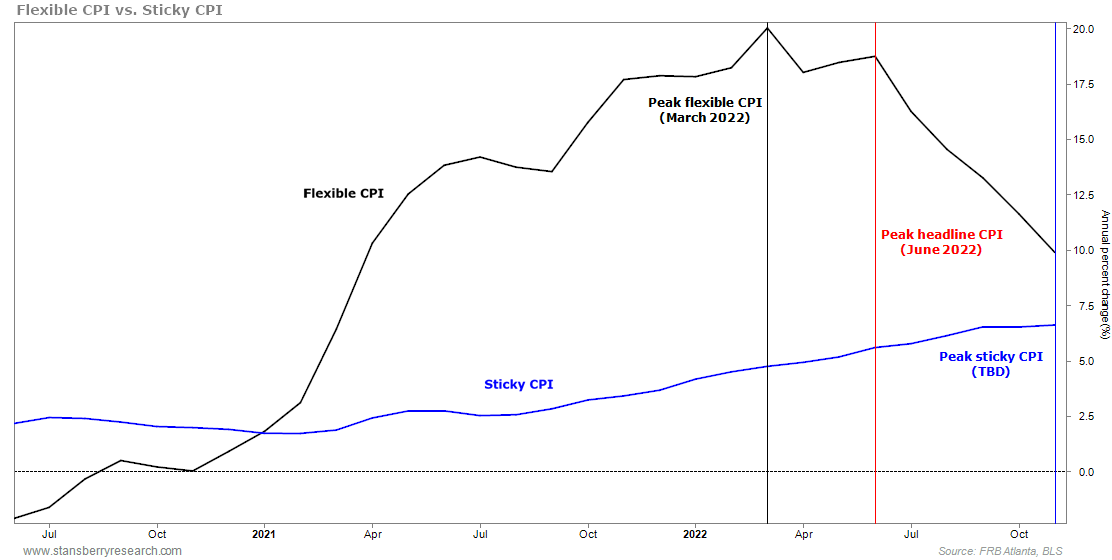 Over the last week, we highlighted our favorite articles from the past year and what we believed to be the most pertinent for investors heading into 2023. A few of these pieces highlighted important economic triggers and how they affected stock market returns for the months and years ahead.

Those economic trigger points – such as the Fed's pivot to slower rate hikes – have already been incurred. But the opportunity to capture value as an investor is not lost.

As of the current moment in time, we appear to be at or close to the peak in sticky CPI, while already passing the peak for flexible and headline CPI. 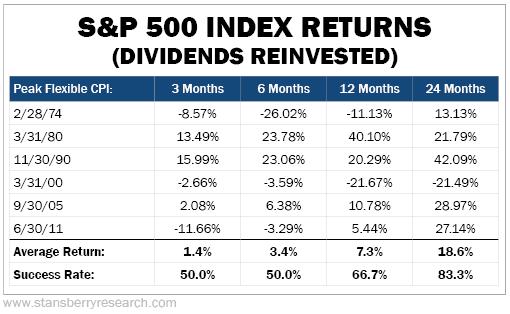 This shows us that within the first three and six months following peak flexible inflation, there is only a one in two chance of having positive returns. For comparison, the three-month return following this year's peak in March was -10.87%. The first six months saw a return of -11.62%.

Now look at the S&P 500 returns following a peak in sticky CPI... 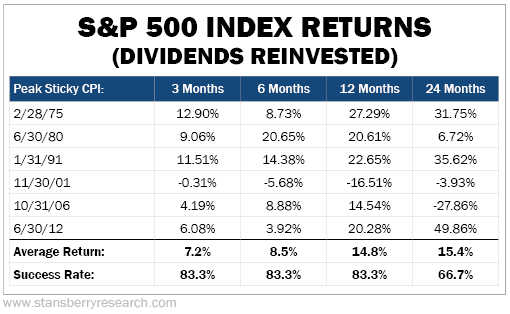 The difference in market performance from these two starting points is most notable within the first year of each. Within the first three months following peak sticky CPI, returns are nearly equivalent to the long-term average annual returns of the market. Meanwhile, the 12-month return, doubles that figure.

The bottom line is that investors still have more than enough time to capture value through investments this year. Now we are not saying that this year won't have volatility, because it will. But the point is, opportunities are ripe for the taking this year following a tumultuous 2022 for investors.

As we begin this new year, I want to share a sports analogy that I often use to help navigate investors through times of extreme lows.

Look to the back of the baseball card.

Meaning, even the greatest of athletes can have a down year, but they always bounce back to their career average performance in time. And so does the market.

If you'd like to read more about specific investment strategies for 2023, check out Stansberry's Investment Advisory here.