Wait… Someone Wants to Ban EVs?

The Roaring 2020s is all about the convergence of technologies.

I'm talking about technologies like artificial intelligence, the blockchain, genomics, the Internet of Things, electric vehicles ("EVs"), and renewable-energy sources. These innovations will make this the greatest decade in the history of the stock market.

We're already seeing some of these next-generation megatrends take shape. And leadership in these spaces is often centered in California, New York, and Washington, D.C.

But how often do the headlines come out of middle America?

One Mountain State is making waves in the EV space, which tells us something important about the future of the industry – and the investment potential within it.

But before we get to that, let's discuss an area of the market that struggled last year but may be coming back with a vengeance...

Investors are rushing back into the bond market to kick off the year.

McCall's Call: There's no sugar-coating it... Last year was horrible for bond-market investors. But according to recent data, they're ready to dive back in...

Then there's the popular iShares 20+ Year U.S. Treasury Bond Fund (TLT), which fell about 33% last year. That marked its sharpest decline since it began trading in 2002.

In short, the year was ugly for bonds. But it appears as though that trend may be shifting...

Since the start of 2023, bond-market inflows have averaged about $2 billion per day. That's well above the five-year daily average of $618 million. And over the past 40 days, nearly $50 billion has come back into the sector – also a historical extreme.

And after such poor performance last year, I can understand why investors are rushing in. Bond yields are higher than they have been in years.

But it's still worth being a little cautious...

As you can see below, TLT has rallied up to its falling 200-day moving average (200-DMA). That's often an important resistance level for assets. 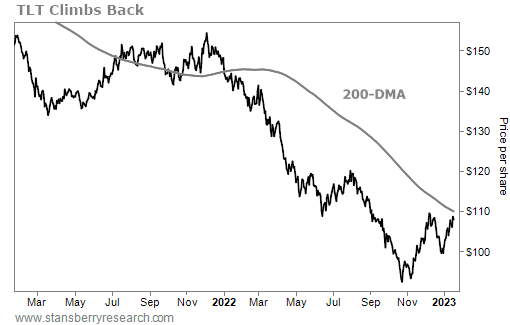 Bonds are attractive investments for safety and income. But the trend hasn't completely shifted just yet.

If TLT can hold above its 200-DMA and the moving average can itself turn higher, the odds of a longer-term rally increase. That's what I'd want to see before getting too aggressive. Because right now, the rally could still stall out, and the downtrend may resume.

So if you're interested in the bond market, keep an eye on this important level. It might mark an important turning point in this bond rally.

Wyoming state senators have proposed a ban on EV sales by 2035.

McCall's Call: Yes, you read that right. Instead of following California's lead – and the rest of the world's, for that matter – a group of Wyoming state senators have suggested phasing out EV sales over the next decade.

Confused? So was I.

The thing is... this isn't a serious proposal. One of the senators backing it even admitted as much. Senator Jim Anderson said that the proposed ban is a counter to California's internal-combustion engine ban (by 2035), which was soon followed by New York. He pointed out that Wyoming doesn't have the infrastructure in place to accommodate an EV-only world.

And now things are starting to make a little more sense.

There are two points I took out of this proposed "ban"...

First, Wyoming isn't the only state that doesn't currently have the infrastructure necessary to support the coming EV boom. And that boom is inevitable... As we talked about on Wednesday, EV sales passed 10% of global auto sales for the first time ever in 2022. And they'll only continue to grow market share from here.

Billions of dollars will need to be spent to get this infrastructure in place.

We're already seeing some of that enter the market. For example, the Inflation Reduction Act will funnel $7.5 billion to states to build out EV-charging networks. That's a start... but much more will be needed in the coming years.

Just think about how many gas stations there are across the country. They're on interstates and in small towns. You can even find them in the middle of nowhere! EV-charging stations need to match the footprint of traditional refueling.

The second thing I took from Wyoming's "ban" is that the U.S. is still extremely reliant on traditional energy sources like crude oil and gas.

Renewable-energy sources made up just 20% of total power last year. It will take years – possibly even decades – for renewable energy to grow to meet the power demand currently provided by oil and gas.

So what does this tell us?

Wyoming made it clear that it's not ready for a world dominated by EVs. And it's not the only state...

That means that a lot of money still needs to flow into these "industries of the future." And as that happens, the companies at the forefront of this shift will see their share prices soar.

The best way to profit from the coming boom is simple...

Get yourself in position today.

P.S. Regular Daily Insight readers know that I'm bullish on clean energy. But as we just talked about, the oil and gas industry remains a viable investment option today – and it will be for some time.

So to capitalize on the long-term demand for traditional energy plus the inevitable growth of clean-energy sources, I recently unveiled a brand-new "barbell" investing strategy to my McCall Report subscribers. By focusing on both niches within the broader energy industry, we can be sure that we won't miss out on any of the big gains coming our way.

The Energy Barbell portfolio is already off to a solid start – but it's not too late to get in. Click here to learn about this strategy and the stocks that set us up the best for success.

Did You Miss My Latest Podcast?

The rally we've seen to jump-start 2023 has been fading the past few days. While I'm still bullish on stocks this year, the general consensus remains mixed. Many analysts expect a rough first half before stocks finally put in a long-term bottom. And our guest on the newest episode of Making Money With Matt McCall is in that camp.

Former hedge-fund manager and fellow podcaster Hugh Hendry believes the market has lower to go... and he backs up his claims with a discussion of the Federal Reserve. We agree that the central bank has made mistakes, but we disagree on how its next moves will affect the market. Then, Hugh shares his "island stock" pick... and it just so happens to be one that nobody has recommended yet.