We’re fortunate to live in a world of abundance.

I always find it incredible to reflect on how remarkably different things were 20 or 30 years ago. Some things were better back then, of course. But generally speaking, the advancements resulting from technology and biotechnology have been transformative to the world.

Poverty has declined significantly, and quality of life and human longevity have improved dramatically.

And these advancements were all possible due to the rapid and incessant pace of technological development in semiconductors and computing systems.

This year was a banner year in the world of supercomputing.

The first major breakthrough was the commissioning of Frontier – the world’s first exaflop supercomputer. It’s capable of doing over a quintillion (1,000,000,000,000,000,000) operations per second.

Then this fall, Tesla announced its artificial intelligence (AI) supercomputer, Dojo, which also performs at more than an exaflop.

And just days ago, AI-centric semiconductor company Cerebras announced that it had commissioned its own AI exaflop supercomputer for just $30 million.

Performance of the World’s Top Supercomputers 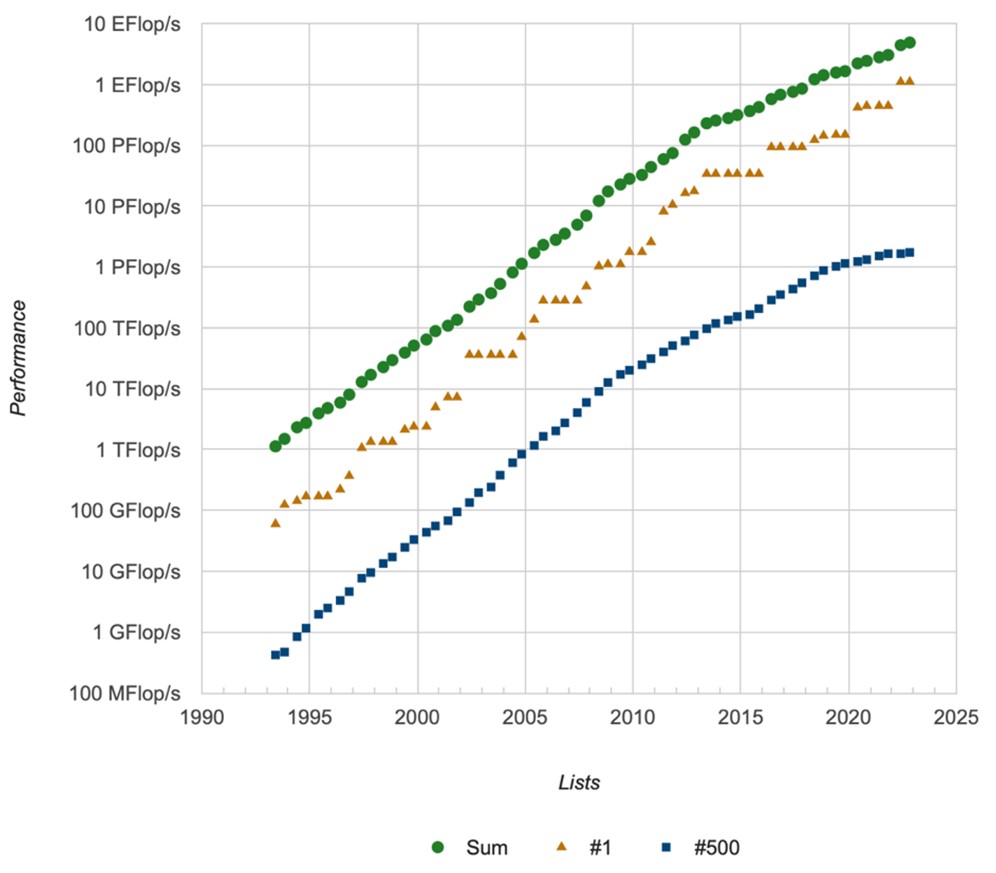 The chart above is extraordinary. It’s in log scale, with each vertical tick representing a 10-fold increase in computing power.

The next major performance level will come out next year at the Los Alamos National Laboratory, when Nvidia launches its 10 exaflop supercomputer Venado.

The exponential growth of computing power has resulted in an abundance of both computer processing and data. But the rapid growth created a problem. The International Systems of Units (SI) started running out of SI prefixes like “exa” (1018) to denote the ever-increasing magnitude of the numbers.

That’s why, at the 27th meeting of the General Conference on Weights and Measures, Resolution 3 extended the range of SI prefixes to account for even greater numbers in the future:

Technology is moving so fast right now, it won’t be long before we’re hearing words like “ronnabytes,” or “quettaflop supercomputers.”

The reality is that the developments of the remainder of this decade will make the last 30 years of technological advancements seem almost insignificant. Between technologies like genetic editing, AI, quantum computing, and nuclear fusion, what’s about to happen will surprise just about everyone.

These advancements will lead to limitless, cheap, and clean energy for the planet. They’ll result in remarkable advancements in human longevity, unbelievable improvements in quality of life, and more time to pursue the things that we’re most passionate about.

We have so much to look forward to. I’m wishing all of you a “quettastic” Thanksgiving and holiday season.

A J.P. Morgan Wallet on every smartphone?

JPMorgan’s CEO Jamie Dimon said bitcoin was a scam. And at one point, he even said he would fire any employees who touched it.

To be fair, those comments came a few years ago. But guess what?

It takes years to get patents through the USPTO review process. For the J.P. Morgan Wallet to be awarded a patent now, the patent must have been developed and filed years ago.

So it seems JPMorgan has been building up its digital asset infrastructure for quite some time – all in the background. Perhaps Dimon’s comments were meant to divert attention away from what he was really up to.

Recently, we had a look at JPMorgan’s decentralized finance (DeFi) pilot. That involved a system to facilitate cross-border transactions using digital assets and blockchain technology.

But this isn’t just about financial institutions. This patent can potentially impact every one of us. Here’s a snapshot of the filing:

The J.P. Morgan Wallet will enable what’s essentially a checking account for digital assets. That would put JPMorgan right in the thick of the industry. And it would enable all sorts of different digital asset-based financial services.

And get this: The patent details intend to provide payment processing services in multiple languages and currencies.

So this isn’t just about supporting a U.S. central bank digital currency (CBDC), as we discussed yesterday. Instead, JPMorgan’s wallet will enable digital asset transactions on an international scale.

This is a huge development, and there are clearly some major plans in play.

The tea leaves are reading that there are going to be some major developments related to digital assets, CBDCs, and the traditional financial services industry in the next couple of quarters.

Which autonomous driving service will you choose?

Motional and Lyft just announced plans to launch an autonomous ride-hailing service in Los Angeles, California. It will go live in the coming months.

These two partnered back in 2020 to pilot Lyft’s self-driving services on the Las Vegas strip. Aptiv provided the autonomous driving technology. And Hyundai provided the cars.

After two years of successful operations in Las Vegas, the partnership is going to set up its robotaxi services in Los Angeles. This is city number two.

And that means it’s about to get really interesting…

If we remember, Waymo just announced plans to launch an autonomous ride-hailing service in Los Angeles less than a month ago. That service will go live early next year as well.

So we’re going to see some competition in Los Angeles right off the bat. That’s a good thing.

Consumers will get to choose which robotaxi service they use.

And I think this is a precursor for things to come.

Once a city has approved one company to deploy an autonomous ride-hailing service, it’s only a matter of time before another company comes in. When it comes to a brand-new industry, it’s much easier to be the second one through the door.

That said, I suspect Motional and Lyft have a big leg up in this competition. Not necessarily because they provide a better service. I’ve taken a ride in a self-driving Waymo – it’s great.

The key is that consumers already have the Lyft app installed on their phones. Now, when they open the app, they’ll have the choice between hailing a regular ride or an autonomous car. It won’t be any different from how we use the Lyft app today.

Meanwhile, Waymo will have to convince consumers to download its app and set up a new account. That’s a barrier to entry and requires a few extra steps – and a lot of marketing to raise awareness for Waymo’s service. In that way, Lyft is very much an incumbent and can leverage its existing infrastructure.

So I’m very interested to see how things play out in Los Angeles. The competition there will set the stage for what happens in many other U.S. cities next year.

And keep in mind, Uber will be entering the fray soon too.

Like Lyft, Uber has a partnership in place with Motional. I expect we’ll find out which cities Uber is targeting first in the months to come.

We’ll wrap up today with a major development.

Circle, the company behind U.S. dollar stablecoin USDC, is integrating Apple Pay for existing merchants. This is effectively a bridge between the Web 2.0 world and Web 3.0.

As we’ve discussed before, Web 3.0 is the next generation of the internet and financial services. It’s the natural progression.

We saw companies like Netscape and Yahoo come into being with Web 1.0.

The FAANGs – Facebook, Amazon, Apple, Netflix, and Google – were some of the big winners with Web 2.0. We can throw Microsoft into that bucket as well.

Web 3.0 companies are entirely digital-first. And they’re built with blockchain technology from the ground up.

So this partnership is going to bridge Web 2.0 and Web 3.0. in three different ways…

First, this will enable Web 3.0 companies to instantly expand their market reach.

There are plenty of crypto-native companies out there that only accept digital assets as payment for their goods and services. Non-fungible token (NFT) exchanges are just one example.

Now consumers will be able to buy products from these companies using Apple Pay. They won’t need to get set up with digital wallets and purchase cryptocurrencies. It can all be done through Apple Pay. And Circle takes care of that complexity without the consumer needing to see it.

The partnership also enables consumers who have digital assets to buy goods and services from Web 2.0 companies that only accept dollars. Consumers won’t need to convert their assets into dollars first. They can let Apple Pay and Circle take care of the transaction and conversions.

And finally, this integration will allow Apple Pay users to buy USDC directly. In this way, Apple Pay will become an onramp into the digital asset space.

I love it. It appears Apple is taking a page out of Square’s (now Block’s) playbook here.

Square’s Cash App made it seamless and simple for consumers to buy bitcoin. The app looks and feels like a normal Web 2.0 platform, but it brought people into the Web 3.0 space. And it’s been an incredibly successful portion of Square’s (Block’s) business.

Implementing Web 3.0 technology in a way that doesn’t require normal consumers to change their behavior and learn something entirely new is critical to increasing adoption and utilization.