TradeSmith Daily
Thursday, January 19th, 2023 at 1:00 PM
Early in the new year, I like to revisit one of my all-time-favorite dividend-stock investing strategies. I’m talking about the Dogs of the Dow, a strategy that has proven over the years to be as effective as it is easy to follow.

The concept was popularized in the 1990s by Michael O’Higgins in his book “Beating the Dow,” which is a must-read for investors.

The Dogs of the Dow is a simple, two-step strategy:

This concept is effective because you’re starting with a list of proven, blue-chip stocks from the widely followed DJIA. These 30 stocks have been around for many years and are some of the biggest companies in the world. Plus, nearly all of them pay dividends, and the Dogs of the Dow pay you the highest dividend yields of all.

They’re called “Dogs” because the high dividend yields typically mean the stocks have performed poorly over the past year or so. (As the stock price drops but the dollar amount of the dividend stays the same, the dividend percentage rises.) These stocks tend to be out of favor among Wall Street analysts. But you’re supposed to buy low and sell high, right? In fact, the Dow Dogs strategy has three things working in its favor…

That’s not always the case. But when markets turn volatile and most stocks suffer declines, that’s when the Dow Dogs really shine. And the strategy has stood the test of time. Since 2000, the strategy has posted an average total return of 8.7% per year. 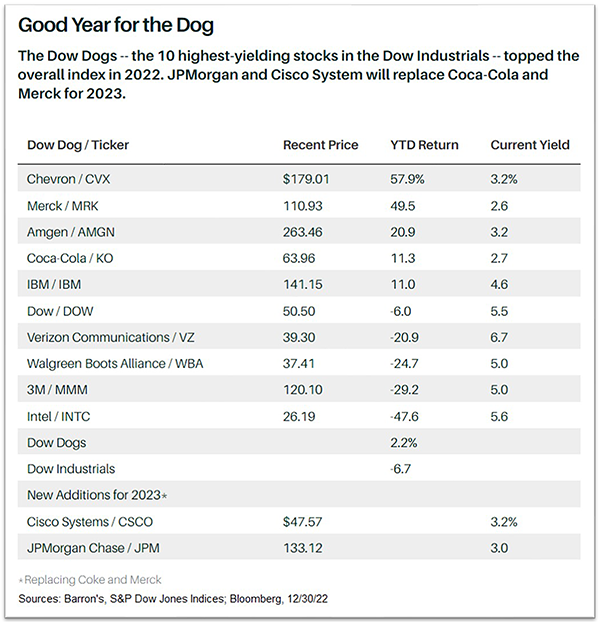 Eight of the 10 Dow Dogs for this year made the list last year as well. That’s often the case, and it’s a positive thing. With the stock market down in 2022 and these stocks helping to beat the overall market even then, they should continue to shine in 2023.


Recently, I shared this graph with TradeSmith Daily readers. 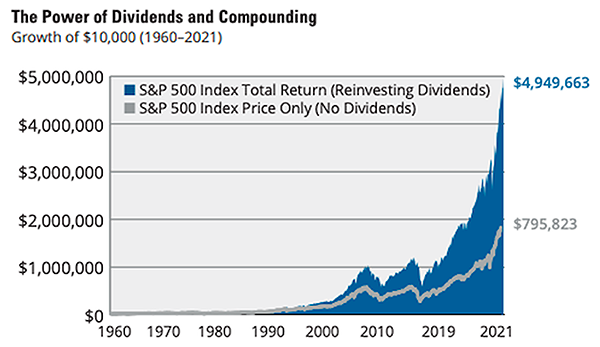 Source: Morningstar and Hartford Funds
It shows you the awesome compounding profit potential of buying dividend-paying stocks and then systematically reinvesting those dividends over time. The difference between dividend-paying and non-dividend-paying stocks is astounding. The total return of $10,000 invested in the S&P 500 with dividends reinvested grew to nearly $5 million from 1960 to 2021. That compares to gains of only $795,823 with NO dividends.

In volatile markets, it pays to own quality, blue-chip stocks that both pay you cash income up front in the form of dividends and have the potential for capital gains. That’s why I believe the Dogs of the Dow could pay off for stock investors as best in breed again this year.