Tesla Is Getting Schooled by BYD and Mercedes-Benz

TradeSmith Daily
Friday, January 13th, 2023 at 1:00 PM
Editor’s Note: This column first appeared in TradeSmith Decoder.
Given Tesla’s rough ride as of late, there aren’t as many die-hard bulls as there used to be.

For those steadfast in their TSLA bullishness, the following articles of faith apply:

Those beliefs — all of them false, in our view — are necessary to justify Tesla’s wild market valuation, which is still wilder than it looks because profit margins are unsustainable and revenue growth will slow.

For instance, Tesla’s trailing-12-month price-to-earnings multiple (35 as of this writing) almost seems reasonable for a high-flying growth stock… but the picture changes drastically if, say, the profit margin gets compressed by two-thirds (from 15% to 5%) as revenue growth flatlines.

A more realistic profit-margin yardstick is one of the (many) differences between Tesla and Berkshire Hathaway-backed BYD, Tesla’s No. 1 EV competitor in China.

Whereas BYD sports a nosebleed growth multiple comparable to Tesla’s, it does so with already-compressed profit margins in the vicinity of 3% — a level that is far more realistic and far more sustainable over the long haul, with respect to a fast-growing global automaker.

As a result of the valuation multiple keying off a 3% or so profit margin, BYD has a market cap of $75 billion as of this writing; compare that to Tesla’s still-nonsensical market cap of $347 billion, more than 4.5 times higher than BYD’s even after the recent plunge in Tesla shares.

And speaking of BYD, it is cleaning Tesla’s clock in China — and could soon be doing so elsewhere.

China is the top EV market in the world, in part because the Chinese government aggressively subsidizes EV sales. Last year more than 4 million EVs were sold in China — more than five times the number sold in the United States.

In the 2021 rankings for China EV sales, BYD came in tenth. But in 2022 BYD pole-vaulted to first, more than tripling its overall sales volume (which includes both pure electric vehicles and hybrids) to 1.86 million units.

Tesla, meanwhile, failed to hit its 50% growth target for 2022 — and worse still, had to cut prices to get units out the door.

Tesla shares have plummeted, in part, because the company was forced to lower EV prices in China twice in 10 weeks.

Tesla’s China-based Model 3 is now more than 40% cheaper than the same vehicle sold in the United States; last month Tesla started offering $7,500 discounts on Model 3 and Model Y vehicles in the U.S. too.

Meanwhile, over in China, Tesla’s double round of price-cutting led to throngs of protesters outside Tesla service centers, angry that they paid a higher price for a vehicle whose price was just lowered. Twice.

At the same time, BYD actually raised pricing on one of its popular models… and has plans to continue its rapid expansion beyond China’s borders.

Here is a snapshot of BYD’s China-based growth versus Tesla’s. Spot the difference in 2022… 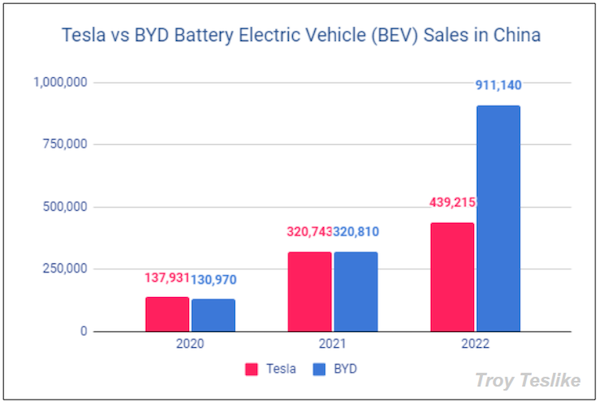 So who dominates the most important EV market in the world? Not Tesla.

Part of the problem is that Tesla’s model designs are old (they haven’t been updated in years) and competitors are turning heads. For example, check out this YouTube review of the BYD Seal — a new EV model that goes head-to-head with the tired Model 3.

Now ask yourself: How in the world will Tesla sustain profit margins in the teens when a competitor like BYD — who is running profit margins around 3% — is already eating its lunch in China?

The answer is, “it won’t.” Tesla has already resorted to the desperation playbook (slashing prices) to get units out the door. It will have to do so more and more aggressively as hungry and motivated competitors close in… and BYD is only one of them.

Getting trounced in China is bad enough — but the milestone Mercedes just achieved makes Tesla look even worse.

“Mercedes-Benz will be the first automaker to launch a Level 3 automated driving system in the United States,” added TheDrive on Jan. 6.

Assisted driving classifications progress from Level 0 to Level 5, where Level 5 represents true “self-driving” with respect to the car handling all decisions on its own 100% of the time.

Level 3 refers to “conditionally automated driving,” per the SAE (Society of Automotive Engineers), which means the driver can legally take their eyes off the road but needs to remain available if prompted by the system.

Mercedes-Benz’s Nevada certification is approved, and California is now pending.

The fact that Mercedes-Benz achieved Level 3 certification in the U.S. first, and not Tesla, tells us a couple things:

Even if Tesla succeeds in its mission to become a top-ranked global automaker, it is going to wind up being valued like a “normal” auto company. (The humanoid robots are a silly public relations stunt.)

And that, in turn, means living life in direct and brutal competition with players like BYD, who are willing to grind it out at profit margins of 3%.

Investors are absorbing this now, which is why institutional stockholders keep selling (as the current TSLA valuation is still in fantasyland relative to what happens next).

Tesla’s earnings report later this month is also likely to be horrible… and the downward adjustment is not yet halfway done. The shares still have a long, long way to fall.