Keith Kaplan, TradeSmith Daily
Friday, November 25th, 2022 at 1:00 PM
Investors who pass over ETFs are more interested in single-stock opportunities because, if those stocks are successful, they will provide larger returns than a diversified fund.

But one way to find single-stock investments in a certain industry of interest is by looking inside an ETF’s holdings.

And here at TradeSmith, we can make it even easier to find single-stock investments that are hiding in plain sight thanks to our Health Indicator.

Because not only do we show what’s inside an ETF, but we show you whether it’s in the Green Zone, Yellow Zone, or Red Zone, letting you know immediately if it’s considered a stock to buy, a stock to hold, or a stock to stay away from.

One area of increased investor interest is electric vehicles, so we’re going to start with how to find those investment opportunities to put on your radar.

The ETF itself is in the Red Zone, which means our Health Indicator says it’s currently not an investment to make.

However, if you look within the “Holdings” tab, that opens up a world of investable opportunities.

Sorting the holdings by our Health Indicator, you’ll see a full list of stocks in the Green Zone as of this writing that could be explored by those interested in investing in the EV and autonomous vehicle space.

Near the very end, you may see a familiar name: ON Semiconductor Corp. (ON).

In our Oct. 19 issue of TradeSmith Daily, the team shared how this company could be one of the best ways to invest in the EV market.

Here’s a quick recap from that issue:


“There’s a growing demand for semiconductors made from silicon carbide, as they can provide up to 50% faster charging and up to 10% longer driving ranges for electric vehicles.

“Customers are obviously going to be more eager to own a car with faster charging and longer driving ranges, and that demand could help silicon carbide chip revenue from electric vehicles reach $14.4 billion by 2030, up 1,066% from an estimated total of $1.2 billion in 2022.

“And as you may have guessed by now, ON is a beneficiary of that increased demand.

“On Aug. 11, onsemi cut the ribbon on its newest silicon carbide production facility in Hudson, New Hampshire, an important development to ensure that it can keep up with demand.

“In addition, onsemi expanded its operations in the Czech Republic, constructing a building that will allow it to increase production capacity by 16 times. It has invested $150 million into this building and will spend an additional $300 million through 2023.

“With silicon carbide chip revenue expected to be 12 times larger by 2030, those investments into expanding production should be money well spent for onsemi.”
You can also use this approach to find Green Zone stocks in any other ETF – like the Global X Genomics & Biotechnology ETF (GNOM).

GNOM seeks to provide results that correspond to the Solactive Genomics Index, an index that tracks the price movements of companies involved in the field of genomics.

In simple terms, genomics is the study of DNA, and companies are developing technology and medicine to help fight gene mutations that lead to disease.

Just like with the ETF DRIV, the ETF GNOM offers single-stock investment ideas that are in our Green Zone as of this writing. 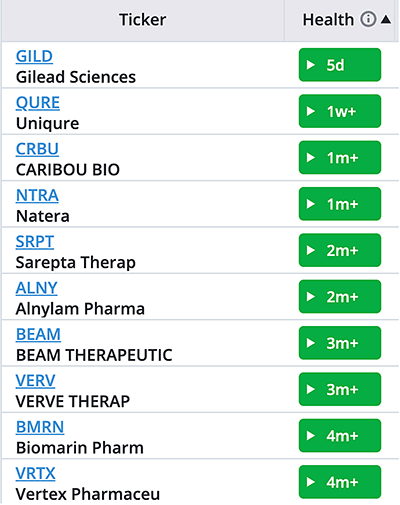 We recently covered one of those companies: Beam Therapeutics Inc. (BEAM).

Another quick recap of that issue:


“Beam has a portfolio of gene-editing technologies that include base editing, prime editing, nuclease editing, and RNA editing.

“One area of Beam’s business that’s worth focusing on is base editing.

“Beam believes that its work in base editing has three distinct advantages over existing gene editing approaches: 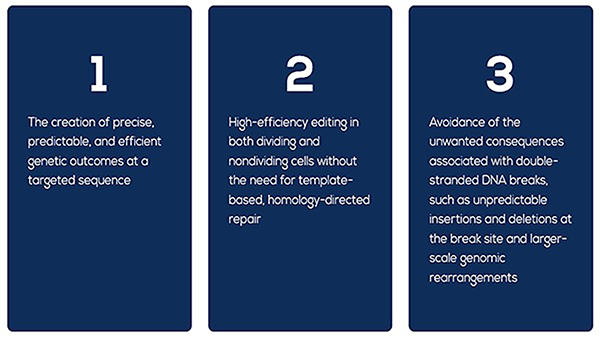 Source: BeamTX.com
“And that base editing has attracted the attention of a $261 billion pharmaceutical giant.

“Pfizer Inc. (PFE) signed a four-year deal with Beam for a research collaboration in base editing programs for rare genetic diseases of the liver, muscle, and central nervous system.

“Pfizer said in a January press release that it would make a $300 million payment to Beam as a part of the deal. Beam is also eligible to receive another $1.05 billion in milestone payments as well as royalties on global net sales.

“Beam also has a partnership with the recently public Prime Medicine Inc. (PRME), which will allow it to use Prime’s technology in certain areas, such as sickle cell disease.”

If there is an up-and-coming industry that you’re excited about, whether it be EVs or gene editing or the metaverse or the blockchain, there are corresponding ETFs.

Now, a word of caution: Always do a little bit of your own due diligence, as a company may only have very loose ties to the stated purpose of what the ETF is tracking.

But in general, using our Health Indicator to assess an ETF’s holdings is an advantageous little trick for finding single-stock opportunities that are hiding in plain sight.