Falling Inflation Is Good for More Than Just the U.S.

Even the head of the world's most powerful economic institution had to admit it...

Powell is the man in charge of reining in U.S. inflation. But by his own admission, it's a beast that even he doesn't fully understand.

Still, he acted in a big way this year to stop it. And his efforts seem to have worked so far.

Not only does this have big implications for U.S. investors... but it's just as crucial if you're thinking of putting money to work outside the U.S.

To tame raging inflation, Powell unleashed a rate-hike campaign like nothing we've seen in decades. He took the federal-funds rate from 0.25% in March to 4.25% in December... marking one of the fastest hikes on record.

The stock market didn't know if this strategy would work. Investors only knew that the world was changing. They ran for the exits... And stocks plummeted 22% from the end of March through mid-October.

Uncertainty drove prices lower. But now, we're seeing clear signs that the worst is behind us...

The rate of inflation fell more than expected in December to 6.5% – well below the 9.1% peak we saw this past summer. And inflation actually declined over the prior month, which hasn't happened since 2020.

In short, if Powell's plan was to prevent runaway inflation, he succeeded.

That worst-case scenario has likely come off the table. And with it, markets have gained more certainty for the first time in a while. In fact, the S&P 500 Index is now up more than 10% after bottoming in October.

But Powell's success isn't just good news for the U.S...

It also sends a message to the rest of the world – where the "inflation boogeyman" is still running rampant. You see, they now have an inflation-beating playbook, courtesy of the Fed.

No one else has hiked rates as aggressively as the U.S. so far. And most other markets are still in the thick of inflation as a result. Take the European market, for example...

The European Central Bank ("ECB") didn't start hiking rates at the same time as the Fed. The U.S. began its assault on inflation in March 2022... but four months passed before Europe followed suit. So today, while the federal-funds rate is at 4.25% to 4.5%, the ECB's rate sits at 2.5%.

Europe is behind the curve in fighting inflation... But we know more hikes are coming. Knowing that the Fed's efforts have dampened inflation stateside, investors can expect any additional rate hikes by the ECB to help get inflation under control in Europe.

Importantly, Europe is also starting to see signs of peak inflation for the first time...

The eurozone inflation rate fell to 9.2% in December. That might not look like much next to its reading of 10.6% in October. But the region has now seen two straight months of declines. Take a look... 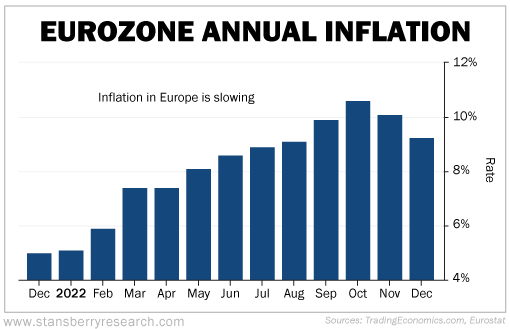 This is great news. The ECB will still have to send rates higher... but at least inflation is moving in the right direction.

Without the inflation-beating playbook of the U.S., it would be hard for the markets to know whether this decline is a fluke or the beginning of the end for eurozone inflation. But if we compare this data with what has happened in the U.S., peak inflation in Europe is close... or has potentially already passed.

In the U.S., inflation peaked at 9.1% in June... less than four months after the Fed started aggressively hiking interest rates. That's where Europe is in its rate-hike process right now.

So any further drop in inflation will reassure investors that the ECB's plan is working. And with less uncertainty, European stocks can go higher.

The Fed's aggressive interest-rate hikes are curing inflation domestically. And although the rest of the world is behind schedule, they now have a playbook to guide them.

That means 2023 won't just be a good year for U.S. markets... Stocks overseas will likely head higher as well.

Last year was one of the most volatile years since 1950. But according to Brett Eversole, that isn't bad news. In fact, he says this means a multiyear rally could be on the way. The years that follow extreme volatility tend to be good for investors. Learn more here.

"Last year, investors felt the unlikely pain of a down year for both stocks and bonds," C. Scott Garliss writes. Many folks fear the 60/40 portfolio is "dead"... But history proves otherwise. Don't throw this strategy away after one bad year. You must keep your eyes on the horizon. Read more here.