Treasury yields are headed even lower...

This morning, we discussed the outlook for interest rates. Specifically, we're focused on how much higher the Federal Reserve will raise the federal-funds target rate. After all, since the start of 2022, it has risen from a range of 0% to 0.25% to the current 4.25% to 4.50% range.

Take a look at the following chart.  The current rate-hike cycle has been the most aggressive since 1980. And based on the current guidance from the central bank (dotted line), there isn't much further to go from here. But the change resulted in 2022 being one of the worst years on record for bond-market returns... as well as the traditional 60/40 portfolio.

So, naturally, investors want to know if this will continue to be the case this year... or if the worst is behind us.

After all, money managers are always looking for the most opportune moment to invest. They want to capture the greatest upside return. Remember, the idea is to invest in what the economy will look like in eight to 12 months down the road and not what it looks like right now.

And based on what we're seeing in the bond markets and U.S. Treasury yields right now, it seems the aggressive rate-hike cycle is close to hitting its zenith... This means the upside potential for stocks and bonds is rapidly improving.

But don't just take my word for it. Let's look at some of the metrics...

The first thing we want to observe is the yield on 10-year U.S. Treasury. That rate is important for the economy because it's used as a benchmark for all types of lending. If it's headed lower, that means domestic borrowing costs are likely to do the same.

As you can see in the chart below, the yield peaked in October 2022 at 4.25%. That tells us that bond investors believe the Fed is winding down the rate-hike cycle. Timing the end is a difficult thing to do...  So rather than wait for the exact moment, money is being put to work now to lock in high yields. 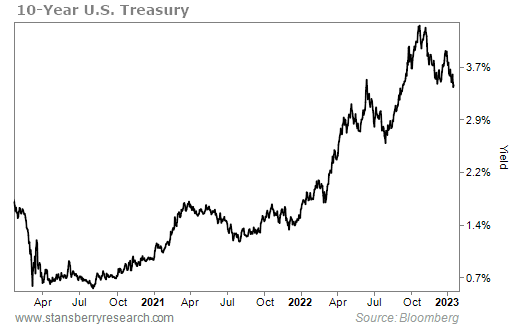 Next, let's look at what's going on with the 10-year U.S. Treasury yield compared to its 200-, 100-, and 50-day moving averages. These will give us an idea of the technical momentum. In other words, we can use these moving averages as points of support or resistance. If the current level is above one of those averages, it acts like a floor (support). But if the current level is below the average, it acts like a ceiling (resistance). 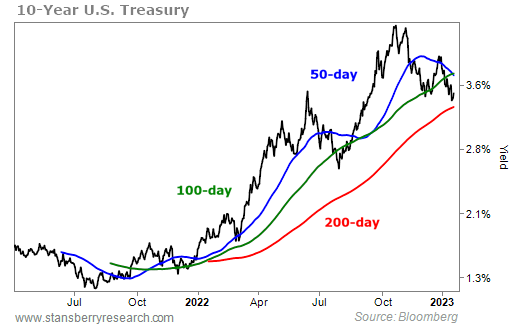 As we can see, the 10-year U.S. Treasury yield is breaking down through all of its support levels... By looking at the averages over time, we're getting a better idea of the trend rather than the price right now. This is another sign that investors think the current rate environment isn't going to improve.

Now let's look at the yield on 2-year U.S. Treasury. This is important because when both the economic and rate outlooks are more uncertain, individuals and businesses clamor for cash. As a result, short-term borrowing costs rise given the premium. But when that uncertainty begins to ease, those costs will do the same. 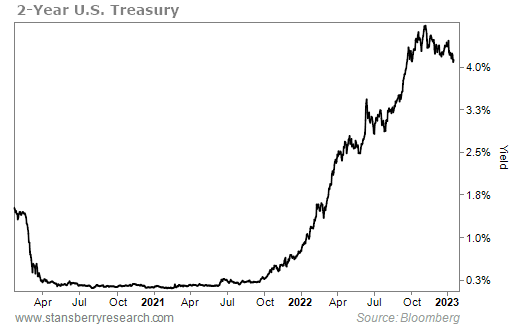 The 2-year U.S. Treasury yield peaked in early November 2022 at 4.72%. Ever since, it has been steadily easing and is now down to 4.18%. That's a signal the rate-hike outlook is becoming more certain.

Again, we can see the current yield is breaking down through its moving averages – just like the yield on 10-year U.S. Treasury is doing. The difference here, however, is that the 2-year U.S. Treasury yield peaked a little later because investors were more certain about the long-term outlook. Consequently, it's slower to break down. 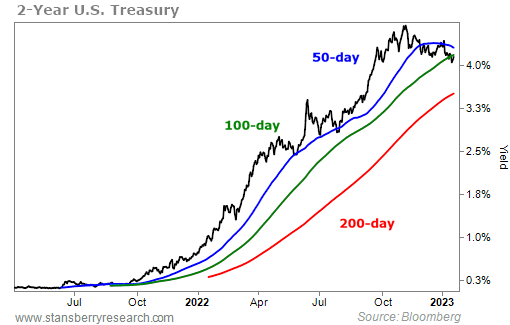 And then there's recent Fed commentary...

This past week, policymakers have signaled the rate-hike cycle is reaching its peak – just as we noted earlier. Vice Chair Lael Brainard said inflation growth is slowing, and it's appropriate to slow the pace of rate increases as a result. She also noted monetary policy is closer to a "sufficiently restrictive level."

The sentiment was echoed by Boston Fed President Susan Collins. She said a measured approach to rate hikes makes more sense, noting that it takes time for the economic fallout of these increases to be felt. But she said that once the federal-funds target rate creeps just over 5%, it would be appropriate to stop (it's currently at 4.5%).

Those two comments are Fedspeak for we're about to hit peak interest rates.

If big-money investors think interest rates are about to rise rapidly like we saw last year, then why be in a rush to put money to work? Because of the inverse relationship between bond prices and yields, rising rates will encourage the selling of low-yielding bonds in hopes of reinvesting in assets with higher returns down the road.

It's a similar story for stocks. If interest rates are going straight up, it'll costs more to take out a loan or refinance outstanding debt. That's a problem for corporate balance sheets and earnings. You see, when you have to pay lenders more because of higher interest rates, it eats away at your margins. That means companies are less inclined to borrow and spend.

Technology companies are typically associated with investing the most in future growth. That means the road to profitability for those companies is longer... which means the tech sector is often hurt the most by rising rates. Conversely, it will benefit the most when bond yields ease.

The writing is on the wall... The Fed is signaling we're approaching the finish line on rate hikes.

So, institutional and retail investors will clamor to lock in high fixed-income yields as soon as possible. That means the cost to borrow is headed lower as bond prices rally. The change will drive yields even lower, meaning borrowing costs will drop more. That should boost the earnings outlook for corporate America as it'll start to hang onto more of its money.

And as investors start to come to that realization, the cash they're sitting on will be itching to come off the sidelines. After all, it's earning nothing if it's not invested. Slowly but surely, investors will put their money to work, leading to a steady rally in the S&P 500 Index.