December marked the sixth consecutive month where the annual CPI number has remained below its June peak. It's also the lowest YOY reading since October 2021. 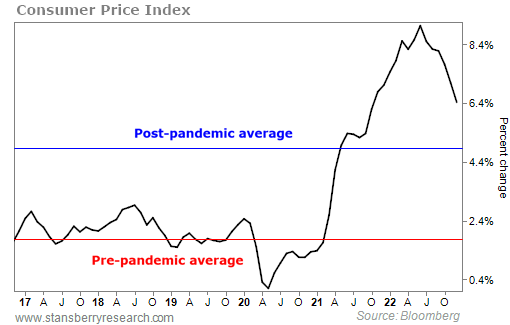 Even more, if we annualize the MOM number, inflation will contract by 1.2% over the next 12 months. But if we look at the three-month average of change, cost increases would annualize out to a 1.6% gain. Both of those numbers are well below the Federal Reserve's 2% target.

This should give the central bank room to stop raising interest rates going forward. But our inflation projection models imply it could hit the pause button on rate hikes sooner than later.

That would be a tailwind for stock and bond investors.

But don't take our word for it, look at what the data is showing us...

Well, let's take a look at the progress made with regard to the real fed-funds rate. This rate is derived from current interest rates minus the CPI's annualized growth. Note that the "real fed-funds rate" is a bit different from the "fed-funds rate." The latter is the rate set by the Federal Open Market Committee as a guide for overnight lending rates between U.S. banks. The real fed-funds rate takes it a step further by factoring in the damage done by rising costs.

In past rate-hike cycles, the Fed has sought to keep raising interest rates until the real fed-funds rate turns positive. That's the plan this time, too.

Take a look at the numbers this year compared with past rate-hike cycles... 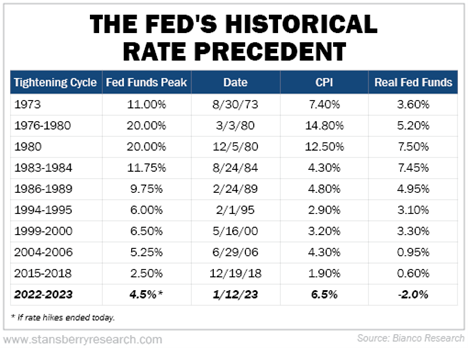 In other words, from the peak in March, when the central bank first started raising interest rates, to now, the real fed-funds rate has dropped by 6%. While it's still negative, that's a massive move.

The next question becomes, when can it return to positive territory?

We modeled different projections based on MOM inflation-growth trajectories. Prior to the pandemic, the average growth rate was 0.1%, while ever since it has been 0.4%. And since last June, the monthly rate has seen a 0.2% increase.

As a result, we think the most likely outcomes from a sustainable monthly growth rate are between 0.2% and 0.3%. Based on our updated models, we see a positive real fed-funds rate in March. 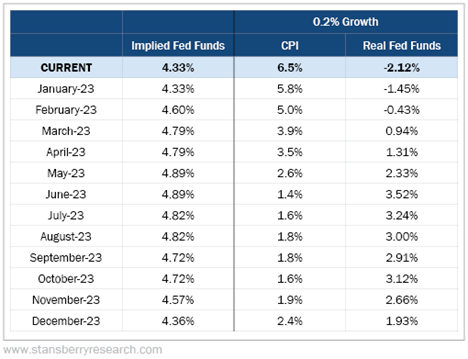 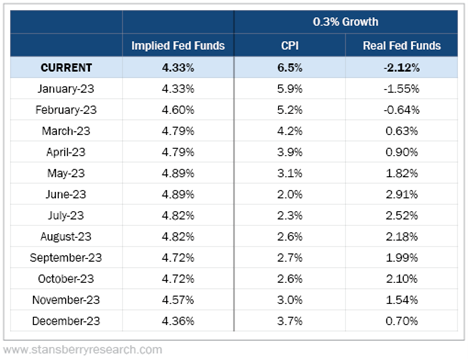 And more notably, December's inflation figure of 6.5% had major implications for even the most pessimistic view of inflation – 0.5% growth.

Take a look at the table showing 0.5% inflation growth... 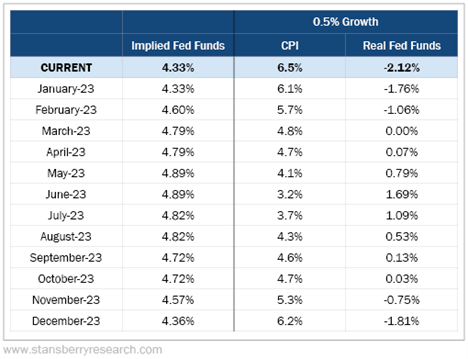 This is important as it relates to the mindset of retail and institutional investors. It tells them that the Fed is rapidly approaching its goal of a positive real fed-funds rate even in the worst-case scenario. And once that happens, it can pause rate hikes, and then even start lowering them eventually.

March is only two months away! And it's likely the central bank will have raised the federal-funds target range to at least 4.75% to 5% by then from the current 4.25% to 4.50%. That would only accelerate the real fed-funds rate's move into positive territory and have us right at the 5.1% interest rate target policymakers have endorsed.

So, investors seeking to cash in on peak interest rates will clamor to buy assets such as U.S. Treasurys and stocks that offer high yields. In other words, they'll start to put some money to work, while also looking to buy more aggressively once they sense rate hikes are done and the Fed hasn't crashed the economy.

We're always seeking to invest in what the economy will look like 10 to 12 months down the road. As high-quality assets that offer attractive income potential are snapped up, the end result will be an S&P 500 Index and bond prices that are higher at the end of the year.