The housing market was just provided a glimmer of hope...

Homebuilder sentiment rose in January for the first time since December 2021, offering the housing market a spark of optimism after being decimated over the last year by rising mortgage rates and a slowdown in economic growth.

The National Association of Home Builders ("NAHB")/Wells Fargo Housing Market Index ("HMI") rose four points to 35 this month. However, it's still far below the reading of 83 last January.

Based on monthly surveys of homebuilders, the HMI measures the current state of the single-family housing market. Any reading below 50 represents negative sentiment and a higher likelihood of a housing market downturn. The headline figure tracks current market conditions for the sale of new homes.

Sentiment fell every month in 2022, marking the longest stretch of declines since 1985. But 2023 is starting on a high note as homebuilders become more positive for the yearly outlook. 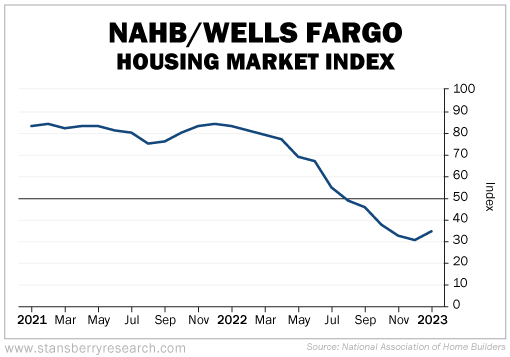 Furthermore, NAHB Chairman Jerry Konter said it appears that builders hit a bottom in December, meaning that permits and housing starts should both be on the rise soon after their recent lows. He added that the housing market could see a turnaround in the second half of this year.

Remember, housing accounts for nearly 40% of the Consumer Price Index.

Additionally, as we discussed earlier this month, housing plays a major role in sticky inflation. And the Federal Reserve is paying close to attention to this metric.

It appears that the housing market is close to expunging all the excess demand of the past two years. In return, sticky inflation should begin to fall. A rise in homebuilder confidence means that supply and demand are becoming more balanced and the outlook for the next 10 to 12 months is improving.

Slowing inflation attributable to the housing market, or "owners' equivalent rent," would signal to the Federal Reserve that its rate-tightening cycle should be nearing its end.

And while the Fed is likely on course to raise rates above 5.00%, any continued signs that the housing sector has hit its cycle bottom (or is close to it) would prompt the central bank to back down on additional aggressive rate hikes and even pause rate hikes altogether. This would, in turn, boost investor sentiment and the long-term outlook for the S&P 500 Index.