Today, the U.S. Bureau of Labor Statistics released its December Producer Price Index ("PPI") data. On a year-over-year ("YOY") basis, the number rose 6.2% compared with the expectation for a 6.8% increase and November's downwardly revised 7.3% gain. 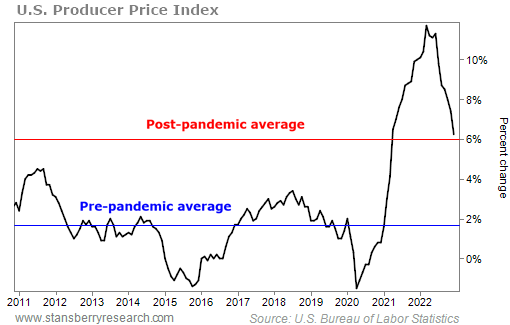 This marked the ninth straight month PPI data remained below the March peak of 11.7%. It was the lowest number for all of 2022, well below last year's average gain of 9%, and in line with the post-pandemic average of 6%. In fact, December saw the weakest rise in costs since the 4.1% jump in March 2021.

As we can see in the above chart, the pace of price gains is rapidly decreasing. It mirrors the steep ascent experienced during 2021, just to the downside. After all, the YOY comparisons keep growing more difficult. In other words, it's tough for manufacturing costs to show a 10% gain on top of the 10% number from last December.

While March may have signaled inflation growth, the YOY numbers didn't really start to let up until July when they fell back to 8.7%. But even then, it will still be high and difficult to show more growth on top of that type of number.

And it's a similar story with the month-over-month metrics...

Manufacturing costs shrank 0.5% in December compared with the expectation for a 0.1% slide and the prior month's 0.2% gain. So, if we annualize December's number, we'd be looking at costs contracting by 6% over the next 12 months. That's a massive change in momentum and far below the Federal Reserve's 2% inflation target.

Let's take it a step further. Let's look at the average rate of change in the PPI over the last three months to get a better idea of the trend. Based on those numbers, inflation grew less than 0.1% for the fourth quarter of 2022. If we forecast that number over the next year, we'd be looking at an annual rise of around 0.4%.

Lastly, we want to look at the core numbers...

This metric accounts for the change in inflation while excluding the more volatile categories of food and energy. Now, you and I know food and energy chew up a lot of our daily expenditures. After all, we can't get around without gas, and it's going to be hard to do anything if you don't eat. But the central bank believes the core numbers are a better sign of the underlying trend.

Core PPI rose 5.5% YOY versus the expectation for a 5.6% increase and the prior month's 6.2% gain. Much like the headline data, this was the ninth consecutive month the pace of growth has slowed since peaking in March. This was also the lowest number since May 2021... 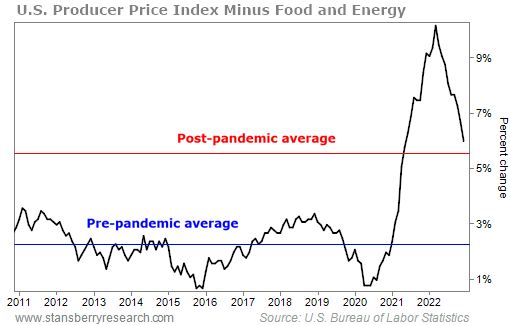 Like the chart of the headline PPI number, the core numbers are also decelerating rapidly. In a similar fashion, the YOY comparisons become more difficult when looking at the March peak of 9.7% growth. And they really remain difficult throughout the rest of the year, too.

So what does this mean for you and me?

Well, the numbers tell us companies don't have to keep raising prices massively to make money selling goods. After all, raw material costs appear to be stabilizing. That's good for us because it means companies can begin to pass some of those savings, or lack of price surges, on to their customers. So, consumers should see similar price stability as a result.

The change is positive from a Fed interest-rate-policy perspective. If inflation keeps slowing, the central bank doesn't need to be as aggressive with its rate hikes. In fact, the current numbers should signal that its policy actions are working. Considering there tends to be a six- to eight-month lag between rate hikes and the economic fallout, there's even more downside for prices ahead.

In other words, today's data support a shift in the Fed's interest-rate plans. The signs show growth is slowing. That's taking pressure off supply chains and manufacturers who were previously unable to keep up with demand. So, the central bank can stop raising rates and maybe even think about cutting them if we start to see more deceleration down the road.