Over the past few months, falling headline inflation numbers have confirmed expectations that peak inflation will be left in 2022. 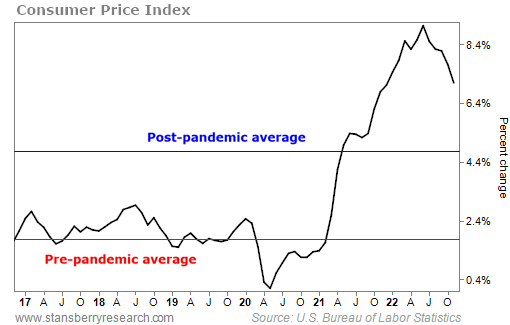 And if we annualize the monthly change out over the next 12 months, we'd be looking at YOY inflation of 1.2%.

This has consumers optimistic that the Federal Reserve will slow the pace of interest-rate hikes going forward. In the meantime, investors and money managers will be looking ahead to Thursday's release of the December CPI reading for any signs of a further decline in inflation.

A further deceleration in pricing pressures and improving consumer sentiment would put the Fed in a position to stop rate hikes sooner than expected.

This would boost investor confidence, allow money managers to get back into risk-based investments such as stocks, and serve as a tailwind for a sustained rally in the S&P 500 Index...

According to this week's release of the Survey of Consumer Expectations from the Federal Reserve Bank of New York, while expectations for inflation three years from now remained unchanged at 3%, short-term inflation expectations continued to fall in December.

This marks a decline of 1.8% in annual inflation growth since the metric peaked at 6.8% in June. And it's now the lowest reading since July 2021... 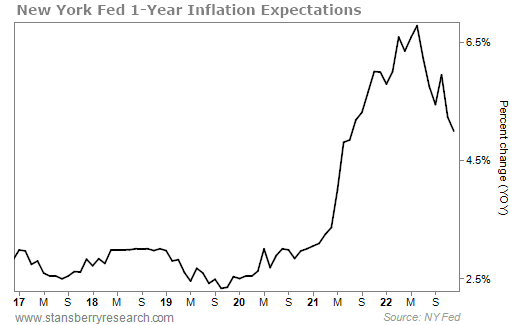 This is important because the New York Fed's survey results closely correspond with the direction of the CPI... 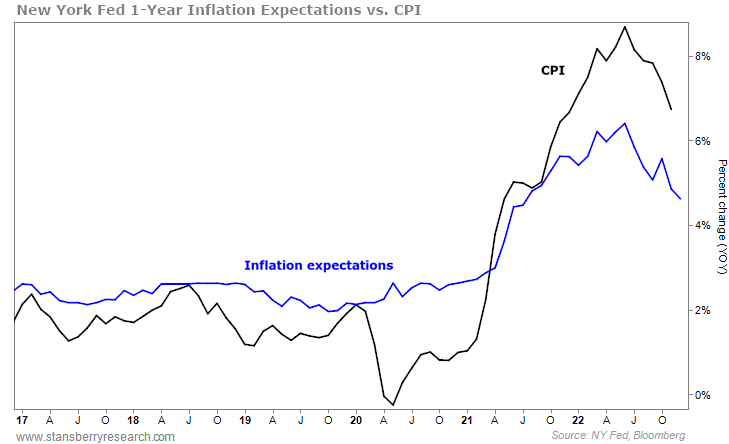 When looking at the factors that have driven inflation lower – and are therefore spurring consumer confidence – we can easily identify three key components.

The first is gas prices... 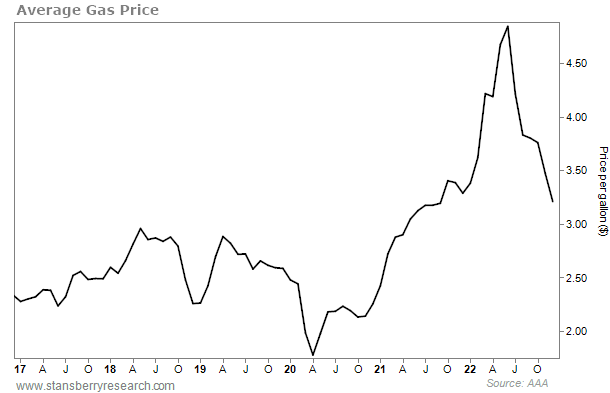 According to the American Automobile Association, the average daily price for a gallon of gas peaked at $4.84 in June. As of this past December, the average has fallen 33.7% to $3.21.

Even more importantly, gasoline prices have now turned deflationary. December's average cost for a gallon of gas is 2.43% lower than it was in December 2021.

The next factor driving inflation lower is used-car prices... 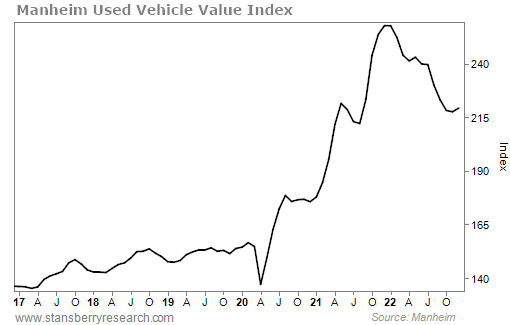 The used-car market is now also in a deflationary environment on an annual basis. In fact, according to Manheim, deflation started in September. And the latest figures for December show the index is down 17.5% YOY.

The final factor is the housing market... 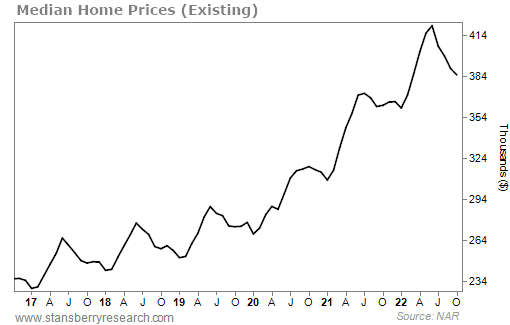 The National Association of Realtors ("NAR") reports that as of October, the median price of existing single-family homes fell 7.3% from its peak in May.

Now, the housing market isn't quite in a deflationary environment according to the NAR... As of October, prices are still up about 5.8% YOY. However, this marks the lowest annual growth rate since June 2020.

You can see the annual inflation rates for all three of these components in the chart below... 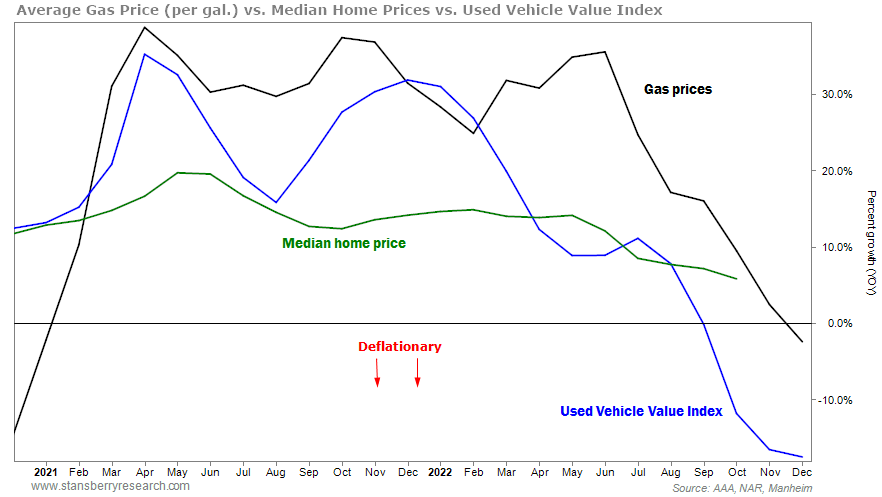 This has consumers more optimistic that overall inflation will quickly fall back to neutral levels (or roughly the Fed's 2% target). That's important from an economic-growth perspective, since households that are still wavering on economic conditions are likely to adjust their spending based on inflation growth. More importantly, the Fed weighs consumer inflation expectations heavily into its interest-rate decisions.

In fact, this shift aligns with recent guidance around central-bank policy. In December, the Fed slowed its pace of rate tightening, only hiking rates by 50 basis points as opposed to the previous four increases of 75 basis points.

With each passing month, yearly comparisons are becoming even harder to match. In other words, we should expect to see lower YOY figures moving forward even with prices remaining flat.

But as we've shown, it's becoming apparent that certain key components of inflation are either already in a deflationary environment or are projected to hit that mark later this year.

This would further accelerate the decline in headline inflation. Coupled with more positive consumer sentiment, the Fed could be in a position where it pauses rate hikes sooner than expected. Ultimately, a true pivot in Fed policy where expectations turn to rate cuts instead of rate hikes should jump-start an idling economy and foster a market rally.