China's about to unleash a flood of tourist spending...

For the past three years, the government in Beijing has taken a different path than the rest of the world with regard to coronavirus infections. It has employed a strict zero-COVID policy for its citizens. That means that it has quickly tried to clamp down on the spread of any new infections. So, whenever a local province or city saw new cases, the authorities would move in and restrict movement.

We've experienced these restrictions throughout the global supply chain. China is the largest manufacturing nation in the world. Prior to the pandemic, Wall Street viewed the nation as the world's growth engine because it produced so many of the goods consumed everywhere else. But when major cities shut down and factories had no workers, the availability of everything ground to a halt.

Just take a look at the following chart of the Federal Reserve Bank of New York's Global Supply Chain Pressure Index. It measures the intensity of disruptions. We can see that when COVID-19 vaccines didn't exist, accessing goods and raw materials was a problem. But as we've adapted and inoculations have become more widespread, the situation has improved... 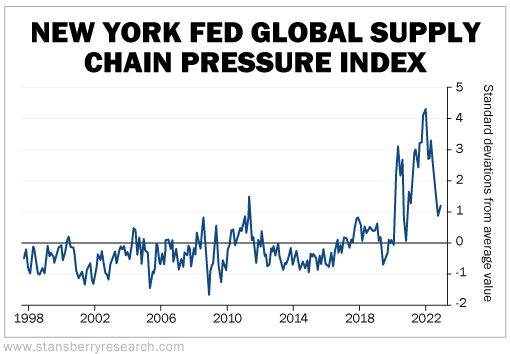 As a result of China's strict COVID-19 policies, it has kept its population more-or-less locked down for the past three years. But that's rapidly changing now...

Late last year, the government said it would remove those restrictions. This past weekend, it began to allow outsiders to cross its borders once more. And its citizens will now be allowed to travel abroad again.

So, after three years of hibernation, Chinese travelers will finally hit the skies and seas. And that should mean a wave of spending.

But don't just take my word for it. Look at what the data is telling us...

These travelers are going to book a lot of flights and hotel rooms. Hong Kong and Macau will receive many of those visits, and travelers will come home flush with luxury goods.

Prior to the onset of COVID-19, Chinese visitors made up the bulk of global tourism spending. According to the United Nations World Tourism Organization ("UNWTO"), travelers from China spent $277 billion overseas in 2018 and another $255 billion in 2019. Here's where they went... 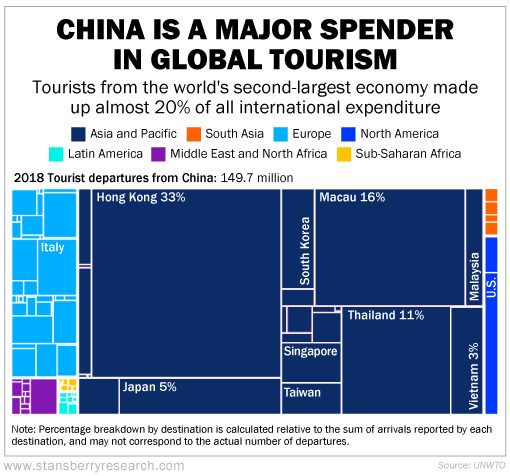 That made up roughly 20% of global tourism dollars. To put that in perspective, in those same two years, U.S. visitors spent about $176 billion and $185 billion abroad, or roughly 15%.

Yet, since the onset of pandemic restrictions, those spending numbers have plummeted. In 2020 and 2021, Chinese travelers dropped $131 billion and $106 billion in other countries. Meanwhile, their U.S. counterparts saw spending decrease to only $48 billion in foreign locales during 2020.

But as inoculations have become more widespread and barriers have been removed, the U.S. travel outlays number recovered to $73 billion in 2021. And according to the U.S. Travel Association, the number has improved even more in 2022. Spending is up 3% compared with 2019 levels through November.

So, as China's government removes COVID-19 barriers, it's only natural that travel abroad will resume. But how will the timeline play out?

Take a look at the following image. The chart, from data provider Worldometers, shows the U.S. COVID-19 infection waves... 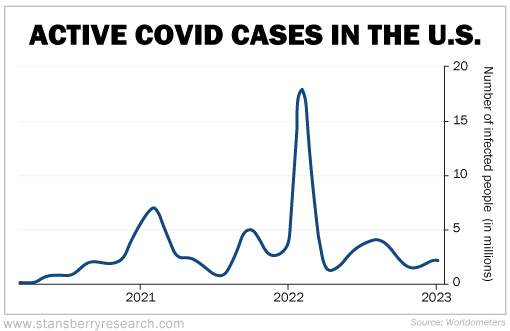 With Beijing removing restrictions, it's at the point we were in late 2021. Plenty of individuals have been infected but there hasn't been a widespread transmission until now. As we can see at the beginning of this chart, it took about two to three months for infections in the U.S. to peak and then subside. Then, as we moved forward, the cycles shortened in length.

As I mentioned before, China announced it was changing its policies in early December. That means we're a month out. In other words, it could be another couple of months before the population sees the current infection wave peak and then start to subside.

That's important for two reasons... Recovering individuals will feel more confident about traveling abroad and foreign countries will be more willing to accept those travelers.

And they've got money to spend...

According to Beijing-based think tank China Finance 40 Forum, households have boosted savings in 2022 by about $1.8 trillion through November. That's on top of a roughly $1 trillion average in 2020 and 2021. That brings the total since the pandemic started to around $4 trillion. That can buy a lot of tickets to anyone's version of paradise.

But while they're abroad, Chinese visitors like to buy high-end goods. They view foreign goods as higher quality and find they're cheaper to purchase overseas. According to the Financial Times, Chinese travelers accounted for almost 20% of all global luxury sales in 2019.

Based on numbers from consultant firm Bain & Company, there's little evidence that appetite has changed. The group said Chinese consumers spent $73.6 billion on luxury goods at home in 2021. That was more than double the amount spent in 2019. By 2025, Bain expects China to become the largest luxury goods market.

As we noted above, U.S. tourism outlays are already back to 3% above where they were pre-pandemic. If China's numbers do the same, it should portend a $157 billion surge compared with 2021's $103 billion. Considering UNWTO is forecasting $1.3 trillion in tourism spending this year, that's a lot of extra flights, hotel reservations, and designer handbags to be purchased.

So, if the situation in China plays out as it has in the U.S., we're a couple of months out from a pending boom in travel demand.