The Federal Reserve's interest-rate hikes are killing the economy...

Manufacturing activity is getting crushed. That's an important barometer to watch because it's considered a leading indicator of overall economic growth.

If manufacturers are seeing tons of demand for their goods, it signals strong economic growth. As more orders roll in the door, companies hire more workers to increase output and meet that demand. In theory, there will also be more people with money in their pockets, spending it on all types of goods and services throughout the economy. In turn, that change feeds into increased demand as more folks dine out and travel.

However, if manufacturers are seeing the number of new orders decline, that signals economic growth is slowing. With fewer orders, companies have fewer jobs for workers to do. And if the situation persists long enough, businesses start firing people to cut costs. That will continue until those entities find a level where they have enough workers to continue operating and be profitable.

And recent figures from the Institute for Supply Management ("ISM") show us new orders are in freefall... 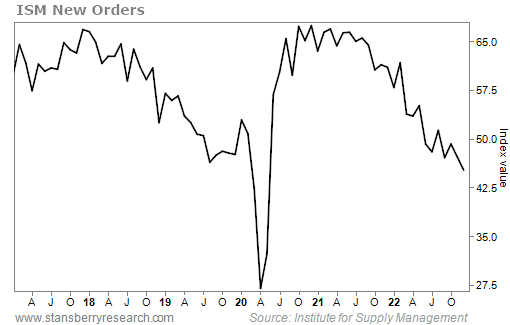 The chart above shows us that the last time there was a significant increase in manufacturing orders was in February of last year. That was right before the central bank started raising interest rates from a range of 0% to 0.25% to the current range of 4.25% to 4.5%. And economic demand has been falling off a cliff ever since.

Yet central bank members are dead set on raising rates even further... They keep saying they have to kill the economy to bring down inflation. In fact, Minneapolis Fed President Neel Kashkari recently said he'd like to see interest rates rise to 5.4% before stopping. And Kansas City Fed President Esther George said they need to remain above 5% for some time.

If these rate hikes don't stop soon, you and I will be the ones who really suffer. But don't take my word for it – look at what economic data is telling us...

On Wednesday, the ISM released its manufacturing Purchasing Managers' Index ("PMI") for December. Not only did the numbers show business activity contracted more than expected, but the index also experienced its second consecutive monthly downturn and fell to the lowest level since May 2020.

That last part is significant, as May 2020 was when the U.S. economy was just starting to emerge from COVID-19-related shutdowns. Activity had been at a standstill, so businesses were barely operating. It was one of the worst quarterly contractions for the U.S. Bureau of Economic Analysis' ("BEA") gross domestic product ("GDP") on record. In other words, the current state of business hasn't been this bad since the pandemic brought the economy to a standstill.

Every month, ISM mails out questionnaires to purchasing and supply managers at businesses across the country. It then weighs the responses based on industry and their relevant contribution to gross domestic product ("GDP").

Respondents are asked a series of questions about how business activities this month compare with the month prior. These questions cover new orders, the backlog of orders, new export orders, imports, production, supplier deliveries, inventories, customers' inventories, employment, and prices. The index total is based on whether conditions are better, worse, or the same.

One of the key components we want to pay attention to is the prices paid by manufacturers for raw materials. That gives us a better idea of what it's costing companies to produce goods. If that number is falling, it typically means demand is doing the same.

And as we can see in the chart below, the prices paid index also hit its lowest level since the COVID-19 pandemic... 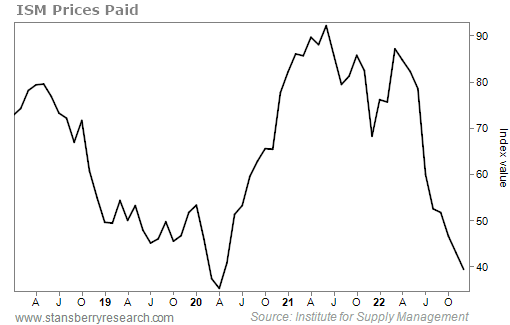 We want to also compare the ISM's prices paid index to the U.S. Bureau of Labor Statistics' Producer Price Index ("PPI"). After all, both measure the same thing. So, when prices paid for raw materials are falling, the PPI should be doing the same... 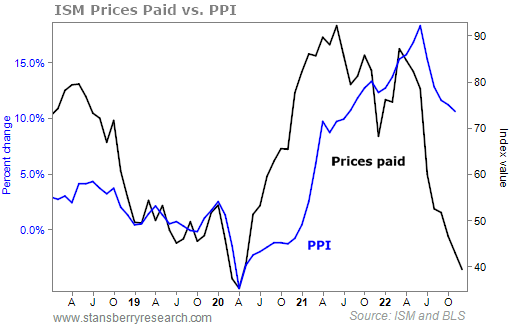 As we can see above, the prices paid index tends to lead the PPI. We can see that it peaked well before the BLS data and dropped sooner. So, based on what's happening today, we should see even slower inflation growth when the next round of manufacturing cost figures is released on January 18.

We also can't forget that a lower cost to manufacture goods means companies can pass on those cost savings – bringing down consumer inflation. So, that makes the survey's results important from an interest-rate-policy perspective...

As we initially noted, central bank policymakers have said they want to cool GDP growth to bring down rising prices. In fact, Chairman Jerome Powell has said he wants to see it run "below trend" for some time. That's Fed speak for at least a year or 18 months. Over the 10 years prior to the pandemic, economic output grew by an average of 2.3%.

Now, let's go back and look at the new orders relative to GDP... 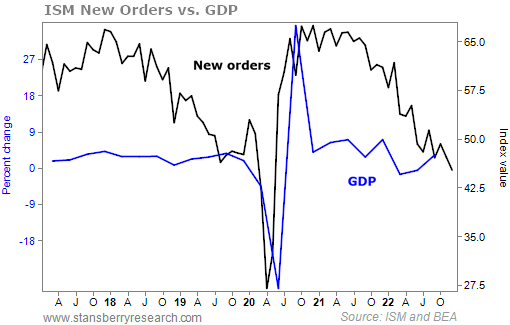 As we can see, new orders tend to lead GDP. They fell off a cliff, ahead of economic output, around the COVID-19 downturn and rebounded sooner. Again, manufacturing activity is typically the growth engine for the broader economy, as its ebbs and flows tend to support services-related businesses.

Right now, the GDP for 2022 is on track for no growth compared with the year prior. But, if the Fed doesn't back down on its rate-hike plans soon, the outlook for 2023 could worsen in a hurry.