Since early last year, when the Federal Reserve began its fight against inflation, the central bank has targeted the supply and demand dynamics in two key markets: housing and labor.

Housing is a major component of consumer inflation. By driving up the cost of a home loan, the central bank is expecting demand to fall, supply to rise, and prices to drop... which would bring down overall inflation growth.

That scenario is starting to play out... According to S&P CoreLogic Case-Shiller data, home prices have contracted for four straight months. And as we keep going up against more difficult growth comparisons heading into the spring, due to the high costs of houses just a year ago, prices are likely to show further declines.

The central bank has a similar outlook for the job market...

Labor costs are an important component of inflation for businesses. When there are fewer workers available, companies have to raise salaries to attract new employees. Then they will try and offset those costs by raising prices for their goods, which hurts the consumer. By increasing the pool of available workers, the Fed is looking for wages to drop and business costs to come down.

Yesterday, we received a sign that supply and demand in the labor market are coming back into balance. And as you'll see, this could be a major tailwind for the S&P 500 Index...

The U.S. Bureau of Labor Statistics released its Job Openings and Labor Turnover Survey for November. The data showed companies are seeking to fill roughly 10.4 million positions – more than the expected 10 million positions. At the same time, October's figures were revised higher from 10.3 million to 10.5 million.

November's data is well below March's peak of roughly 11.9 million job openings. This shows that available employment opportunities are shrinking. That's a trend we want to see. However, they’re not falling as fast as we’d like... 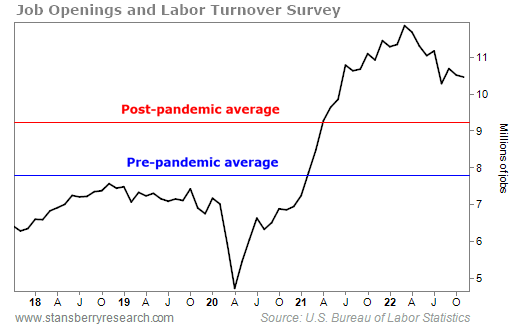 The Job Openings and Labor Turnover Survey tells us the number of hires, quits, and job openings each month. To generate this survey, the Bureau of Labor Statistics collects data from 20,700 nonfarm and government businesses and estimates changes on a national basis. So it helps the Federal Reserve and money managers gauge the job market's relative tightness. In other words, they can see how easy or difficult it is for an individual to find work.

We can also see this by comparing the survey's metrics with the number of people out of work and looking for new jobs. The November number showed a total of roughly 6 million unemployed individuals, slightly lower than the October number of about 6.1 million. In other words, with 10.4 million job openings, there are roughly 1.7 available jobs for every unemployed person... 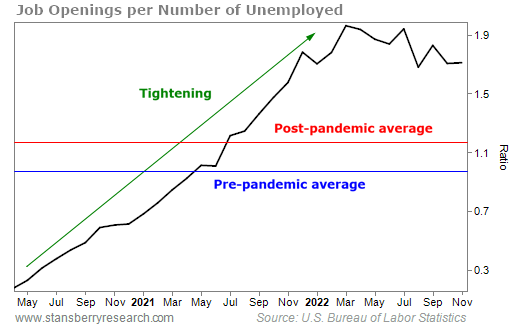 Fed Chairman Jerome Powell has said that he wants to see the ratio between the number of job openings and the total number of unemployed folks move lower. Prior to the COVID-19 pandemic, the ratio averaged around 1.0. The current average is around 1.2.

Even though the current ratio of 1.7 has mostly remained flat over the past month, it's far better than the 2.0 available jobs per unemployed individual we saw in March of last year. And remember, the November tally is despite a drop in the number of individuals seeking employment, which would typically signal an increase.

While it may not be the destruction of employment opportunities that the central bank seeks, there's a silver lining to these results... The numbers are backward-looking, which means it's unlikely they're representative of the current labor market.

So, let's consider the results from a monetary-policy perspective...

Yesterday's numbers may have been a bit higher than Wall Street had hoped, but the trend is still headed in the right direction. Again, we'll want to see this ratio continue to move lower. In fact, a sharp drop would be ideal.

Either way, a slide in the number of available jobs will be a sign the labor market is cooling once more. That would give the Fed more room to slow its pace of rate hikes... or even pause them altogether.

When signs of price stability emerge, money managers start putting funds back to work in the markets. This typically occurs at the end of the rate-hike cycle, when the Fed feels like it has inflation back under control. So, when the central bank stops raising interest rates, we'll likely see investors jumping back into risk assets like stocks.