We just received another signal that European inflation is easing...

This morning, the French National Institute of Statistics and Economic Studies (“INSEE”) released its preliminary Consumer Price Index (“CPI”) figures for December. The data showed prices rose 5.9% on a year-over-year basis compared to the consensus expectation for a 6.4% gain and November’s 6.2% increase. 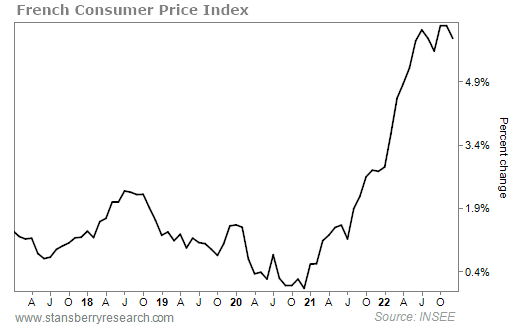 Granted, the number is coming off of the highest level in almost 40 years. But it’s a step in the right direction.

The month-over-month change proved even better. Prices contracted 0.1% from November to December compared to the estimate of a 0.5% increase and the prior month’s 0.3% rise. That puts the 3-month average at a 0.1% gain. If we were to annualize that type of growth, inflation would be on pace to rise by 3.6% annually. That’s far better than the 5.2% average for all of 2022.

But this is a story we’re seeing elsewhere in Europe...

The largest driver of the slide in cost growth was energy prices. They were up 15.1% compared to the 18.4% surge higher in November and the recent peak gain of 33.1% in June. At the same time, services costs were up 2.9% versus the July peak of 3.9%.

In the last week, we’ve seen similar numbers from both Germany and Spain. Yesterday, Germany's preliminary December CPI growth of 8.6% compared to the 9% expectation and the prior month’s 10% jump. On December 30, Spain said costs were up 5.8% compared to the 6.1% estimate and November’s 6.8% increase. Falling energy prices were also the driver in those instances.

We care about French economic data because it’s the second-largest economy in the eurozone at roughly 20% of economic output. In other words, what happens there is going to influence broader European results. The largest eurozone economy is Germany at 30% of gross domestic product while Spain is fourth at around 10%. 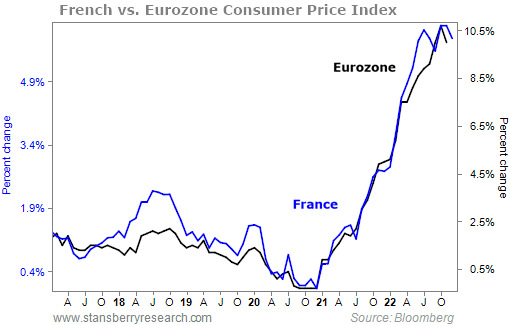 As we can see, the two data sets are tightly correlated. In other words, they move very closely with one another. However, the French INSEE numbers are released prior to those from the statistical office of the European Union. Those numbers aren’t due until Friday.

So, by considering the French, German, and Spanish figures together, we get a better idea of what the region’s cost growth looks like. And the data tell us inflation should fall below the 9.5% estimate, marking the second consecutive monthly drop.

Now, while this trend is still in its infancy, it’s what we want to see. After all, inflation costs around the globe have hit levels this year not seen in decades. The change has forced central banks everywhere to raise interest rates to boost the buying power of their currencies and try to stabilize prices once more.

The European Central Bank has already raised the benchmark deposit facility by 250 basis points to 2% since mid-July. Policymakers appear adamant about raising rates even more, signaling 50 basis point increases may be appropriate at the upcoming meetings in February and March.

The next question is what comes after those meetings? Because, even if inflation growth continues to decelerate every month until the March meeting, not enough time will have passed for a discernible trend to have developed. But there will be enough data to get an idea if momentum is building for cost growth to keep dropping.

So, if we see energy costs continue a steady slide lower and inflation ease even more, it should give ECB policymakers room to back down on their calls for even more aggressive rate hikes. The change would signal prices are stabilizing. That will improve household confidence, easing fears about having to save all of their disposable income for fear of more price hikes. And as that happens, it will encourage those individuals to spend once more, boosting Europe’s economic outlook.