We're continuing our review of previous market commentary. This piece focuses on the outlook for when the Federal Reserve stops raising interest rates. It originally ran on December 15. Enjoy!

The Federal Reserve finally backed off its aggressive rate-hike plans...

A couple weeks ago, Chairman Jerome Powell said the central bank is raising the benchmark federal-funds target by 50 basis points from a range of 3.75% to 4% to a new one of 4.25% to 4.50%. In other words, every home, car, and credit-card loan just got more expensive.

In typical central-bank fashion, he reiterated its commitment to bringing down inflation to the sustained 2% target. As a result, Powell said the rate-setting Federal Open Market Committee ("FOMC") expects to keep raising interest rates next year.

So, the question now becomes one of the havoc the central bank is wreaking on the economy. After all, policymakers like Vice Chair Lael Brainard and Federal Bank of San Francisco President Mary Daly have said it takes at least six to eight months before monetary policy changes start to show up in the economic data.

If we follow that thinking, the economic fallout we're seeing currently is based on the 75 basis points of rate hikes made in March and May. The 350 basis points worth of additional increases has yet to even be felt.

But based on the last rate increase and slowing inflation growth, the moment the Fed stops raising rates could be right around the corner...

As we discussed in the December 14 post, the U.S. Bureau of Labor Statistics' Consumer Price Index ("CPI") showed inflation growth of 7.1% in November. That's way down from June's 9.1% increase but still has a long way to fall to 2%.

Yet, we want to consider CPI in terms of how it influences the real federal-funds rate. That measure takes into account the current federal-funds target minus inflation. Powell has told us that now, like in past Fed rate-hike cycles, the goal is a positive real fed-funds rate. That number now sits at negative 2.6% compared with negative 8% in March.

The next question becomes when can it return to positive territory?

We modeled different projections based upon month-over-month inflation growth trajectories. Prior to the pandemic, the average rate growth was 0.1%, while ever since it has been 0.4%. And since June of this year, the monthly rate has seen a 0.2% increase.

As a result, we think the most likely outcomes from a sustainable monthly growth rate are between 0.2% and 0.3%. Based upon our updated models, we see a positive real fed-funds rate in March of next year. 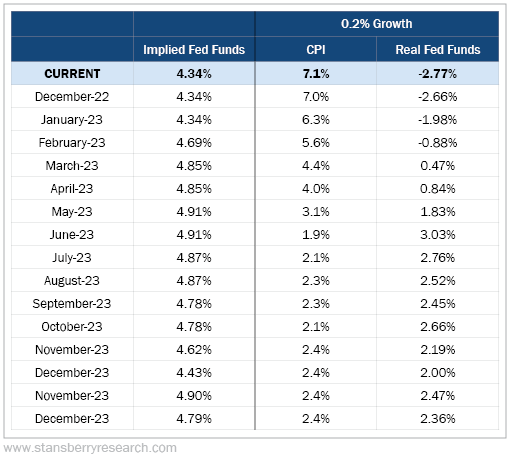 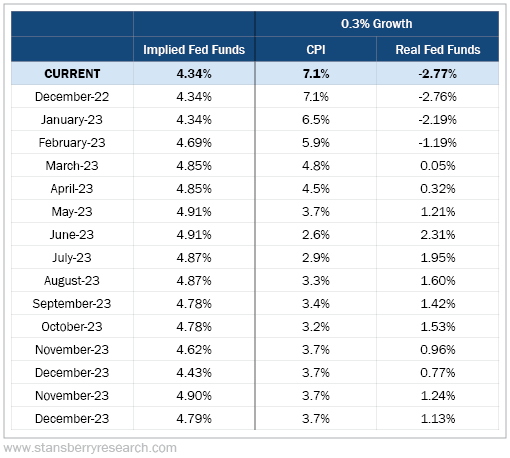 This second table is notable because of the projection change. When we previously ran this model at the start of December, it showed the real fed-funds rate wouldn't turn positive until May. While a two-month shift may not be significant in terms of normal time, in Wall Street time, it can mean everything.

That's because money managers who dissect their investment decisions on a minute-by-minute basis don't want to miss out on the moment the central bank changes course on rate hikes. It can mean a huge difference in their performance potential.

Here's what S&P 500 returns look like after past rate-hike cycles have ended... 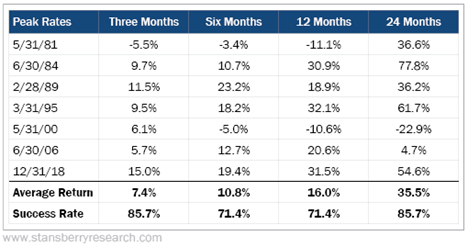 And here are the same numbers following the start of rate cuts... 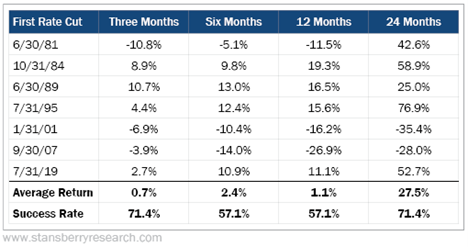 The last announcement was the start of a tidal shift by the Fed. It's not going to stop raising interest rates all of a sudden, but based on the metrics we're seeing, it could change pretty quickly. And rest assured that when it's ready to cut interest rates once more, you and I will be the last to know.

If the last rate increase comes as soon as March, it will be here before you know it. So, there's no time like the present to get ready. If you'd like to read more about how to protect your investment portfolio, check out what our colleagues at Altimetry have to say here.