We're continuing our review of past commentary today. This piece originally ran on December 19. Enjoy!

Equity investors are still fleeing the market in droves...

Earlier this year, on October 12, the S&P 500 Index closed down 24% on a total return basis (dividends invested). Now, we could still test the low of 3,577 before the year is out, but the chances of that happening are slim. December is more than halfway over, and there are less than 10 trading days left in the calendar year.

In addition, since hitting the recent low in mid-October, the S&P 500 has rallied 12.7%. One would expect the money flows into and out of equity funds to be overwhelmingly positive at the moment... But it's not!

Recent numbers from mutual-fund data provider Refinitiv Lipper show that mom-and-pop investors are pulling massive amounts of savings out of equity mutual funds. Multiple potential reasons for this come to mind... the first being inflation. But the fact that so much money is still being withdrawn at this point in the cycle is striking.

We could still see a stock market pullback in the first quarter of next year. After all, Wall Street strategists are calling for an earnings reset from corporate America.

But based on the amount of money currently being withdrawn from the market, such an event would set the S&P 500 up for a huge rally...

You see, according to Refinitiv, equity mutual funds have lost money for 26 consecutive weeks. That means investors have been exiting stocks since the middle of June, after the S&P 500 had dropped over 22%. And over that time frame, the funds withdrawn have totaled $254 billion.

In fact, we've seen money being pulled from equity markets for 39 out of the last 40 weeks. That has brought the total amount taken out to $333 billion.

Take a look at the following chart to see what I mean... 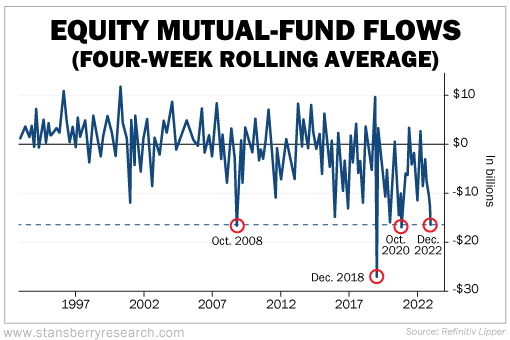 According to Refinitiv, this rapid pace of withdrawals from equity mutual funds has only happened three other times since it began tracking the data... The first was in October 2008 around the financial crisis... The second was in December 2018 as a brewing trade war with China and Federal Reserve interest-rate hikes led to a huge stock market drop... And the third was in October 2020 ahead of the last presidential election.

According to financial-data provider Morningstar, from 2010 to 2019 (pre-pandemic), mutual funds had an average of $356 billion coming in annually. So, this year has seen a huge move in the opposite direction.

It looks like the bulk of the money is going into the safety of cash. We can see that by observing the amount of funds going into money-market assets. Those funds invest in assets that are like cash and can be converted into dollars almost immediately. Take a look at the following chart... 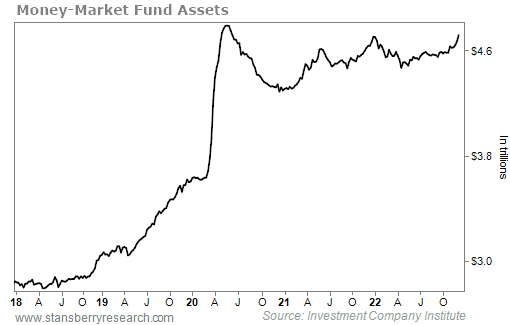 Since mid-June, the amount of assets has increased by more than $232 billion. That tells a similar story to the $254 billion number cited by Refinitiv

And, as you can see, the assets currently invested in money-market funds are back to levels last seen at the height of the COVID-19 pandemic. The current total is $4.72 trillion compared with $4.79 trillion in April 2020. Remember, in 2020, the economy was shut down due to COVID-19 and second-quarter gross domestic product had fallen 29.9%. This year's roughly flat economic output is a far cry from such a disaster.

Now let's take a look at what happened to the S&P 500 the last time there was so much money being stored in money-market funds. As you'll see in the chart below, big shifts into cash tend to coincide with stock market drops. But the past surges in dollars on the sidelines have preceded sizeable rallies for stocks... 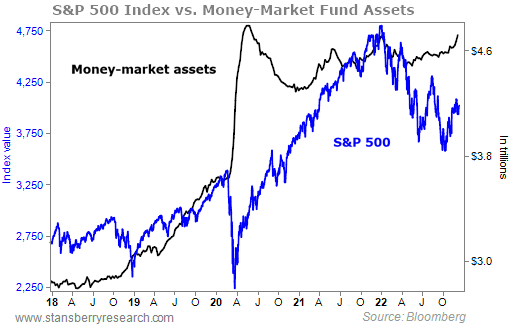 This tells me that the current buildup of uninvested money will lead to big gains in the S&P 500...

Given the magnitude of the shift in money out of stocks and into cash, we wanted to go back and look at the historical returns. We looked at the three extremes we highlighted earlier – October 2008, December 2018, and October 2020 – to see how the S&P 500 fared in the ensuing three, six, 12, and 24 months on a total return basis (dividends reinvested).

And what we found was astounding...

As you can see, investing in equities when the herd is running for the exit tends to produce outsized returns. The average 12-month gain is 27.5% – far exceeding the S&P 500's average annual gain of 9.1% per year. Even if the worst-case outcome of a 9.8% gain were to play out, you're still making more money.

Look, the investment world is currently riddled with uncertainty. The U.S. Bureau of Labor Statistics' Consumer Price Index reading for November came in at 7.1%. That means inflation is still high – though it's an improvement from the 9.1% number reported in June.

In addition, the Federal Reserve continues to raise interest rates. Since early March, the federal-funds target rate has gone from a range of 0% to 0.25% to the current range of 4% to 4.5%. But Chairman Jerome Powell has said the Fed will slow the pace of rate hikes going forward, as it doesn't want to crash the economy.

There's no guarantee that stocks won't fall further... Anything's possible. But based on what these metrics are telling us, all that extra cash is going to start burning a hole in investors' pockets. And when they start looking for places to earn money once more, they're inevitably going to return to stocks.