We're continuing with our review of previous market commentary today. This piece is focused on what we think are important drivers for lower inflation moving forward. It originally ran on October 24. Enjoy!

Economic data have yet to catch up with real-time inflation metrics...

And until that changes, the Federal Reserve will continue to press forward with its rate-hike plans.

The week of October 24 is the next in what seems like an unending string of important moments for global equity markets. We'll receive policy announcements from the European Central Bank and Bank of Japan. The former is growing increasingly hawkish, while the latter is content with maintaining easy-money policies to stoke inflation.

But they're not the only show in town... We also get preliminary details on how global economic growth fared in the third quarter, just as central banks everywhere grew increasingly aggressive on tightening monetary policy. The U.S., France, Germany, South Korea, and Taiwan all release important data.

But there's a catch... All of these numbers are backward-looking. The data doesn't survey what's happening now. It's capturing what transpired over the summer months. That's the period when everyone in the Northern Hemisphere likes to travel and spend. It also happens to be the weakest quarter in terms of year-over-year growth in 2021. So, the scenario sets up fairly decent growth metrics.

If we see strong third-quarter output numbers, especially in the U.S., it will signal to central banks and investors that the global economy is holding up despite their rate hikes. That would be the opposite of what they're seeking to accomplish.

In other words, strong growth numbers this week would support more interest-rate hikes, weighing on the near-term outlook for the S&P 500 Index...

Following two years of rampant demand and rental activity, the market has experienced a downturn much faster than expected. Jay Parsons, RealPage's head of Economics & Industry Principals, said that the pace of deceleration in the downturn was the most surprising. He said the occupancy rate has dropped from around 98% to 95%. Take a look... 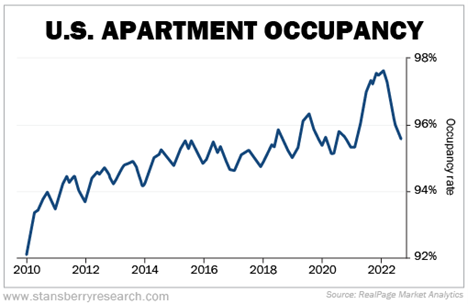 However, it typically takes a while before this type of shift shows up in the numbers. Apartment-rental companies aren't likely to drop prices the first time they see an ebb in potential customers. They'll want to see a sustained move before they make any changes. After all, shifting too soon could cost them potential profits. But, as we can see in the chart below, the changes just started to materialize at the end of the third quarter... 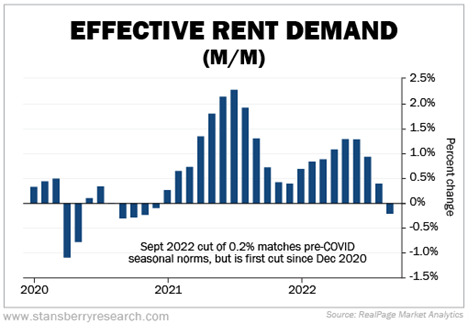 And then there's real-time inflation data from the regional Federal Reserve banks' monthly manufacturing surveys. So far this month, we've received data from New York and Philadelphia. Both reports show that producer prices have rebounded but consumers appear less willing to bear those costs.

Here's a chart of the prices-received component in the New York Fed's Empire State Manufacturing Survey. This measure tells us what companies are collecting for their finished goods... or what it costs individuals to buy something. So, we can think of it relative to the U.S. Bureau of Labor Statistics' Consumer Price Index ("CPI")... 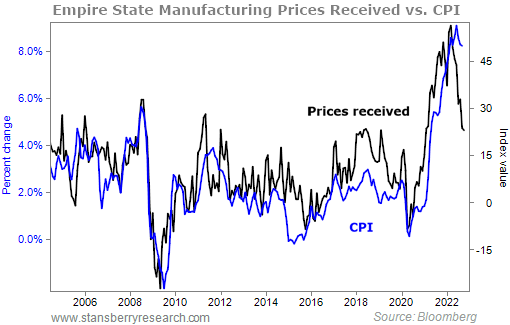 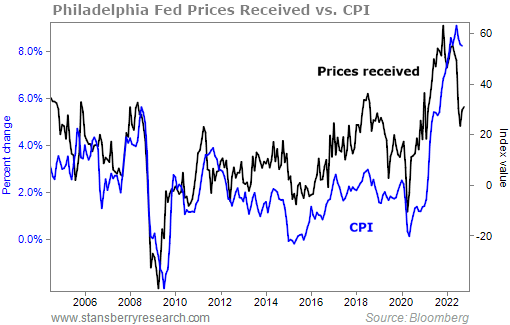 Both indexes are well off their highs from last year. They point to economic activity that's slowing because high inflation and rising interest rates mean households and businesses have less disposable income. So, they're becoming less willing to pay up for items that are "wants" and not "needs."

And lastly, here's another piece of data that will also take time to show up in the official economic figures...

It's the number of multifamily rental units currently under construction that were delayed due to the pandemic. It totals about 890,000, which is the highest level since February 1974... 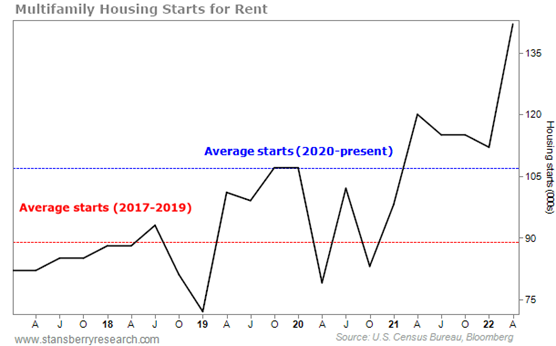 Now, according to commercial real estate information provider CoStar, much of the new supply is expected to come online in early 2023. The Federal National Mortgage Association said this will push vacancy rates higher and rental rates down.

So, if demand falls and supply is poised to increase, that means the rental market's balance should adjust quickly. This, in turn, will weigh on prices as management companies will want to fill empty units with occupants in a hurry. Eventually, this will lower housing demand even further because would-be homebuyers will opt for cheaper rentals instead, leading to declining housing prices.

With shelter holding the largest weighting in the CPI at 33%, any significant movement in the housing market will have an outsized effect on overall inflation. So a slowdown in shelter inflation should be the single-largest driver for a slowdown in headline inflation.

Right now, the stock market is fraught with uncertainty. Economic data point to slowing growth, especially as companies are rapidly changing their plans to hire people and even downsizing their staff. And while that may weigh on the near-term outlook for the stock market, this won't last forever.

Even so, these effects are going to take time to show up. As we demonstrated above, we're seeing, reading, and hearing all of the stories about slowing growth right now... But the lag effect of market-moving data means our central bank is making forward-looking decisions based on backward-looking statistics. Until that changes, it will keep pressing forward with interest-rate hikes.

That's why we want to keep our focus on the horizon... There's impetus building for a stock-market rally, but we're just not there yet.

Slowing inflation would signal to the Fed that its rate-hike policy is working. And the central bank could then back down on additional aggressive rate hikes. The shift will boost investor sentiment, encouraging them to put money back to work investing in risk assets like stocks.