This week, we're highlighting commentary from this past year that we think is key to the outlook for the S&P 500 Index in 2023. This piece originally ran on December 6. Enjoy!

If investors are looking for signals on the stock market's direction, there's no better indicator than this...

We want to keep a steady eye on the greenback as a risk-sentiment gauge. You see, money managers view the asset as a statement of the current amount of available liquidity in the financial system. In short, a weak dollar points to ample funds available, while a strong dollar means it's harder to borrow.

Hedge funds tend to be the most active institutional investors when it comes to turning over their positions. They typically leverage their portfolio by three- to five-times leverage to generate returns for their clients. So that kind of leverage on a $100 million portfolio means the assets traded would amount to $300 million to $500 million.

But that's not always going to be the case. As I mentioned, a rising dollar means the cost to borrow funds and generate greater portfolio returns will rise. That eats into money managers' profits. So, it makes it harder for them to produce results and diminishes their interest in increasing risk exposure.

At that point, money managers tend to pull money out of growth investments like tech stocks and wait for a better opportunity to get back in. Instead, they'll seek the safety of assets like U.S. Treasurys or single out stocks of steady dividend payers with strong balance sheets that pay steady dividends like Hershey (HSY). This is much like the flows we've seen since the start of this year.

But signs that the dollar is cratering signal that risk sentiment is beginning to rise. In other words, the currency is becoming more readily available and cheaper to borrow. And recently, the dollar has broken past a third key technical support level: its 200-day moving average. Check it out... 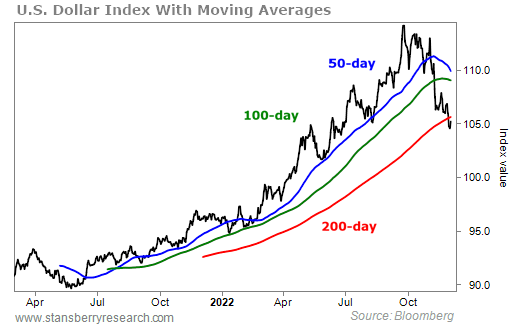 As you can see, the dollar is headed even lower... which should support a steady longer-term rally in the S&P 500.

Now, take a look at the following chart from the Commodities Futures Trading Commission ("CFTC"). It's part of the weekly Commitment of Traders report published every Friday afternoon. The picture shows us the net noncommercial positioning of speculators... 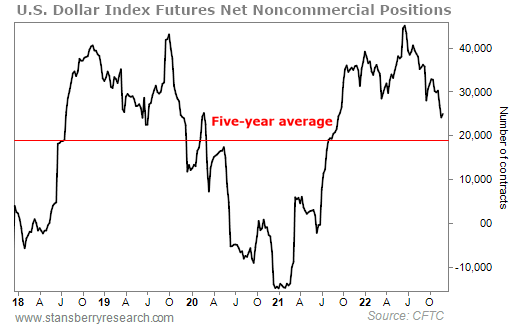 We want to look at net noncommercial positions because those are one-way bets on a specific commodity or financial product. That means the speculators aren't using the options contracts as a hedge against an underlying position for business purposes. Instead, it's solely to try and make a profit. And typically, the type of speculator that will make these large bets is a hedge fund.

The above chart tells us those speculators had been building long positions in the dollar, starting in mid-2021. They kept adding to their positions up until this summer. Back then, the driving force behind these increases was a hawkish Federal Reserve saying it'd tighten monetary policy by raising interest rates.

But now, we can see those same speculators are starting to unwind their longs in the dollar. The central bank has increased the federal-funds target range from 0% to 0.25% in March to 3.75% to 4% in November. And while the Fed isn't done raising rates, Chairman Jerome Powell has said it will likely slow the pace of hikes beginning this month.

However, the amount of dollar exposure is still high... The five-year average has been a net long of 18,835 contracts compared with the current long of 24,892 contracts. In other words, those speculators will be forced to unwind their bets which will place more downside on the dollar.

Now, let's look at the relationship between the dollar and the S&P 500... 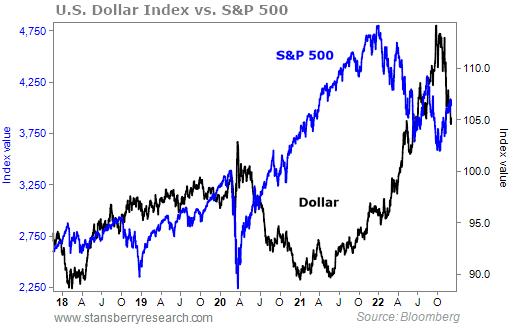 There's a simple logic behind this... The dollar's strength weighs on the sales of U.S. goods abroad because they become more expensive as foreign currencies weaken. Considering roughly 40% of S&P 500 member companies' revenue comes from overseas, you can see why the change would hold weight.

In the last decade, we've seen this type of breakdown in the dollar – where it falls sharply and moves below its 200-day moving average – happen twice: in May 2017 and again in May 2020. In each instance, it has pointed to above-average returns for the S&P 500...

So even though the Fed pledged to slow the pace of interest-rate increases, it'll still likely add a 50-basis-point hike when it meets later this month. That'll raise the federal-funds target range to 4.00% to 4.50%. But policymakers are also guiding for a level of 4.75% to 5.25% before they'll consider pausing. That means December's meeting would get us even closer to the peak interest rates.

And the sooner money managers get a sense of peak interest rates, the sooner they'll become more optimistic about risk assets like stocks, providing support for a rally in the S&P 500.