Europe is destined for little economic growth in 2023...

The issue at hand is inflation growth. Due to a weakening euro and gas prices exploding higher, the European Statistical Office's Consumer Price Index ("CPI") hit its highest level in October since the inception of the euro... 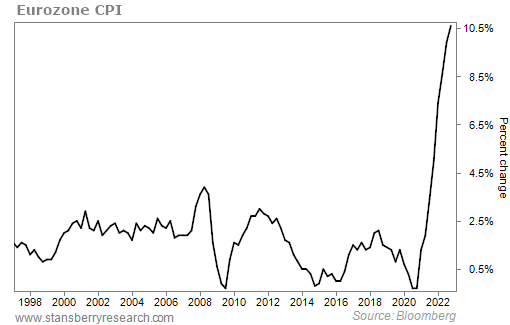 That presents a problem for the European Central Bank ("ECB"). Unless it gets inflation growth under control, households will continue to see their disposable income disappear. As that happens, the ability of individuals to buy discretionary goods will evaporate. In other words, their needs will outweigh their wants.

So, the ECB has little choice but to raise interest rates. It needs the euro to rise in value for buying power to increase... so households can stretch their budgets once more.

As the euro's value rises, it will weigh on the U.S. dollar. After all, the euro makes up around 55% of the Intercontinental Exchange's U.S. dollar basket. So when it goes up, the dollar falls. Take a look... 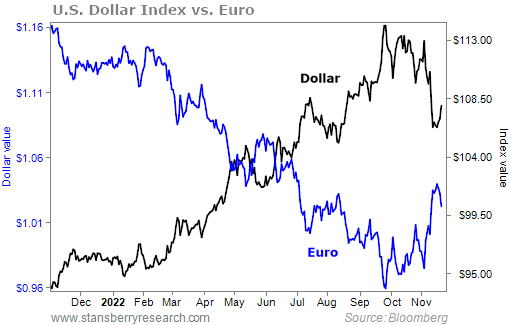 A declining dollar makes it easier for U.S. companies to sell their goods abroad. That, in turn, will support a long-term rally in the S&P 500 Index...

The Organization for Economic Cooperation and Development ("OECD") painted a bleak picture of the global economic outlook in its report released earlier this week. The OECD projects a 2.2% rise in global economic output in 2023, compared with this year's estimate of a 3.1% increase. And that's a sizable slowdown from the 2021 growth figure north of 6.0%.

But the OECD expects the hardest-hit region to be the eurozone. The OECD's outlook for the 19 countries comprising the currency union's economy shows 2023 economic output expanding at a meager 0.5%.

A forecasted eurozone slowdown is especially magnified when we see the country-by-country data. For instance, the region's largest economy, Germany, is predicted to see a 0.3% contraction in 2023. Take a look at the full breakdown below... 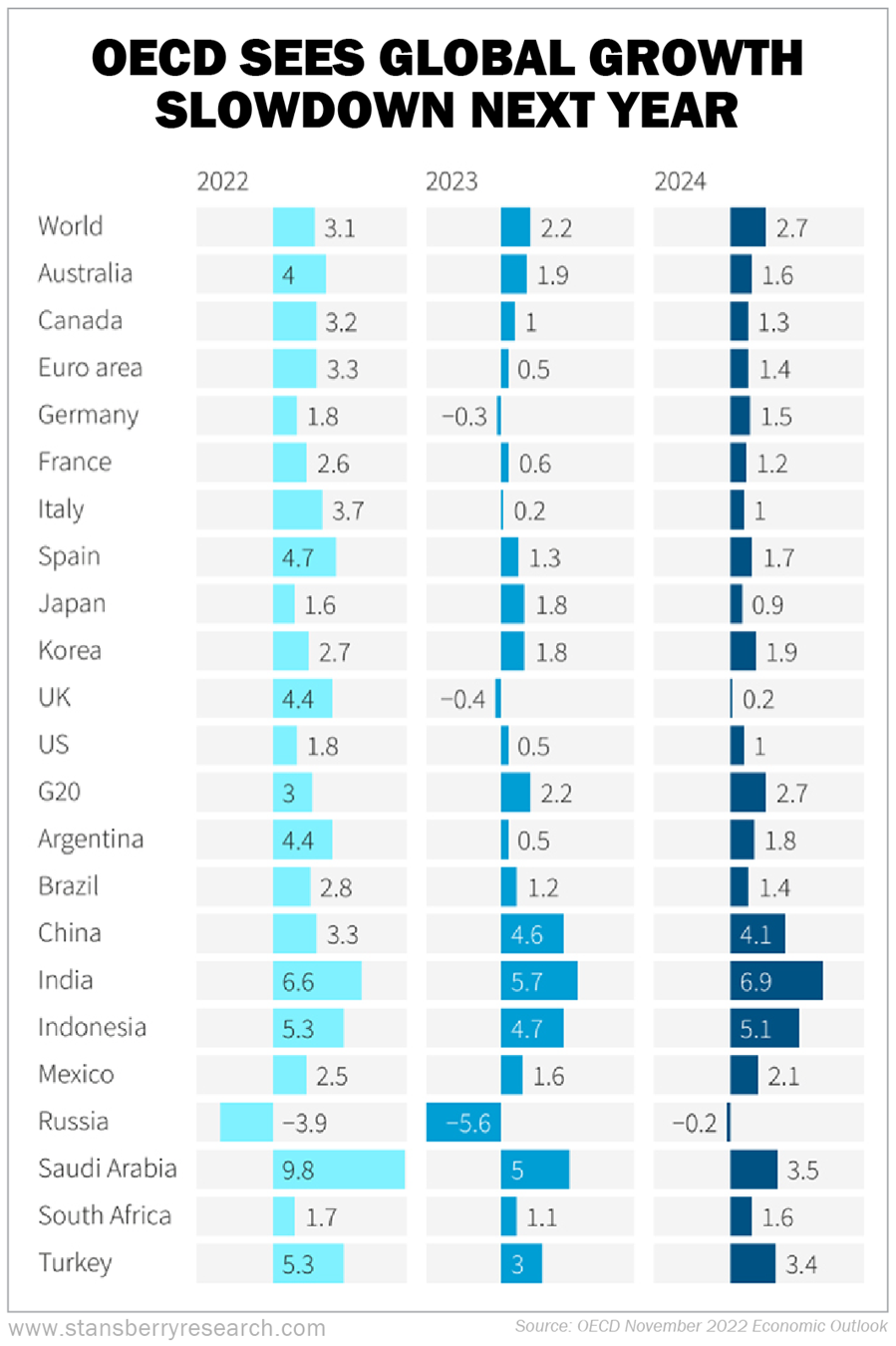 High inflation has hurt the eurozone since the start of the year. It commenced with Russia's invasion of Ukraine – energy prices soared as uncertainty surrounding the global supply of oil and other commodities skyrocketed... creating a greater drag on economic output.

While signs are emerging that indicate inflation could be close to peaking, the OECD said it's unlikely to fall back toward the 2% level targeted by global central banks anytime soon. In the report, the OECD's Chief Economist Álvaro Santos Pereira said the global economy was "reeling from the largest energy crisis since the 1970s".

Even more, the OECD forecasts inflation to remain stubbornly high in Europe. The research group projects the eurozone's inflation rate to average 6.8% in 2023, an increase from its September average of 6.2%.

This is largely due to the Federal Reserve's rapid pace of rate hikes this year compared with the ECB's, as shown in the chart below. The OECD warned that the ECB must continue to raise rates at a quick pace and bridge the large rate gap between that of its U.S. counterpart. 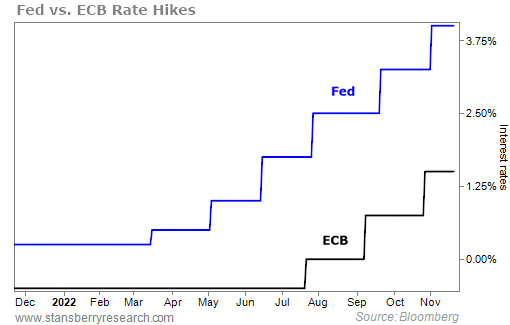 While continued rate increases in the face of slowing economic growth may seem counterintuitive, we must consider the inflation outcome. Bringing inflation growth back down to target provides price stability. As that happens, households can better budget their income and spending patterns. That allows disposable income to recover and the purchase of goods to increase.

Put simply, the sooner the ECB gets interest rates to a level where it weighs on inflation, the quicker its economy can recover.

The Fed appears to be close to opting for a slowdown in rate hikes. Wednesday's meeting minutes showed the majority of policymakers anticipate this outcome soon. Meanwhile, a continuation of hawkish ECB policy (one inclined to raise rates) would further extend the euro's recovery against the dollar – and prevent further price increases on imported goods and services in Europe, lowering inflation.

Take a look at the relationship between the euro and the S&P 500... 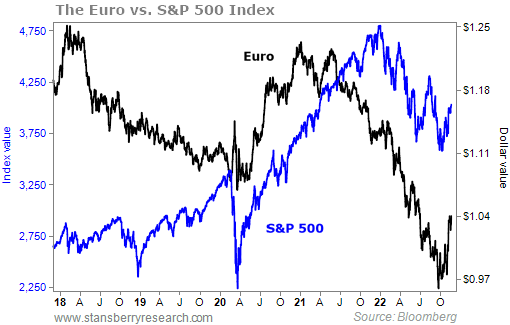 The bottom line is that the ECB needs to play catch-up to the Fed. Otherwise, the region could be vaulted into a generationally bad era of stagflation – an economic cycle characterized by high inflation and low economic growth. Until we see a Fed pivot and continuation of aggressive ECB rate policy, any outright optimism for a European recovery and rally in the S&P 500 is just speculation.

Nevertheless, investors will be ready to invest in a higher return potential as soon as the Fed and ECB policy paths reverse. This outcome will provide a boost to the euro and S&P 500.