And for money managers looking to see sharp gains in the number of unemployed, the result is exactly what they want to see.

According to the U.S. Department of Labor, another 240,000 individuals filed initial jobless claims in the week ending November  19. The number came in below the prior week's figure of 223,000 and Wall Street's estimate of 225,000.

This week's report continues the upswing that began in the back half of September.

However, until we see a sustained move lower in the number of available jobs, unemployment claims are unlikely to experience a meaningful jump.

Earlier this month, the U.S. Bureau of Labor Statistics' Job Openings and Labor Turnover Survey ("JOLTS") for September. The results showed there were 10.7 million job openings. That's a big jump from August’s 10.3 million yet below July’s reading of 11.2 million. And it's still well above both the pre-pandemic peak of 7.6 million and the post-pandemic average of 9.1 million, even though the number is slowly moving in the right direction… 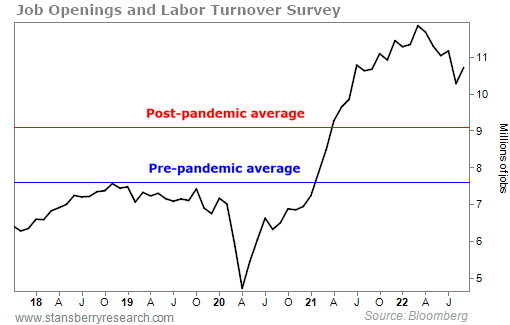 The Federal Reserve is focused on whether individuals are still having a difficult time finding a job... And based on the above data, that’s not yet the case. So the current employment dynamics still support the central bank’s efforts to hike interest rates in an attempt to arrest inflation gains.

Even though jobless claims numbers are still above the 60-year low set in mid-March, the recent trend has done little to ally money managers’ concerns about the path of interest rates. As the Fed has raised the federal funds target range, it has wanted to see a noticeable increase in unemployment numbers. 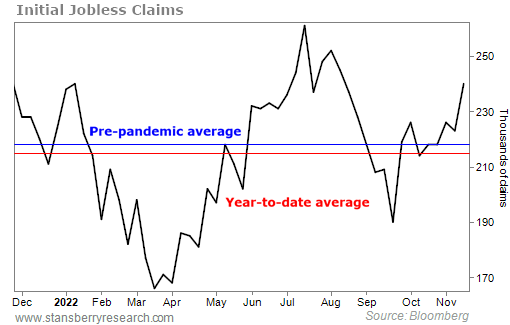 Yet, it’s worth noting the year-to-date average is closing the gap with pre-pandemic levels. Take a look at the following chart from late September. In the eyes of the central bank, this is a move in the right direction but it wants to see this year’s numbers move higher… 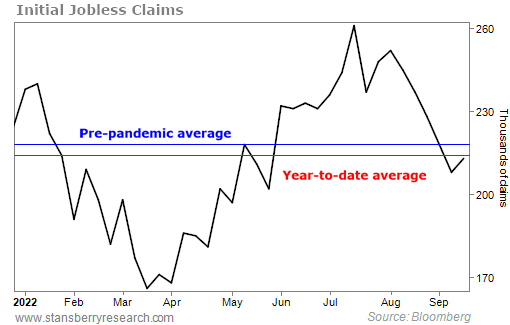 Institutional investors have worried that a lack of gains in the unemployment data could encourage the central bank to continue with its rate hike plans longer than previously anticipated. In fact, Fed Chairman Jerome Powell stated at the November monetary policy meeting he’s surprised by the lack of rising labor supply. As a result he feels central bank guidance for peak interest rates likely needs to move higher.

If we see jobless claims remain below 2019's average of 218,000, it confirms there's still plenty of demand for workers and that the labor market remains tight. This would support the Fed continuing to raise interest rates. But, if we see the numbers steadily move higher, that implies rate hikes are having the desired effect on the economy.

For the stock market to see a sustainable rally, we'll need to see the number of average jobless claims move back above pre-pandemic levels, remain there, and keep going up. This would signal to the central bank that economic activity is cooling... and inflation should back off.

So, today’s data is a step in the right direction but not yet a convincing one. Powell has said rising unemployment would be an "ideal outcome." Now we need to see consistent follow-through in the weeks ahead.