The Fed May Be Preparing to Cool Off…

Yesterday marked a significant anniversary in the stock market...

The largest and most actively traded fund in the world turned 30!

Let's talk about this exciting milestone and what it means for the exchange-traded fund ("ETF") in question and ETFs in general. And we'll discuss how it all relates to a strategy that I personally use to get broad exposure in the market.

Then, we'll shift our focus to the Federal Reserve.

McCall's Call: On January 22, 1993, State Street Global Advisors launched the very first ETF in the U.S. – the SPY. The fund provided everyday investors with an easy, low-cost way to gain exposure to the entire S&P 500 Index.

What started as one ETF 30 years ago has turned into a massive part of the stock market. On any given day, the SPY now trades more than $32 billion in volume. But it's just one small part of the ETF boom...

According to the Investment Company Institute, there were more than 2,800 ETFs with $6.75 trillion in assets under management at the end of November. These ETFs track nearly every industry and every possible investing strategy available to investors.

There are ETFs for income and growth... even subsectors like transports and megatrends like clean-energy infrastructure. So it's no surprise that ETF fund flows have taken off recently. 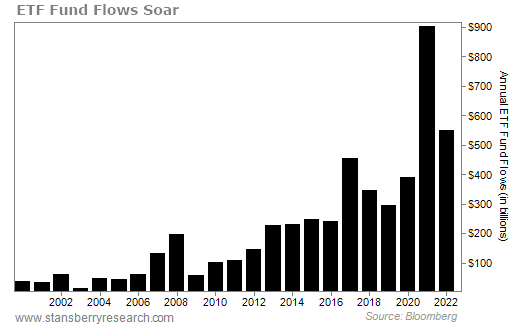 In the past two years, ETFs have seen their largest inflows ever – with 2021 nearly doubling the previous record set in 2017. And while we may not see those highs again anytime soon, ETFs still have a huge part to play in the market.

Longtime subscribers to The McCall Report and MegaTrend Investor know that I don't recommend investing directly in ETFs. These investment vehicles are great for offering broad exposure to a trend or sector, but sometimes the stocks they hold don't perfectly fit the investing theme I'm after.

Instead, we use something called the "basket approach." We invest in not just one or two stocks within a megatrend – but a handful of the best-positioned companies in an industry.

You can think of this as creating our own ETF, but with only the stocks we really want to own. We concentrate on the stocks with the most potential and leave behind the laggards and "just average" companies.

This way, we get the maximum amount of upside potential while limiting all single-company risk on the downside.

In fact, in MegaTrend Investor, we added a brand-new basket just last week to increase our exposure to the sports megatrend...

The privilege of owning a professional sports team is reserved for the ultra-wealthy – the "one percenters" of the world. In other words, it's nearly impossible for people like you and me to actually stake a claim in sports teams themselves.

But more recently, some sports teams have found their way onto the public market, allowing everyday investors to buy stock in some of the most well-known franchises out there.

One of those franchises is trading at a huge discount to its underlying assets right now. And because I believe 2023 is going to be a big year for sports-team valuations, now is the time to jump in.

If you're not yet a subscriber to MegaTrend Investor and want to find out how to gain access to this brand-new portfolio and the two stocks it includes, I encourage you to click here now.

The Fed is preparing for a milder interest-rate increase in February.

McCall's Call: The Fed is up to more of its games...

Just last week in an interview with former hedge-fund manager Hugh Hendry, I told you that I expect the Fed to lower rates at some point this year. I'm not saying that will happen at the next couple meetings – the Fed has been clear that it wants to get rates a bit higher.

But rates could come back down by year-end, or early in 2024.

Recently, though, the Fed has dropped some breadcrumbs – as it often does before a policy change – that suggest it might be considering a slightly different path...

Last Friday, Fed Governor Christopher Waller stated that he supported a smaller 25-basis-point (0.25%) rate hike at its next meeting (January 31 to February 1). That's largely what the market was expecting... And now nearly all analysts (99.8%) expect the central bank to go with that 0.25% increase.

Then, over the weekend, the Wall Street Journal reported that the Fed has laid out a slower interest-rate hiking path. It indicates that Fed officials are moving to a "wait and see" approach and that it could stop hiking interest rates altogether in just the next few months.

Interest-rate hikes take time to flow through the economy. Some sectors feel the pinch right away, but for the most part, it takes months before these changes in monetary policy take hold.

The Fed knows this, and it wants to see how its recent rapid-hiking cycle will impact stocks, housing, and the jobs market moving forward.

That means that inflation data will continue to be key in the next few months. The next round comes out this Friday, when the Fed's preferred inflation metric – the personal consumption expenditures price index – is released.

If inflation continues to cool off, there's a good chance that the Fed will stop hiking rates after its February meeting. That would be a positive for stocks in general and could also take some pressure off the housing market.

I've been steadfast in my view that inflation has peaked. So I think this path forward is the most likely outcome.

And the market appears to agree. In the time since the Fed started hinting at this strategy, stocks have gone straight up.

I don't expect that to ultimately be the case. This won't be a straight line back up to highs, and we'll continue to see ups and downs in stocks.

But investors are clearly beginning to realize that some of the market's major headwinds are fading. And if you've been following along here in Daily Insight, then you should be well ahead of the game.

Did You Miss My Latest Podcast?

The rally we've seen to jump-start 2023 has been fading recently. While I'm still bullish on stocks this year, the general consensus remains mixed. Many analysts expect a rough first half before stocks finally put in a long-term bottom. And our guest on the newest episode of Making Money With Matt McCall is in that camp.

Former hedge-fund manager and fellow podcaster Hugh Hendry believes the market has lower to go... and he backs up his claims with a discussion of the Federal Reserve. We agree that the central bank has made mistakes, but we disagree on how its next moves will affect the market. Then, Hugh shares his "island stock" pick... and it just so happens to be one that nobody has recommended yet.