Throw Out the Old Playbook

Editor's note: We're going back to the drawing board...

Sky-high inflation and rampant supply-chain disruptions led to a massive decline in stocks in 2022. This prompted many investors to flee the market to avoid putting their portfolios at risk, although some stubborn folks bought falling stocks in hopes of huge profits once the downtrend reverses. But with uncertainty still weighing on the markets, stocks still have plenty of room to fall further...

That's why Ten Stock Trader editor Greg Diamond says it's time to revise our investment plan from 2022 and start fresh with an updated strategy for the new year.

In today's Masters Series, adapted from the November 21, 2022 Weekly Market Outlook issue, Greg explains why it's critical for investors to avoid buying declining stocks before they bottom... highlights three struggling stocks that could fall much further in 2023... and reveals how investors should adjust their investment strategy this year...

Throw Out the Old Playbook

Today, I'm sharing a list of stocks that you shouldn't buy... based on a shift in our market playbook.

I called the bottom of the stock market (based on the performance of many stocks) on October 13.

I discussed all the evidence (and caveats) of a low with my readers recently.

So whether you realize it or not, we're in a new market environment. That means you shouldn't trade using the old playbook.

In that playbook, most stocks and sectors followed uptrends and downtrends together. However, persistent inflation and the Federal Reserve's monetary policies have rewritten the old playbook in 2023.

Simply put, the U.S. just went through a recession.

The Fed won't admit it (nor will any Washington, D.C. politician), but that's exactly what the central bank wanted, to drive down inflation... and it worked. In 10 months, I bet you'll hear economists (who look at everything in the rearview mirror) state that we were in a recession. But now, everything is just fine.

The key point is that markets are forward-looking while economists are backward-looking.

Many stocks have already priced in the recession and are now looking forward. But some stocks, as I'll outline next, will struggle.

This is the new playbook... While inflation is coming down, interest rates are still very high.

Now, I don't know where you live, but here in Virginia, it's chilly. That means I'm beginning to light up my fireplace...

If you're living in a similar climate, take the old playbook and toss it into that fireplace.

The fact is, many investors and traders will feel confused (if they don't already) about this transition and what comes next in the markets.

Today, we're looking at a few stocks that will likely struggle over the next few months.

We can trade these stocks from the short side by buying puts. But we need to be careful...

One of the more popular sayings in trading is, "Don't catch a falling knife."

In other words, wait for the stock price to bottom out before buying.

Just because a stock is falling, and you can get in cheap, doesn't mean you'll make money on it. In fact, buying a cheap stock can actually hurt your portfolio as it continues to decline... It's like catching a falling knife.

Let's review some stocks that have lost more than 50% of their value over the past few years. If I'm correct, these stocks have much more downside ahead.

First up is Software as a Service business DocuSign (DOCU)... 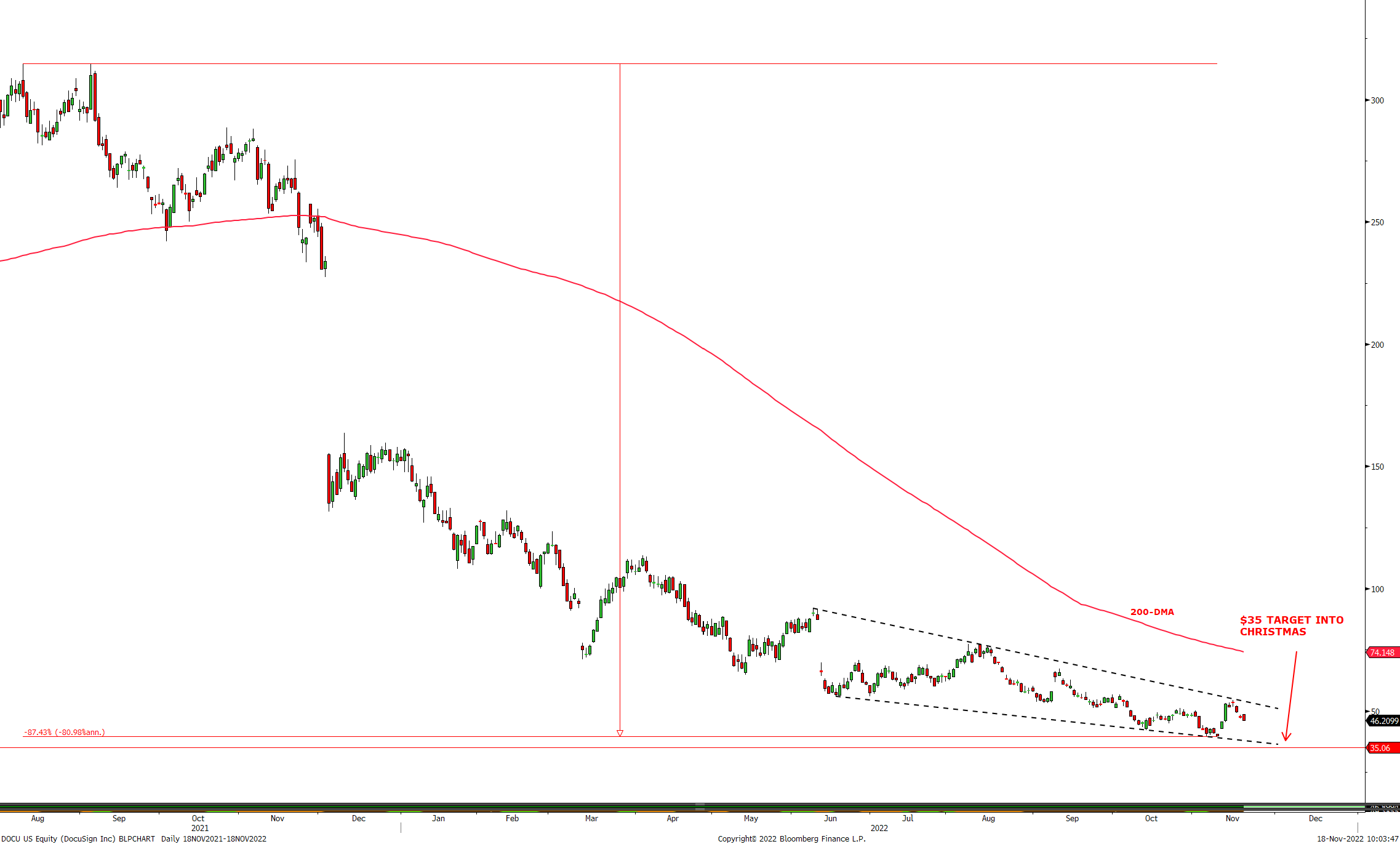 This is the definition of a falling knife.

DocuSign will have a difficult time rallying above its 200-day moving average (200-DMA), marked in red above, within this downtrend. (I noted the converging pattern with black dashed lines above.)

Note that Splunk attempted to rally above its 200-DMA a few times. But the stock failed and has trended lower ever since.

Block has lost more than 70% of its value from its August 2021 high. I had recently considered trading this stock from the long side by buying calls (if it could make a new higher high). But the price action is telling me this isn't the right move... Block is likely to continue its downtrend.

Notice the blue box on the Composite Index ("CI") above... Every time this indicator enters that blue zone, the stock price falls. The CI reached that zone again recently and dropped.

Now, looking at the last major swing high in August 2022, notice how the recent rally stalled at the blue line. That's the Fibonacci retracement level. It shows where support and resistance are likely... in other words, the level where a stock is likely to reverse direction.

In the Block price chart, we can see significant resistance at that 61.8% level. The stock failed to punch through it, marking another failed swing high within the downtrend.

The message is clear... Some stocks are doing great while others, like DocuSign, Splunk, and Block, are losing most of their value. This is the new playbook for investors.

It also means we can make both short and long trades in the months ahead.

Remember, just because a stock has lost most of its value doesn't mean it's worth buying. That weak stock can keep dropping...

So don't be left catching the knife.

Editor's note: Greg believes we could be nearing a breaking point. He says we're on the verge of a generational moneymaking opportunity for investors. But folks who don't know what's coming could be left behind...

That's why Greg hosted an online presentation earlier this week to discuss how an upcoming rare market event could give you the opportunity to double your money 10 different times. And you'll get the ticker symbol of his No. 1 investment for 2023. Learn more here...