Exactly When the Fed Could Pause... or Pivot

Handicapping the Federal Reserve's interest-rate plans... What history suggests... Exactly when the Fed might pause – or pivot... The bullish case for stocks afterward... A big opportunity hidden in plain sight...

Editor's note: Today, we're bringing you a special analysis from Stansberry NewsWire editor C. Scott Garliss. Scott has run the numbers on when the Federal Reserve might stop its current interest-rate hike plans and how the move could influence U.S. stock prices.

In the following essay, adapted from a version he published in our free NewsWire service earlier this week, Scott breaks down precisely when and why the Fed may hit the pause button on the rate-hike cycle... and shares some relevant history that suggests a rally for stocks if they do.

To get more great insight from Scott and the NewsWire team every single day, including pre-market commentaries, afternoon recaps, and exclusive analysis, make sure you're signed up to receive their latest updates – for free. You can do so right here.

Big gains for stocks could be right around the corner...

Since the start of this year, the Federal Reserve has been raising interest rates to try to get a handle on inflation. After all, the U.S. Bureau of Labor Statistics' Consumer Price Index ("CPI") hit a four-decade high of 9.1% in June.

Rampant high inflation is destroying the disposable income of households and businesses.

So, the U.S. central bank is trying to slow inflation growth and bring on price stability. That way, consumers and companies can better understand what their incomes will look like... and then they can better budget their money.

The Fed has said it needs to kill economic demand to get inflation back under control. Its best tool for doing that is raising interest rates. However, that means it costs more to borrow in the economy... making the dollar more valuable.

As a result, higher interest rates pull money out of the financial system because the dollar's value rises and investors want to pour more money into the safety of higher-yielding U.S. Treasury bonds.

But as I (C. Scott Garliss) will explain today, this story won't go on forever...

Based on recent commentary from central-bank policymakers like San Francisco Fed President Mary Daly and St. Louis Fed President James Bullard, interest rates need to get to at least 5% before the Fed will pause or stop raising rates.

The federal-funds rate is already pegged in a range near 4%, so that would imply most of the rate hikes are behind us. Heck, even Fed Governor Christopher Waller – a noted hawk (meaning he's inclined to raise interest rates) – said last week that he's open to slowing the pace of hikes.

This is important information because when we look at stock market outcomes from past rate-hike-cycle peaks, they show that an interest-rate policy pause will act as a tailwind for the S&P 500 Index.

Here is what the data tell us...

Fiscal (government) and monetary (central bank) policies during the COVID-19 pandemic created trillions of dollars' worth of liquidity that previously didn't exist in the financial system.

All of the consequent spending caused domestic economic output to rise last year by 5.7% versus the 2.3% average between 2009 and 2019.

Inflation has run as high as it has in 40 years, and the Fed began hiking interest rates in March. And, as you can see in the chart below, this has resulted in one of the fastest tightening cycles on record... 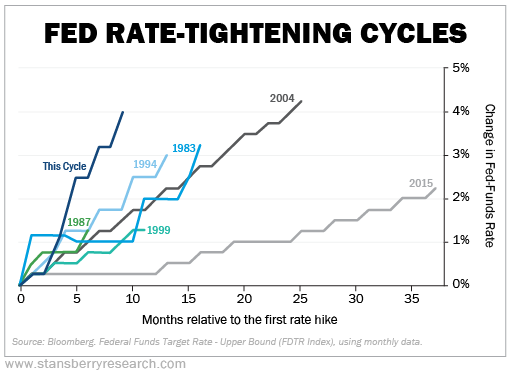 Throughout this year, members of the central bank have said they want to get to a point where they feel monetary policy is restrictive once more – in other words, where it's weighing on inflation growth.

A number of policymakers, including Fed Vice Chair Lael Brainard, have said we're already there. But they'd like to go a bit further to ensure inflation growth comes back to the 2% target.

So, considering the fed-funds rate is already at 4%, that means we don't have much further until we hit the 5% mark.

In past rate-hike cycles, the Fed has sought to keep raising rates until the "real" fed-funds rate turns positive. That metric is derived from current interest rates minus CPI annualized growth.

Back in March, the number stood at negative 8%. But since then, as inflation growth has eased and interest rates have jumped, the number has dropped to negative 4.5% in October... 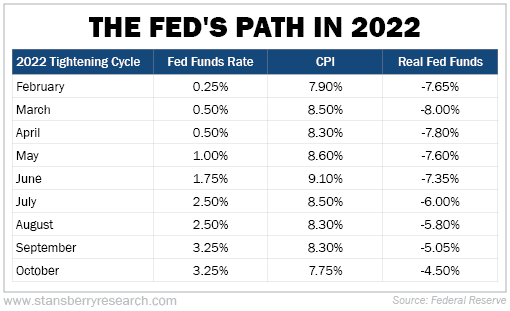 Still, the Fed has some ways to go before it can expect the real fed-funds rate to be in positive territory and, based on history, eventually get to a level that is restrictive enough to curb inflation over a longer term.

Here's what the same metrics above have looked like on a historical basis... 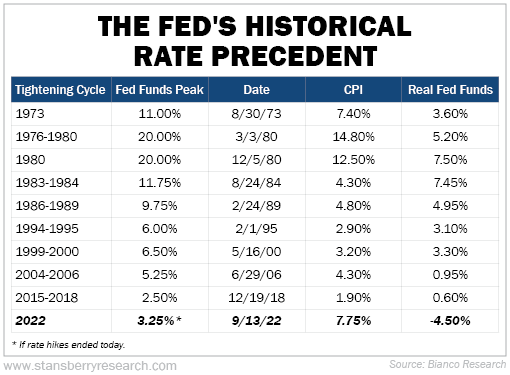 Federal Reserve Chair Jerome Powell has told us this is an outcome the central bank is currently seeking. At the last policy meeting in November, he said the real fed-funds rate must turn positive before the central bank would consider pausing its rate hikes.

Again, this change in policy will likely function as a tailwind for the S&P 500 Index. I will show the precedent momentarily...

The timing for a pause or pivot...

So, with history as our guide, we want to try to discover when a positive real fed-funds rate might arrive. We turned to the monthly CPI growth as our guide.

Since July, the number has averaged an increase of around 0.25%. Over the past five years, the gain has averaged closer to 0.3%.

So, we modeled how long it would take for the real fed-funds rate to turn positive based on 0.2% monthly inflation growth... 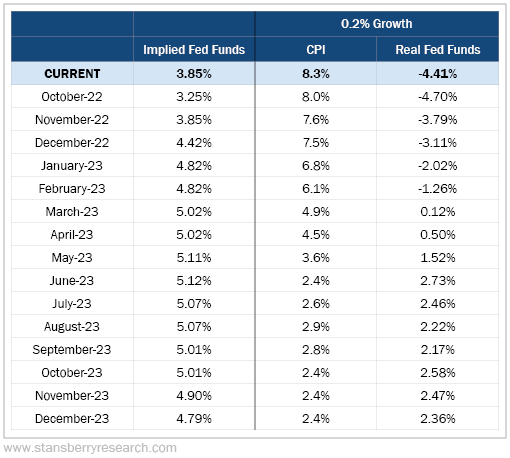 And again, this time based on monthly CPI growth of 0.3%, the five-year average... 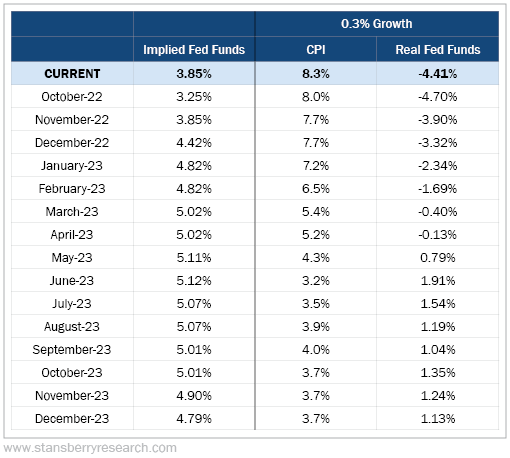 Based on the first table, we could see the real fed-funds rate turn positive as soon as March. And according to the second table, it may not happen until May. But that also tells us the rate-hike cycle's end could be as soon as the first or second quarter of next year.

The next step we took in this analysis was to look at the S&P 500's performance once rate increases have stopped and the first rate cut has come into play. We observed all of the cycles going back to 1980 when inflation growth was this high. 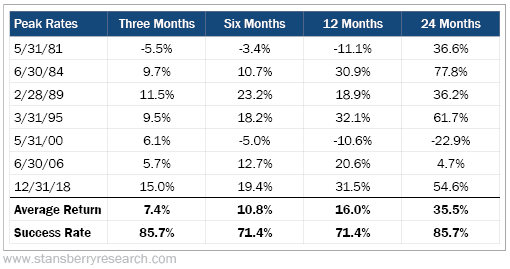 And here are the S&P 500's total returns over the same durations after the central bank has started cutting rates... We're not at this point of the discussion yet, but it's important context to keep in mind... 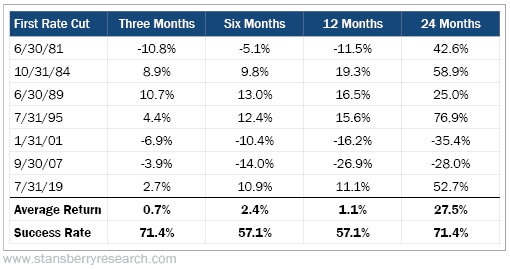 When investors are fearful of the central bank aggressively raising rates, they want to hang on to their money. After all, the investing environment is fraught with uncertainty. With debt more expensive, liquidity dries up and investors are uncertain of how rising rates will affect consumer sentiment and balance sheets.

And when money managers are uncertain, they tend to sell first and ask questions later.

So, by raising funds now, those money managers are sitting on cash or in safety assets like U.S. Treasury bonds, seeking the opportunity to invest it once more.

Based on the above results, once investors get a sense that uncertainty is gone, they begin to pile back into risk assets like stocks. And the gains are far better than the roughly 11% annual return for the S&P 500 since 1980.

A lot can change between now and March...

For instance, we could see inflation slow further next month as the central bank continues its tightening, speeding up the path to positive rates. But this exercise at least gives us an idea of when the Fed might start considering that rate hikes are weighing on inflation.

That's an important time frame for money managers trying to forecast the end of the Fed's rate-hike cycle.

You see, yields are becoming increasingly attractive on U.S. Treasurys and on companies with fortress-like balance sheets and steady cash flows – like Hershey (HSY), McDonald's (MCD), or Coca-Cola (KO). Big-money investors don't want to miss out on these short-term returns.

Then, if the Fed pauses rate hikes and inflation declines, yields will begin to fall. Then those same money managers will work their way down the investment food chain, looking for other riskier opportunities and attractive returns... in turn, supporting a long-term rally in the S&P 500.

So now is the time to start doing our homework and preparing...

It's a great time to get to work... as opposed to purely speculating on tech or unproven growth names in a 0% interest world, then basking in "bull market genius" status.

This is an opportunity to really separate yourself from other folks with money in the markets who aren't paying attention to what's really going on.

As you may have read here lately, certain sectors have been performing better than others since the broader market's most recent low last month. Energy stocks are leading the market. But another sector on the move represents a huge industry hiding in plain sight...

This sector has outperformed the S&P 500 and tech-heavy Nasdaq Composite Index through every market crash of the past 30 years. It was up in 2000... and again in 2008. It's a "forever" investment in any market... but right now the opportunity is far bigger than usual.

But you need to act before 2023 or you'll miss the biggest gains, by far. To get all the details, click here to listen to this full message from Stansberry Research partner Dr. David "Doc" Eifrig.

In this new video, Doc explains why what I'm talking about is the biggest opportunity he has seen in his 15 years with our company (and four decades in the markets)... and he shares where exactly to put your money to take advantage of it. Learn more now.

A quick housekeeping note before we get to the mailbag: Our offices are closed tomorrow and Friday for the Thanksgiving holiday. We'll publish our Masters Series essays this weekend, then pick back up with our regular fare on Monday.

Now, for today's mail, we have feedback on Kodak's intentions two years ago to get into the pharmaceutical business, which we mentioned on Monday... and more thoughts on the jobs market, which we talked about in yesterday's mail... As always, if you have a comment or question, send your notes to [email protected].

"I think what you say about Kodak is a little unfair. The firm had been making blood plasma expanders for use during surgery for some 50 years. And I believe that as they saw the demise of their film business they had a pharma division that they were expanding to make a range of over-the-counter drugs." – Paid-up subscriber Tim W.

"Dear Corey et al, To further expand upon your discussion on unemployment, the fact that the working population has grown by five million [since February 2020] but the jobs haven't kept pace is very concerning from an economic standpoint.

"Production ultimately creates demand. When people aren't working, they aren't producing. Our current economic malaise is primarily due to the problems we have with supply. This is the whiplash effects of shutting down production and its cascading effects worldwide.

"If our supply problems aren't corrected, what happens to our future demand? Eventually, we all become poorer from the lack of production. This isn't a straight line, but one can identify the marginal influences." – Paid-up subscriber Bret R.