A.I. Will Transform the Way We Educate

With all the recent advancements in artificial intelligence, I’ve been thinking a lot about education lately.

Whether you’re in university now or have children or grandchildren gearing up for a formal degreed education, these technological advancements are about to flip the “business” of university degrees on its head.

When I was earning my B.S. in aeronautical and astronautical engineering back in the late 80’s, homework was still a very manual process. I remember handwriting my homework. Some problems took more than 10 pages of handwritten calculations to solve. And when we had to produce a hand-drawn graph, it was even worse.

Back then, computers weren’t very friendly. You had to understand programming languages like Fortran or Pascal to use them. And you had to spend nights in a computer lab just to gain access to a mainframe computer. It wasn’t very fun.

But that didn’t mean education improved. It only made doing homework easier – as it was less time intensive.

There haven’t been many challenges to the “way” of educating over the years. One of the most radical methods was to drop out of school all together.

But venture capitalist Peter Thiel went out on a limb more than a decade ago and founded the Thiel Fellowship.

The idea was simple.

Rather than enter the traditional education system and take a more traditional career track while racking up massive debt, the Thiel Fellowship grants $100,000 to promising young students who want to innovate and build something truly new.

It was an experiment, and a controversial one at that. Universities didn’t like it much at all. But the Thiel Fellowship persisted. Looking back over the last decade, the experiment was successful.

Companies like Figma, Luminar, Upstart, and Workflow (acquired by Apple) sprung out of the Thiel Fellowship. And blockchain projects like Ethereum, Augur, and Polkadot did the same. In all, Thiel Fellows founded companies now worth more than $400 billion… all without pursuing traditional university degrees.

The education system has been remarkably slow to evolve over the decades. The reality is that there simply hasn’t been a big enough catalyst for fundamental change.

And the Thiel Fellowship, while fantastic, is only accessible to a very limited number of candidates… which is where artificial intelligence comes into play.

Today’s education system largely treats every student the same with few exceptions. Course instruction consists of one (teacher) to many (students). That means that the style/method of instruction is the same for all learners.

To say that this leads to suboptimal outcomes is an understatement.

Artificial intelligence will change that. Not only will it have a complete grasp of any given subject matter, but it will also be able to adjust its teaching style in ways that will be optimal for each individual student.

The technology will democratize access to education on a global scale, including higher education. This is most certainly seen as a threat by those who benefit from the “old way” of doing things.

But the smartest of the bunch won’t spend their energy trying to implement guardrails and policies to block its use. They’ll actively look for ways to incorporate the technology to improve and accelerate both individual and group learning. It will become part of the process of learning, not a threat to the institutions of learning.

This is a very exciting time. And for those that might be pursuing an undergraduate degree, I can offer one piece of advance: Double major.

Yes, there’s some extra work and some additional classes. But it will be worth it. Major in computer science, plus whatever field of study you’re most passionate about. Doing so is one of the best ways to be relevant and attractive in the quickly evolving work force.

It’s been a while since we’ve checked on Boston Dynamics. But a new development at the company just caught my eye…

Remember that Boston Dynamics is behind the impressive bipedal robot Atlas. This is the robot capable of incredibly acrobatic movements such as back flips.

That’s because Atlas lacked “hands” with an opposable digit. Which means it could not grip, lift, or move items. That limits the robot’s usefulness.

But this just changed in a big way…

Boston Dynamics just released an updated demonstration of Atlas. Check it out:

Here we can see that Atlas finally has hands. It’s able to pick up and move items intelligently. And Atlas even showed off the ability to toss a heavy tool bag up to a human worker. It did this by twisting its body as it jumped in the air.

This kind of movement may come natural to us humans. But it’s incredibly difficult to develop a robot that can perform these activities. What’s natural for humans is still a complex engineering problem to solve.

So, Boston Dynamics is advancing its hardware and software rapidly now. And this signals that the race is on…

As we discussed last October, Tesla expects to have its own bipedal robot, Optimus, available – I like to think of this as a pre-commercial model – before 2023 is out. That announcement last year was a catalyst that ignited the entire robotics industry.

Robotics is going to be a hot area of development this year. And other industry players don’t want to be left in the dust, just as the entire automotive industry was left behind as Tesla’s electric vehicles got a massive head start.

This “Tesla catalyst” is happening at an important time. Autonomous technology like these bipedal robots could be the answer to the ongoing labor shortage. We’ve been covering that trend quite a bit here in The Bleeding Edge. Many industries simply can’t find enough labor to perform some of the menial, labor intensive work that humans aren’t well suited for.s

Sometime in the near future, we may see Optimus or Atlas delivering packages to our door or carrying equipment through a busy construction site. We’ll see this happening with prototypes and pilots later this year, and I fully expect the early stages of commercial deployments in 2024.

As a reminder, Stability AI published the dataset on which it trained its generative AI Stable Diffusion. And it turns out that dataset contains publicly available stock photos… many with the Getty Images watermark on them.

These are copyrighted images. And Getty Images is claiming that feeding these images to the AI amounts to copyright infringement. This was the first lawsuit of its kind in history.

Well, on a similar note, a group of artists just joined together for another first-of-its-kind lawsuit. It’s a class action suit against Stability AI, Midjourney, and a company called Deviant Art. These three companies each have a similar text-to-image generative AI.

To me, this is probably even more interesting than Getty’s lawsuit.

That’s because one of the popular things people have used generative AI’s to do is produce images in the style of a particular artist. And the AI’s are quite good at doing this.

For example, look at this famous painting by Norman Rockwell:

The Runaway, By Norman Rockwell 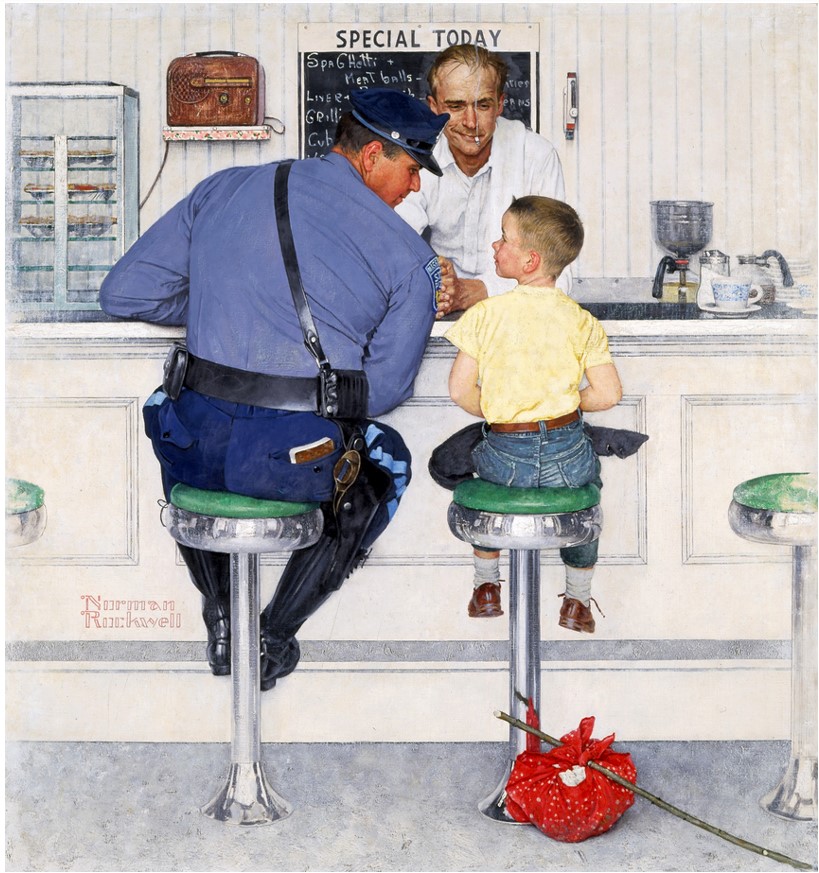 Here we can see Rockwell has a distinct style. His works were classic Americana with an exaggerated photorealistic style.

Now let’s compare it to an image produced by a generative AI:

A generative AI produced this image with the following prompt: “an adult and a child sitting at a café bar in the style of Norman Rockwell.”

As we can see, this image has some similarities in style to Rockwell’s classic above.

Of course, the AI can only do this because it’s been trained on images of Norman Rockwell paintings. And the artists are arguing that this is copyright infringement.

As such, the artists demand that the AI companies either pay for their work or they need to exclude all copyrighted material from their datasets.

The reality is that as the AI’s improve, the similarities in style will only increase. This begs the question… does the industry need to put licensing models in place before using copyrighted work to train AI’s? And if so, what should those models look like?

What the AI’s will produce will look more and more like a derivative work of art, rather than a unique, one-of-a-kind, original piece.

As we’ve discussed before, it’s not like the AI companies are purposefully incorporating copyrighted material into their datasets. Typically, these datasets are built by scraping the internet of publicly available content.

At the same time, there’s no doubt this material is an absolute boon for generative AI. These tools wouldn’t be nearly as powerful without it.

So I’m very interested to see how this all shakes out. We’re at the beginning of what will likely be a multi-year legal battle.

That said, I should point out that this is par for this course. Technology with the potential to disrupt entire industries is always met with backlash from those who stand most to be disrupted.

We’ll certainly be tracking this story going forward. But one thing I am sure of is that generative AI is here to stay. The genie is out of the bottle. It’s not going back in…

Microsoft is going all-in on AI…

The rumors were true.

Last week, we had a look at how Microsoft is integrating OpenAI’s suite of tools into its own product lineup. This includes GPT-3, ChatGPT, DALL-E 2, and even Codex.

As we noted, this is the most significant thing Microsoft has done in at least two decades.

And at the time there were rumors that Microsoft was considering another multi-billion investment in OpenAI as well. That’s on top of the billions Microsoft has already poured into the startup.

Sure enough, Microsoft just announced that it is moving forward with a $10 billion investment in OpenAI. This is huge.

If we look at Microsoft’s balance sheet, the company is sitting on $30 billion in net cash. That’s cash minus the company’s total debt.

What’s more, Microsoft laid off all its employees who were working on augmented reality (AR) and virtual reality (VR) technology. This suggests that the tech giant is making some very clear decisions about its project strategy going forward by giving up on AR and its HoloLens project.

A company can only do this if it’s fully supported by its board of directors. And the board must have absolute confidence in the proposed direction. Very rarely do we see such a bold move from a legacy incumbent like Microsoft.

But it makes perfect sense.

I’ve shared my thoughts about how Apple’s mixed reality headset will be the consumer electronics product launch of the year. And Apple has a history of defining product categories with its new product launches.

Microsoft is basically conceding the AR/VR/MR space to Apple while it triples down on AI. It’s a smart move. Through its “control” over OpenAI’s product distribution, it has a competitive advantage in the industry.

This new $10 billion investment in OpenAI is happening at an interesting time. Microsoft just announced that it is laying off 10,000 employees. I’ve already seen some very poor journalism suggesting that the AI is taking over Microsoft jobs, hence the layoffs. But that’s not the case.

The reality is that Microsoft hired too many people and overinvested across 2021 and 2022. It brought on board an incredible 40,000 new employees. So this latest reduction in workforce amounts to just 25% of that total.

Microsoft is honing its focus on A.I. and continues to look more and more interesting from an investment standpoint.

Again, I wouldn’t recommend shares of MSFT at its current levels. But if we get a significant pullback in the markets this year, MSFT could become a great investment target.