Semiconductor Manufacturing Is Coming to the United States

Editor’s Note: Yesterday, we shared part one of Jeff’s presentation on “The Great Recalibration”—the trend of reshoring advanced manufacturing. Readers can catch up right here.

Today, we share part two, where Jeff will discuss what this will mean for the semiconductor industry, and why we could soon see a “Silicon Valley of the East.”

A view into the Great Recalibration is the semiconductor industry. There’s a reason this industry is so important, and so ripe for this trend of onshoring manufacturing. And it starts with Taiwan.

Taiwan is the epicenter of the semiconductor industry. That’s because a company called TSMC is located there. This company produces—years in advance—the most advanced semiconductors on the planet.

Taiwan is also situated very close to China—about 200 kilometers away. If China were to take control of this island, we have a problem—a global problem.

Now, the common Western view is that Taiwan is fine. It’s very hard to land on Taiwan. There are military instillations. China couldn’t possibly breach Taiwan. But this view is wrong.

I worked in Asia as a technology executive for years. I’ve probably been to Taiwan a hundred times. And the reality is that China is already there. They’ve been in Taiwan for decades, slowly building administrative control just as they did with Hong Kong.

I was in Hong Kong when it was handed over from the British to China. What many didn’t realize is that this plan had been in motion for decades. China is brilliant at playing the long game.

And by the way, executives in the industry know this. They see it. And they’re taking action.

This is the most exciting thing I’ve seen from Intel in a decade. And it’s not happening in Silicon Valley. It’s extraordinary.

Samsung plans to spend $17 billion on a chip plant in Texas. And look at this. TSMC is spending $12 billion in Arizona. Why would they do that? They’re scared they’re going to be taken over. They need to diversify their supply chain.

Micron is looking to spend as much as $40 billion—maybe in Arizona, maybe in Texas. On Semiconductors—another favorite of mine—has committed $720 million to take over and expand a GlobalFoundries fab.

And GlobalFoundries—a smaller competitor to TSMC—wants to spend billions on a new facility in upstate New York.

One of my favorite small-capitalization companies also has a new fabrication facility in upstate New York. I had the chance to visit the facility. I’m the one in the middle. 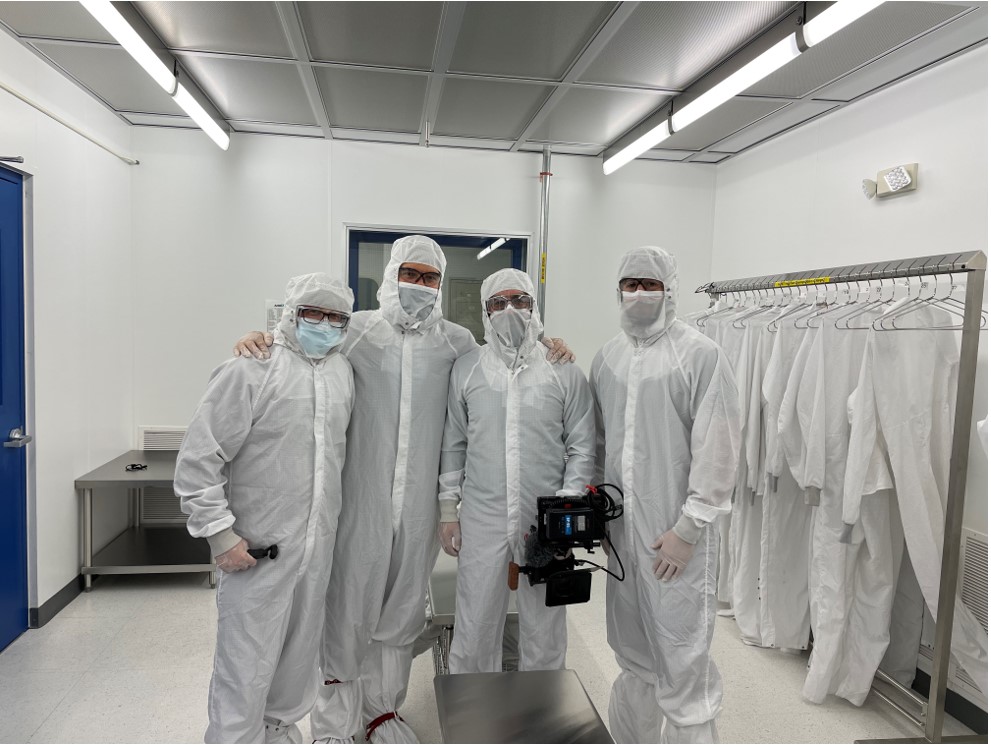 And there’s good reason to predict that this boom in advanced manufacturing infrastructure will continue.

[Editor’s Note: Since Jeff’s original presentation, the CHIPS and Science Act was approved by Congress and signed into law.]

Once it’s approved, it will be a boon for U.S. manufacturing. This is smart legislation. It incentivizes the right behavior. And the important thing is that all these announcements of new manufacturing plants came before the government offered up anything.

This push for reshoring has been very prominent with some executives in the industry. But it wasn’t until the past two years—with the semiconductor shortage—that it became very visible.

So, how do we solve this?

As with all the world’s great challenges, this one will be solved with advancements in technology. Specifically, the manufacturing centers of the next decade will be powered by artificial intelligence and robotics.

When we combine artificial intelligence with robotics technology, we get something I broadly define as “smart automation.”

On the artificial intelligence side, one chart gives us an idea of the type of progress being made.

This might look like a complex chart. But what it broadly shows us is raw computing power for machine learning systems. And we should keep in mind that this is not a linear chart. It’s exponential. And this is being powered by advancements in neural networks.

A neural network essentially allows an artificial intelligence to “think” or “infer.” In other words, it doesn’t have to be coded for very specific tasks. It’s incredibly powerful.

And on the robotics side, the technology is rapidly decreasing in price. In 2005, the average industrial robot cost about $68,000 to install. By 2025, that figure is projected to be around $10,000. And that means that even small and medium-sized businesses will be able to adopt this technology.

And when you combine these technologies—artificial intelligence and robotics—some very interesting things are possible.

For instance, what do we think of this?

Say hello to Optimus. This is Tesla’s vision for a bipedal, intelligent robot. And do you know what the press did when Musk announced this? They laughed at him. They thought it was absurd.

So, Musk can build reusable rocket ships? Tesla can build nearly autonomous electric vehicles. But Musk can’t do this? You’re darn right he can.

[Editor’s Note: Since Jeff’s presentation, Tela has unveiled a functional prototype of Optimus]

The combination of all these trends—the need to reshore manufacturing, the advancements in AI and robotics, the urgency from the industry to address this problem—is what I refer to as the “Great Recalibration.”

We are at the beginning of what will be a multi-year trend. It will improve our economies and our lives as a result. And of course, it will present some of the besting investing opportunities in the decade ahead.

Editor’s Note: We hope you have enjoyed this special edition of The Bleeding Edge. We will return with our regularly scheduled publication on Monday. As always, we thank you for being a reader.