Editor’s Note: Today is Thanksgiving, a market holiday. In lieu of our normal edition of The Bleeding Edge, today we have something special for subscribers.

Earlier this year, Jeff took to the stage in Washington, D.C. to speak at the Legacy Investment Summit. There, he outlined a bold prediction for the future of the high-tech industry. According to Jeff, a “great recalibration” is coming.

Today and tomorrow, we’ll be sharing excerpts from that presentation. Read on…

What I’d like to share today is a trend that I started researching in 2019. But you probably wouldn’t have believed me if I told you back then.

But enough has happened since then that I think it will make sense.

It’s time to talk about what I call the “Great Recalibration.”

It couldn't have happened 10 years ago, but it's happening right now.

In 2020, we were all forced into our homes. And that had a meaningful impact on our behaviors. One of those changes was online spending.

And of course, there were other impacts…

People spent a lot of time at home. And they got very comfortable. They wanted to spend more time at home. So, what did we do? We quit—in record numbers.

In November of 2021, 4.5 million people who were gainfully employed left their jobs. Does that make any sense? That was surprising. But it’s part of a larger trend that’s been playing out for over a century.

At the beginning of the 20th century, it was common for an average work week to be between 60 and 65 hours. Today, it’s usually less than 40 hours. This was largely a consequence of efficiency gains from technology. And it continues today.

One of the consequences of this is that job openings are going through the roof. As we’re sitting here, there are 11.5 million job openings. And we might be surprised what industries are looking for workers.

There are now more than 800,000 manufacturing job openings here on U.S. soil. That might shock some of us. U.S. manufacturing has largely been offshored over the past forty years or so.

But there it is. We have a huge need for more manufacturing workers.

Economies spent decades working towards globalization. That meant offshoring a lot of manufacturing where labor costs were lower. But this was done at the expense of domestic jobs—obviously. And it opened us up to supply chain disruptions.

When things are operating normally, this can work well enough. But what we found in the past twenty-four months is that there are critical vulnerabilities with this arrangement.

Basic materials, basic chemicals, compounds required for simple things like antibiotics; suddenly they could not be bought. Raw materials, electronic components, semiconductors—same thing. We have a huge problem.

There is only one way to solve this. We need to reduce systemic risk on a global basis. And to do that, we must reshore critical industries. And it’s already happening.

This trend started about ten years ago. But in 2016, 2017, and 2018, we saw new incentives put in place. And we saw a huge spike in new reshoring and foreign direct investments. That’s when a foreign company invests and builds manufacturing facilities.

But how is this possible?

Isn’t it so much cheaper to manufacture products in China? That has been America’s strategy for decades.

There are several negatives with this. There have always been quality problems. Often, products need to be reworked before they can reach customers.

And obviously, it’s expensive to ship stuff around the world, especially with fuel prices going through the roof. And then there’s the supply chain risks, which we already discussed.

But even aside from these concerns, we might be surprised to learn that labor costs in China are not as competitive as we might imagine. 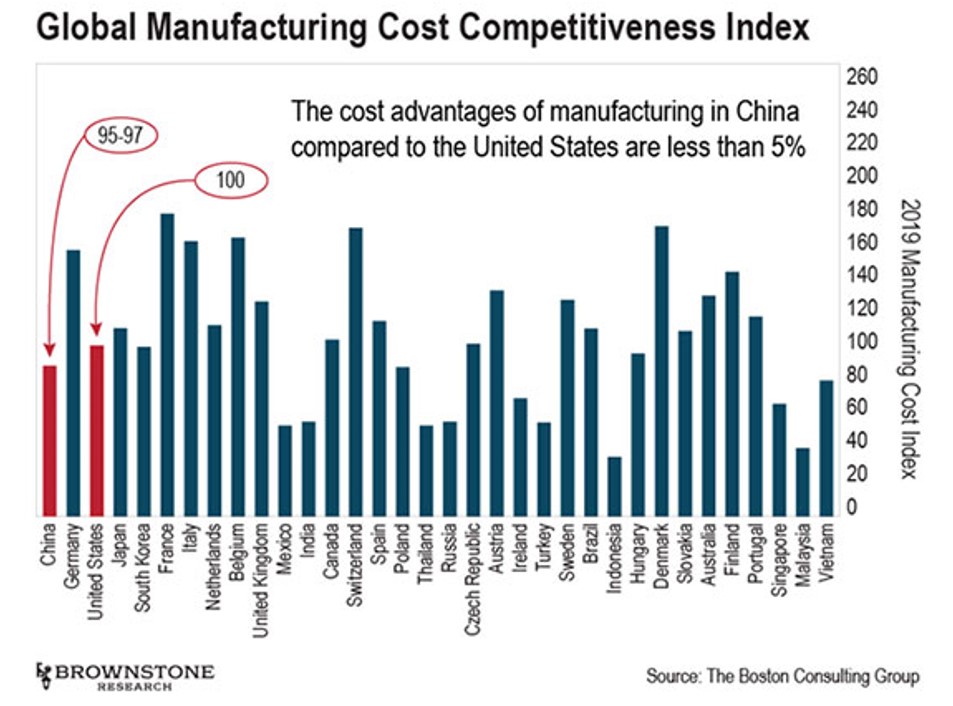 This chart is the manufacturing competitive index. In essence, it shows us the relative costs for manufacturing in different countries. The U.S. is indexed at 100. And what we’ll notice is that China is ranked between 95 and 97. That’s a very thin margin.

This is happening because of technological improvements. The U.S. is getting remarkably competitive when it comes to manufacturing.

And when we consider the benefits of having manufacturing on U.S. soil, close to customers, without all the risk of supply chain disruptions, U.S. manufacturing is even more appealing.

Of course, this does not mean that all manufacturing will come back onshore. Some industries, like clothing manufacturing, still requires a lot of manual labor. And it’s likely that will largely remain overseas.

But for truly critical industries? The industries that can employ advanced robotics to drive efficiency gains? The benefits of onshoring become too big to ignore.

And to give us a good example of this larger trend in action, it’s worth looking at the semiconductor industry. It’s a good proxy for advanced manufacturing.

And some very interesting things are happening in the semiconductor space…

Editor’s Note: Tune in tomorrow for part two of Jeff’s presentation on “The Great Recalibration.” What does it mean for advanced semiconductor manufacturing? Can the CHIPS act reinvigorate American manufacturing? All that and more in tomorrow’s edition of The Bleeding Edge.