Studying success; The Struggle of Building the Original iPhone; Picking up pennies in front of a steamroller; Examples: BBBY, PCTY, and negative-yielding sovereign debt; I had a painful scare last night

1) If you want to be successful, you should study other successful people – I started with Warren Buffett and Charlie Munger.

And if you want to be able to identify successful companies and products, you should study them as well. That's why my shelves are filled with books like Steve Jobs (AAPL), Direct from Dell (DELL), McDonald's: Behind the Arches (MCD), Pour Your Heart Into It (SBUX), The Emperors of Chocolate (HSY and privately held Mars), Built From Scratch (HD), In Sam We Trust (WMT), The Everything Store (AMZN), Elon Musk: Tesla, SpaceX, and the Quest for a Fantastic Future (TSLA), and Bloomberg By Bloomberg.

(As I looked up the links to all of these books, Amazon's website told me that I had bought many of them long ago – some as far back as the late 1990s. After reading them, it was obvious to me that they were great businesses run by great people... so why didn't I just buy and hold the stocks? I don't even want to do the math, but it's certain that if I had simply done so after I finished reading each book, my net worth today would be many multiples of what it is. What a sickening feeling!!)

2) Speaking of success, Apple's iPhone has been, by far, the most successful consumer product ever.

Since its launch in 2007, the company has sold more than 2.3 billion of them – and sales are still growing. In the past 12 months (as of the company's last reported quarter ending September 24), iPhone sales were a staggering $205.5 billion – that's more than the total revenue of all but 26 companies in the world, more than all of Microsoft (MSFT), and more than Pfizer (PFE) and Johnson & Johnson (JNJ) combined!

So I enjoyed watching this 34-minute video (17 at 2 times speed!), which was posted in October 2019 and has nearly 3.8 million views: The Struggle of Building the Original iPhone – The Untold Story.

3) It would be hard to find a better example of the perils of what's known as "picking up pennies in front of a steamroller," which I've heard credited to Nassim Nicholas Taleb, author of the influential 2007 book The Black Swan: The Impact of the Highly Improbable.

Last Saturday, during the NFL playoff game between the Jacksonville Jaguars and Los Angeles Chargers, the Chargers were coasting to an easy blowout win – leading 27-0 with two minutes left in the first half. At that time, a sports gambler decided to make what he surely must have thought was an easy $11,200 – but to do so, he had to bet $1.4 million. (I'm certain that the anonymous bettor was a man because no woman would be this dumb!) 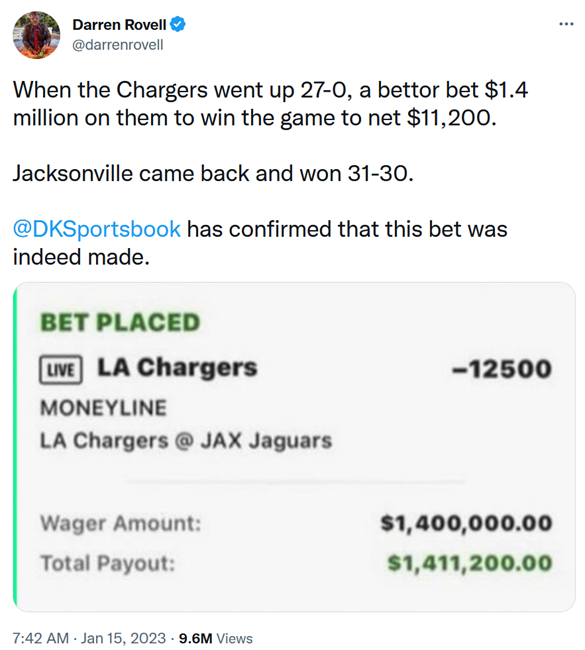 While this is an extreme case, I see behavior like this every day in the markets – especially in the debt markets, where buying bonds at par generally means there's no upside (unless you get lucky and interest rates fall), yet there's 100% downside.

Consider the example I gave in last Wednesday's e-mail, when I wrote that Bed Bath & Beyond's (BBBY) "August 2024 3.749% bonds, which traded at par as recently as March, are now trading for less than eight cents!"

In other words, 10 months ago, investors were buying bonds of a company that everyone knew was deeply troubled that, at most, would pay a paltry 3.749% for the next two years (that was the upside) but instead have declined by 92%!

Or how about the (mostly) institutional investors of the world who piled into sovereign bonds with negative yields – in other words, they were lending money to governments around the world and paying for the privilege to do so! This wasn't isolated foolishness – as recently as two years ago in December 2020, the amount of negative-yielding bonds peaked at $18.4 trillion. 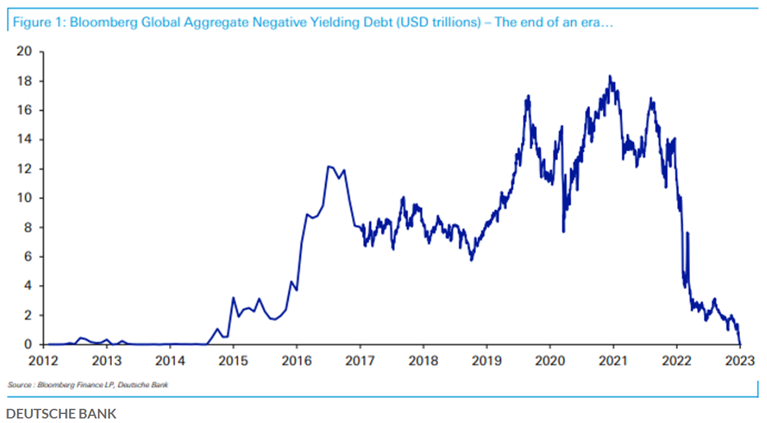 These "investors" (I use that term loosely) were seeking the world's safest investments, but they got lulled into complacency by decades of steadily falling interest rates and, as a result, got hammered when interest rates spiked.

All of these investors were picking up pennies in front of a steamroller, which worked for many years, until... SPLAT!

It's very easy to get lured into this kind of trap... Don't let it happen to you!

I was feeling some discomfort in my lower abdomen from 6 p.m. to 8 p.m. but didn't think much of it as I walked to the garage at 8:15 to drive to Randall's Island for my 9 p.m. doubles match (the first match of the new season with one of the three USTA teams I'm on).

But on the 10-minute drive there, the pain built rapidly... so I popped five ibuprofen and called my team captain to ask if anyone could step in for me.

Thirty minutes before match time, the answer was of course no, so I figured I'd try to gut it out and go to the emergency room afterward.

By the time I arrived at the tennis center at 8:40, the pain had spiked from a 2 to a 7, so after a couple of minutes in the lobby, I raced to my car and drove like a maniac back to the Mt. Sinai ER, which is only two blocks from my apartment.

The pain was absolutely crushing – so bad that I rolled down the window in case I threw up.

I called Susan, who was finishing a dinner with friends (her tennis buddies, ironically enough) and she hopped in a taxi and met me right as I arrived and took the car as I hobbled into the ER...

To this point, it followed the pattern of my four previous kidney stones (from 14 years ago to six years ago): discomfort in my bladder/kidney area/lower back building over a few hours (pain from 0 to 2), then rapidly spiking pain in less than an hour (pain from 2 to 9 – absolutely excruciating... far worse than the pain during my 24-hour races), which led me to rush to the ER, barely able to stand up.

It took them about 30 minutes to check me in and take me to a curtained area, where I begged for IV Dilaudid, a very strong opioid that instantly removes all pain, which is the only thing that had worked – beautifully and instantly – the previous four times (I can see why chronic pain sufferers get addicted to this).

In past cases, by the time the Dilaudid wore off three to four hours later, the kidney stone had passed and I was fine.

This time, however, as the physician's assistant went to get permission from the attending doctor to give me Dilaudid (it's much stronger than Oxycontin so a PA wasn't allowed to prescribe it), the pain disappeared – the kidney stone had passed quickly!

So I didn't end up taking any medicine at all (other than the five ibuprofen).

So if you're going to have a kidney stone, pray for a fast one!

As for why I keep getting these painful little bastards – the only one they examined in the past looked like an asteroid, but only 1 millimeter across – years ago I went to see a specialist, a nephrologist at Mt. Sinai. But even after a battery of tests, he had no answers, as I have no risk factors.

I do take two lemon extract pills every day, as lemons are supposed to help, and I try to drink lots of water.

After no stones for about six years, I thought I was in the clear, but I guess not...

Here's a selfie I took in the ER: 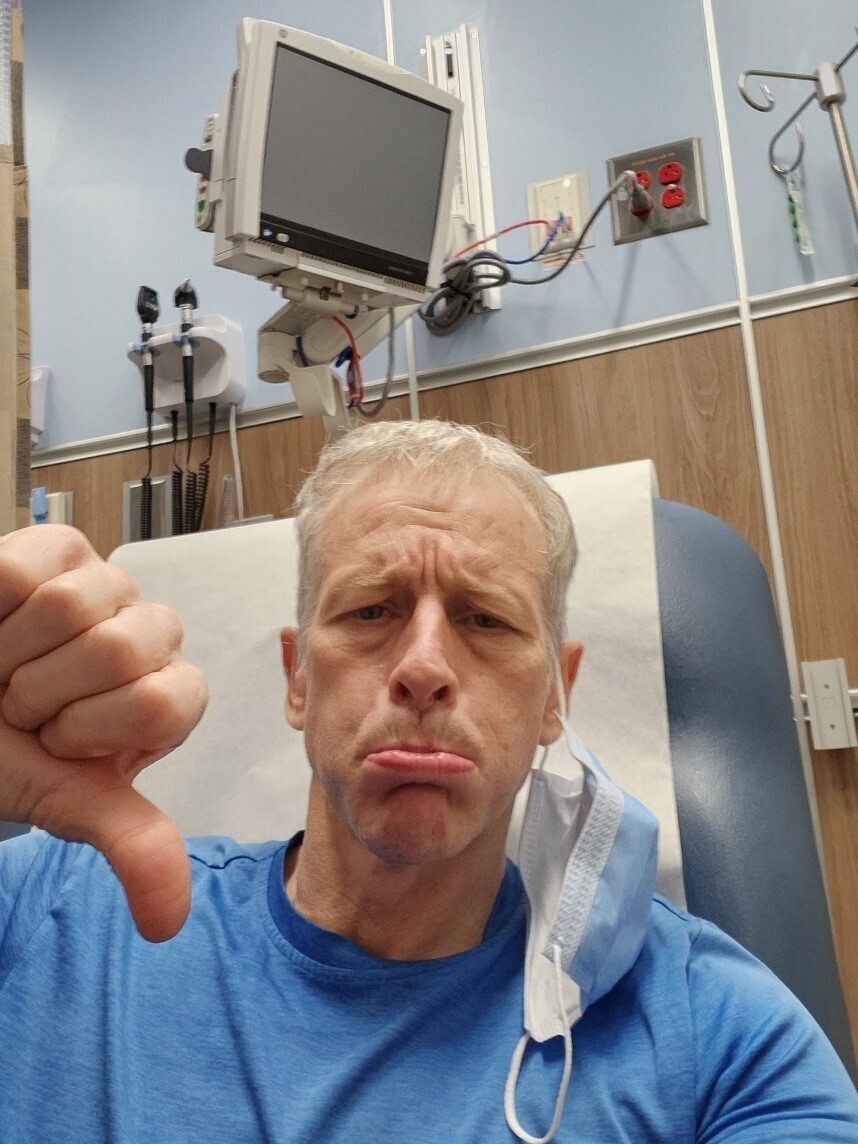