Mark Zandi on why we won't have a recession this year; My analysis of Wolverine World Wide; Howard Buffett is supporting Ukraine

1) Continuing my series on why I don't think we're going to have a recession this year – or, if we do, it will be a short and mild one – I enjoyed a recent interview that NYU marketing professor Scott Galloway did with Mark Zandi, the chief economist of Moody's Analytics. You can listen to it on Apple podcasts or Spotify (it starts at 13:07).

Zandi argues that few of the conditions that typically precede a recession are in place: most important, American consumers "are in pretty good shape: lots of jobs, low unemployment, lots of excess cash built up during the pandemic, leverage is low; even with housing values down, people are still a lot wealthier than they were before the pandemic."

He also added that corporate balance sheets are strong, government budgets are in decent shape (there are issues in the long term, but certainly no distress right now), and the housing sector isn't overbuilt (in fact, precisely the opposite: we've underbuilt by millions of homes – just ask anyone trying to buy a starter home especially – which is a major reason why housing prices haven't crashed, despite the unprecedented spike in interest rates).

2) Turning to another company that caught my eye at the ICR conference in Orlando last week...

The stock has crashed from $43 per share in May 2021 to close yesterday at $13.84 per share, close to a 13-year low. My bargain-hunting, value-investor, loves-to-buy-when-there's-blood-in-the-streets heart was beating rapidly as I listened to management tell its story...

For 22 years from 1991 through 2012, Wolverine was a beautiful growth company, as revenue and operating income marched steadily upward: 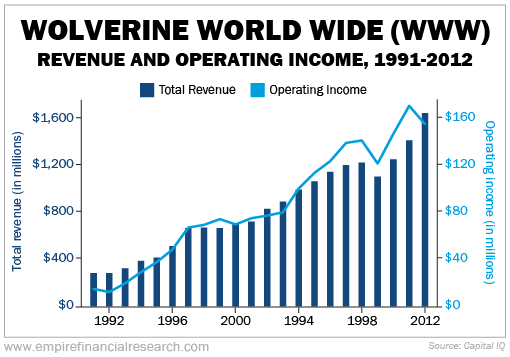 Not surprisingly, the stock was a fabulous performer over this period: 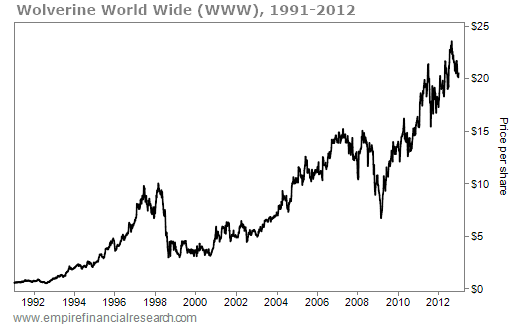 But in early 2012, Wolverine paid $1.2 billion to acquire Saucony, Keds, Stride-Rite, and Sperry Top-Sider in what the then-CEO called a "game changer" deal, which doubled the revenue of the company.

It was a game changer all right... The company has struggled ever since. As you can see in the next chart, after the deal closed in late 2012, revenue and operating income initially jumped in the subsequent two years, but then steadily declined before recovering in the past two years: 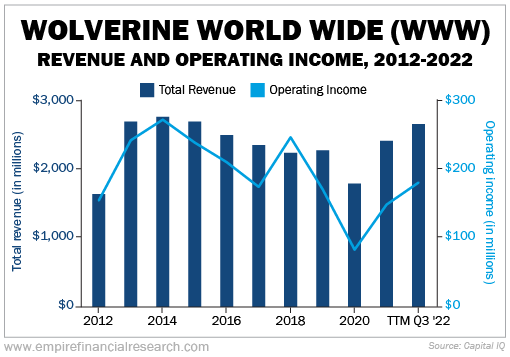 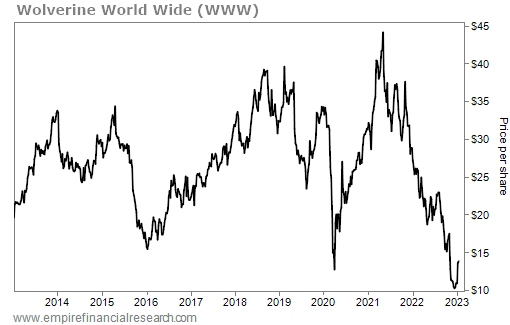 Let's take a closer look at the past three years...

The stock initially crashed (as did all of its peers) when COVID hit, then soared (again, like its peers), rising nearly 300%, but has collapsed over the past 20 months – which is odd, given that revenues and profits have risen over this period. Why the disconnect?

The answer is that Wolverine let inventories get totally out of hand over the past year. As you can see in this chart, which shows quarter-ending inventory going back to 2013, after very well-controlled inventory levels for nine years, they suddenly doubled: 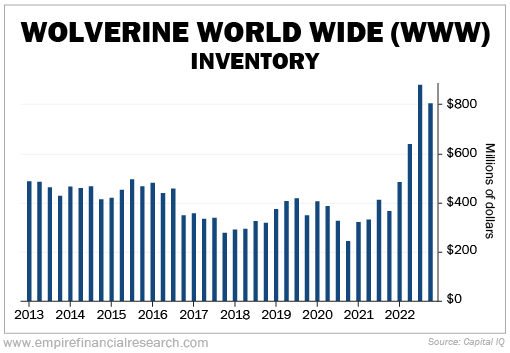 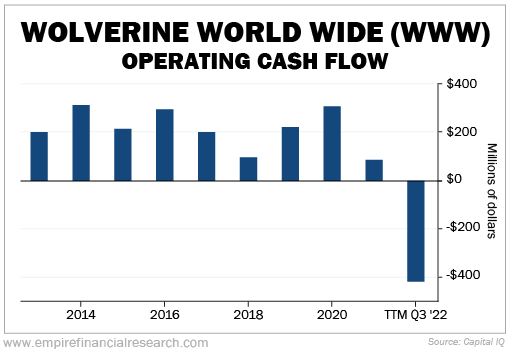 No wonder the stock tanked!

This is a perfect case study of how investors need to look beyond the income statement to the balance sheet and cash flow statement to see what's really going on...

At the breakout session with management, I asked the executives there to comment on the company's inventory levels. They said they know Wolverine has a huge inventory problem, but they have a clear path to bring it down to $550 million to $600 million. That's about half of the 2022 increase, but they said they plan to run with higher inventory going forward due to the Sweaty Betty acquisition (a $410 million deal in 2021) and greater concern over supply chain disruptions. The Wolverine executives said they already have agreements to sell most of the excess inventory but haven't yet shipped it, so it doesn't yet appear on their financial statements. They also added that they don't expect write-downs.

This all sounds reasonable, but it begs the question: How did inventory get so out of control in the first place? It's a major management misstep.

I looked at the management team and immediately saw that Wolverine got a new CEO at the beginning of 2022, Brendan Hoffman. And when I looked at his background on LinkedIn, I saw some warning flags: His prior job was CEO of apparel retailer Vince (VNCE) from October 2015 until September 2020, a period in which the stock went from $40 per share to $5 per share. And prior to that, he was CEO of Bon Ton Stores from February 2012 to September 2014. I can't see what the stock did then – because it went bankrupt in 2018!

This resume, combined with what happened to inventory in 2022, really makes me question whether Wolverine is a good bet for a turnaround.

That said, it might be a good candidate for a shorter-term trade, as selling down inventory will generate a lot of cash – and, assuming they are correct in having no write-downs, investors will likely respond favorably to this...

3) Three cheers for Howard Buffett, son of my hero, Warren Buffett, who's been to Ukraine four times since the war started and is supporting their fight in a big way with his $529 million foundation.

Ukraine is one of the world's great breadbaskets, a vast heartland of wheat, corn, barley and sunflowers. Its simple yellow-and-blue flag is a farmer's flag, evoking golden fields and endless sky. But since the start of the conflict, Ukraine's fields of rich black soil have been trampled by troops, cratered by artillery shells, burned and salted with landmines. For months, its vital Black Sea port was blockaded, keeping critical food aid from hungry countries and wreaking havoc on global food prices and supply. The situation remains perilous. Meanwhile, winter is closing in, many Ukrainian farms and crops have been destroyed, and the conflict shows no sign of ending.

All wars are brutal, but Russian President Vladimir Putin's onslaught has been particularly savage to civilians. Despite Russia's denial of responsibility, each week brings news of more humanitarian atrocities, mass graves and the systematic torture of soldiers and civilians...

No one knows when and how the war will end. When it does, it will take many years for Ukraine to recover. In the meantime, there are things we can do to help.

This is not a distant war that does not affect Americans. The foundation I run has long understood the relationship between food security and conflict. Americans are not insulated from the effects of far-off hunger, instability and violence. We must do everything in our power to keep Ukraine's farms productive and exports flowing. We know that Russians have stolen and sold Ukrainian grain to fund their war machine. They are bent on destroying the agricultural sector so the country can no longer feed the world or itself. These crimes must be stopped and prosecuted.

As Ukrainians courageously stand their ground, we Americans can help. Our foundation supported the first two shipments of grain for food aid through the Black Sea in collaboration with the World Food Programme and the U.S. Agency for International Development. Last summer, we donated thousands of pounds of vegetable seeds to Ukrainian families for home gardens. We are helping farmers clear their fields of mines.

I urge all Americans to summon that farmer-to-farmer ethic and pitch in where they can. On my last two trips to Ukraine, I had the opportunity to run some of the combines we donated, helping bring in the wheat and corn harvest under the blue Ukrainian sky. I know many fellow American farmers would be doing the same if they could.

I've arrived home to a new Congress taking shape, thinking about the bravery and determination of our Ukrainian friends and hoping U.S. leaders, regardless of party affiliation, continue their steadfast support. I'll continue to try to help Ukrainians any way I can and urge all Americans to join me.