Oil and Gas Are Back and Booming; An analysis of Container Store; The Best Buy Turnaround; Meeting a longtime reader

1) My colleagues and I have been bullish on the energy sector for quite some time, based on the belief that it's in a structural bull market rather than a cyclical one, which has been the case in the past.

That's why we recommended Schlumberger (SLB), which provides various services to the energy sector worldwide, in our August 2022 issue of Empire Stock Investor (it's up 64% since then).

This story on the front page of yesterday's Wall Street Journal captures many elements of our investment thesis: Oil and Gas Are Back and Booming. Excerpt:

This boom is different from earlier ones. In gas-production surges during the decade before 2020, many drillers expanded at a breakneck pace, loading up with debt to do so. They rushed into the Haynesville region when gas prices rose, but just as quickly packed up when prices fell, taking away the jobs, tax revenue and landowner royalties.

This time, domestic and international forces have the companies betting on steady demand for Haynesville gas for several years at least. In addition, their shareholders are insisting they return more of their profit to investors instead of using it to expand. It's a strategy that has positioned them to better handle swings in commodity prices, executives and analysts say.

Another difference: The windfall for producers is largely coming from exports, which limits the extent to which the increased production translates into lower prices for American consumers.

Among the reasons: There isn't enough pipeline capacity to send more gas from Appalachia's gas fields to populous areas such as the Northeast. By contrast, it isn't difficult to move large amounts of gas from a place such as the Haynesville basin to terminals on the U.S. Gulf Coast for shipping it in liquefied form to a Europe cut off by Russia.

This section captures what's happening not just at Chesapeake Energy (CHK), but across the sector:

When Chesapeake emerged from bankruptcy in early 2021, management eschewed growth and put priority on cash generation and investor payouts...

Chesapeake has returned to its roots with restrained ambitions. Its capital expenditures for the first nine months of 2022 totaled $1.3 billion, a far cry from the more than $14 billion the company spent in 2011. The rig count in the Louisiana gas fields, although at its highest point in a decade, remains far below levels in [Aubrey] McClendon's heyday.

Investors have been demanding returns such as dividends and buybacks over growth from an industry with uncertain long-term prospects. "That doesn't mean they won't let them drill, but they will prioritize return of capital," said Robert Kaplan, former president of the Federal Reserve Bank of Dallas.

2) On Monday I watched Container Store's (TCS) presentation at the ICR conference. I remember the company from nearly a decade ago when I shorted the stock not long after its IPO in late 2013, when it briefly traded above $40 per share.

It was a great short, as shares crashed 90% over the next two years to $4 (and today they sit near that level, closing yesterday at $5.14), as you can see in this chart: 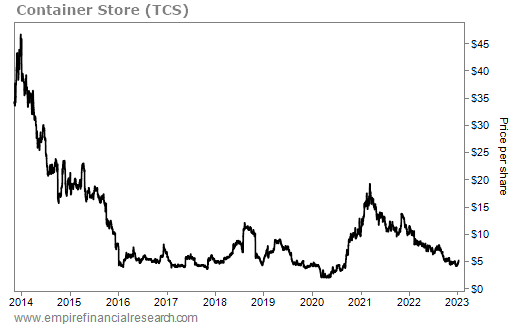 Given the total collapse of Bed Bath & Beyond (BBBY) – which, as I discussed in yesterday's e-mail, will soon file for bankruptcy – I was expecting to find a similar situation at Container Store...

Instead, I found a surprisingly resilient business. As you can see in this chart of revenue and operating income by quarter over the past decade, Container Store's business has gone through three distinct periods, as shown by the red arrows: 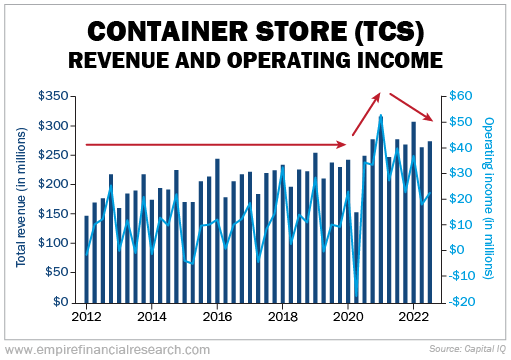 From 2012 until the pandemic hit, the business was roughly flat, which isn't bad considering the rise of Amazon (AMZN) and how Bed Bath & Beyond's business performed during this period. Then, Container Store had one bad quarter when the world shut down, but then soared as customers started spending on the homes to which they were confined. Lastly, as the world has reopened, Container Store's business has retreated – as has the stock, as you can see from the chart above.

The problem is that, as you can see in the chart above, Container Store's earnings are declining from a pandemic-fueled peak. The question is, where will the decline end?

Analysts currently expect the company to earn $0.85 per share in fiscal 2023, ending in March, declining to $0.78 the following year. That means the stock, at $5.14 per share, is trading at only 6.6 times next year's earnings.

If analysts are right and Container Store stabilizes earnings around $0.80, then the stock will probably do reasonably well because, based on where the stock is trading today, investors clearly doubt analysts' estimates.

And if the company is actually able to grow earnings, the stock could be a double or triple, given how low expectations are.

As such, I'm going to do some more work on this company... but I'm approaching it with a fair degree of skepticism, as this stock smells like a value trap.

I'm reminded of something my colleague Enrique Abeyta told me, which is very simple yet very insightful:

Of course, there are exceptions to this rule. Some stocks – as we saw at the blowoff top of the growth/tech stock bubble in late 2021 – can become so overvalued that they fall, even if earnings continue to grow strongly.

And some stocks get so beaten up that they perform well even if earnings continue to decline. That said, I can't think of many examples of this in my 20-plus year career...

3) It's not impossible for a declining retailer to turn around – just look at Best Buy (BBY)...

Its stock was a tremendous growth story from the late 1990s to its peak around $60 per share in 2006, but then declined to less than $12 per share in 2013 as Amazon gobbled up market share and investors feared that Best Buy would follow Circuit City into bankruptcy and liquidation.

But then, under the leadership of its new CEO, Hubert Joly, Best Buy completely turned things around and the stock rose by more than 10 times over the next decade, as you can see in this chart: 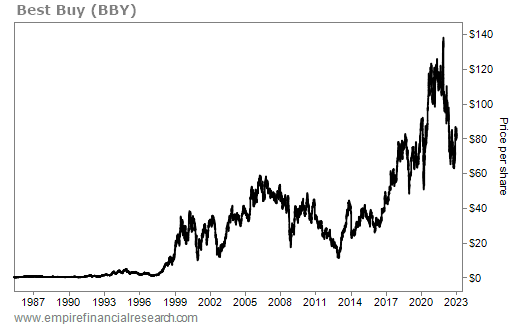 Here are two insightful articles about the turnaround:

So could Container Store become another Best Buy?

4) One of my longtime readers and Empire Lifetime Partners, Joe M., e-mailed me last week, said he was going to be in town last night, and asked if I wanted to get together. I said sure, and we had a very enjoyable chat.

He's from Denver, he flew F-16s for the Air Force for many years, and since then he has been a pilot at United Airlines (UAL), where he now trains other pilots (and, as a volunteer, he mentors cadets at the Air Force Academy).

Joe won big points when he told me that he recommends only two books to the cadets: David Clark's Tao of Charlie Munger and mine, The Art of Playing Defense.

He obviously got the memo that flattery will get you everywhere with me!

Here's a picture of us: 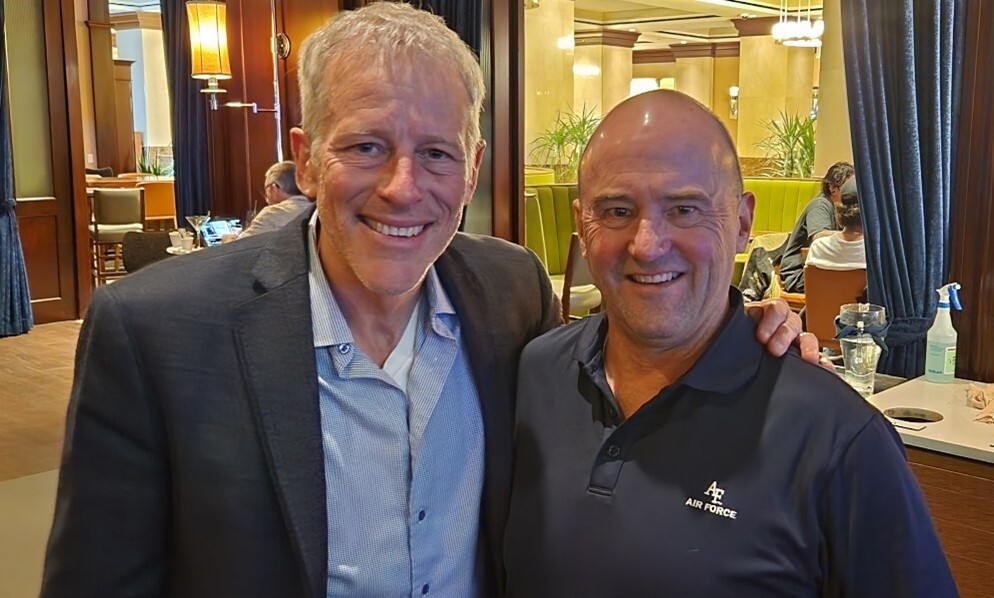 Thanks for reaching out, Joe!