The Simple Way to See Where the Market Is Headed

If there's anything that can give me an 'edge' – an idea of what the market is likely going to do next – I'm going to look for it...

Every day, I review hundreds of charts and countless indicators, divergences, and patterns. I use three different software platforms to gather technical information on the market.

It takes a lot of time and a lot of work.

But sometimes, it's best to just sit back and keep things as simple as possible. Now is one of those times. So in today's essay, that's what I'm going to do... And I'll use it to see what the market is telling us today.

Some of what I cover takes more than a day or two to master. It took me years to fully grasp this kind of analysis... and more important, to learn how to use the methods in real time (with real money).

It's quite simple if you think about it: Stocks either go up, sideways, or down. That's it...

For our purposes today, I'm going to cover stocks that are in a downtrend. A downtrend consists of a series of lower lows and lower highs... That's all there is to it.

Take a look at the iShares MSCI USA Momentum Factor Fund (MTUM). This fund tracks an index of large- and mid-cap U.S. stocks that show relatively higher price momentum. Right now, it's telling me the downtrend in stocks is intact... 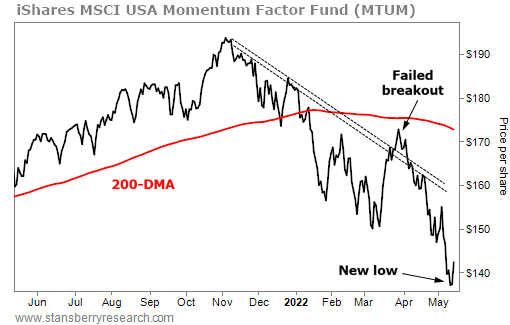 The black dashed lines from the highs mark the series of lower lows and lower highs. Yes, in late March, this fund broke the downtrend. But this was a false breakout... and really, it was a trap for bulls. After that failed rally, MTUM made a new low earlier this month.

Also note that MTUM couldn't muster up enough energy to rally above the important 200-day moving average (200-DMA) in red. This was a warning of continued weakness.

So, using trend-line analysis on this fund gave us a bearish signal. But as I often tell my subscribers, you can't just look at one market, like the S&P 500 Index, and think you have the entire technical picture figured out.

It's critical to look across many markets, indexes, and stocks to get the big picture. That's how you decide whether there's sufficient evidence that a market is topping out or bottoming.

In this case, I'm looking for evidence that stocks are continuing in a downtrend...

Let's compare the MTUM chart above with another favorite of mine, the iShares Russell 2000 Fund (IWM). This fund is a way to track U.S. small-cap stocks... 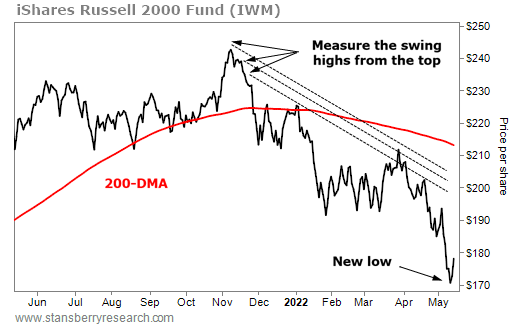 The takeaway is that you shouldn't just rely on one trend line – you have to use several to get a better idea of where resistance will be within a downtrend. Like MTUM, IWM is in a downtrend that's marked by lower highs... It made a lower low last week and is still below its 200-DMA.

I've been watching this last market closely – and it's not a U.S. index...

It comes from our friends in the north. Here's a look at Canadian stocks, through the iShares MSCI Canada Fund (EWC)... 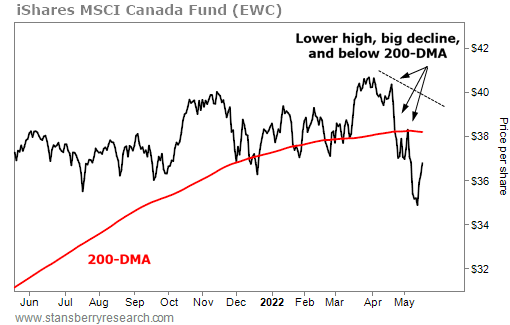 Canadian stocks have held up quite well, but not since late March. With this, we're seeing that all stocks are falling... The fact EWC can't hold up now means investors are running for the door.

EWC is now in a strong downtrend. Any rally that unfolds over the next few weeks will be an opportunity to sell.

Also note the big gap down from the major lower high... and notice that EWC is also trading below its 200-DMA now. That's not good.

I have just one last thing for EWC.

This is getting into a different aspect of technical analysis, but it's still easy to understand and use in your trading. There's a rare candlestick pattern forming on a monthly chart of EWC. Here it is... 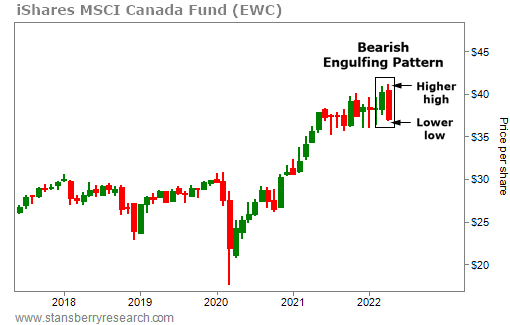 This is called an "outside reversal pattern" or a "bearish engulfing pattern," as the second candlestick (red bar above) "engulfs" the entire previous bar. The blue box marks this pattern.

Simply put, this is a bearish pattern...

It's a sign that sellers are winning over buyers. And because it's on a monthly time frame, it should be weighed heavily as evidence of a top.

If we combine it with the downtrend analysis for this fund, we have a high probability that EWC will struggle to make new highs in the weeks ahead. It doesn't mean we won't see relief rallies – we most certainly will. But these will likely lead to a number of trading opportunities to bet on a continued fall.

With a few simple clues, you can learn a lot about what the markets are doing. It goes to show that even basic technical analysis can give you an incredible edge... and help you make money even when stocks are down.

Editor's note: Greg nailed the market's pullback in 2022... and his readers booked gains of 111% in five days, 65% in 11 days, 101% in five days, and more. Now, he says a major turning point on May 25 could set you up for even bigger gains. He's revealing the details in an urgent new briefing. Get the details here.