Here's What the 'First Five Days' Rule Says About 2023

Editor's note: The Empire Financial Research offices are closed on Monday in observance of Martin Luther King Jr. Day. Look for the next Empire Financial Daily in your inbox on Tuesday, January 17, after the Weekend Edition.

One of the most popular types of market analysis is to look back at history and compare it with what's happening right now to draw a conclusion...

In my Empire Elite Trader service, we use this all the time when we look at how a stock has performed historically after reaching a certain oversold level in the relative strength index ("RSI").

Now, as we've all heard many times before, past performance doesn't guarantee future performance...

However, well-established patterns of past performance certainly can speak to the internal mechanisms of the stock market and give us some guidance to what is likely to happen next...

With that in mind, one of the most popular types of analysis is the 'January effect'...

The concept is that the performance of the stock market in January, especially the first five trading days of the year, can tell us something about how the market is likely to perform the rest of the year.

Like a lot of this analysis, though, it needs to be taken into context...

Remember that the vast majority (73%) of the time, the stock market is up for the year no matter what happens at the start of the year.

In Empire Elite Trader, we touched on this late last month when discussing why it's so rare for the stock market to have two down years in a row.

The "first five days" rule shows an even greater success rate. Since 1950, if the first five trading days of the year ended higher, the stock market was up 83% of the time with an average gain of 14%. In the chart below, you can see how it breaks down more recently... 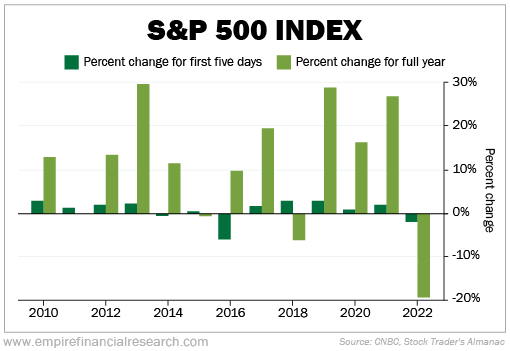 Given last year's horrific performance, we took a look at those 'failure' years to see if any of them had ever been preceded by an awful stock market year...

There were two instances where the "first five days" rule failed off the back of a terrible year the year before – 1974 and 2002.

These are important examples because both of them share aspects of the recent bear market.

The 1973 to 1974 period was characterized by high inflation and slow economic growth – the dreaded "stagflation." This is the scenario many analysts and strategists are calling for based on the current environment.

While we have obviously seen high inflation, it remains to be seen how persistent – and at what level – it will be in 2023.

The 2001 to 2002 period was the bursting of the dot-com bubble. With the recent bubbles in cryptocurrencies, special purpose acquisition companies ("SPACs"), Software as a Service ("SaaS"), and pandemic winners – we can see some strong analogies to the dot-com bubble period.

Like the "stagflation" scenario, however, there are credible arguments that much of the excess has been burnt away and – while there might be incremental damage – it may not be enough to pull down the overall indexes.

Beyond the first five trading days, there is an even more powerful impact from having a positive month of January overall...

This is called the "January effect."

We also looked here to see if any of these were preceded by a terrible year, and in this case there wasn't a single one that had a bad year prior.

What this means is that we've never seen the combination of a terrible prior year along with a failure of the "January effect."

This goes back to our discussion of the rarity of back-to-back down years.

Obviously with the stock market, each year is unique in its own right...

But these powerful patterns exist for very valid reasons.

On the back of a positive start to 2023, we're looking for a follow-through this month to signal a much better year than the last.

In the meantime, however, we'll continue to find short-term trading opportunities in Empire Elite Trader. With a tactical approach to trading, we can find opportunities to make money in any market.

So as we move into 2023, use the turn of the calendar year to take your trading to the next level. Learn more about Empire Elite Trader right here.